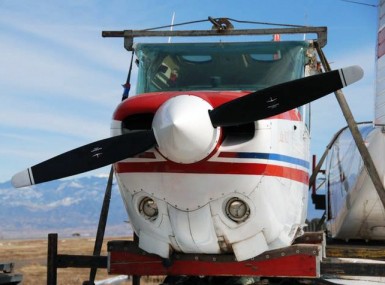 Motorists passing the Los Alamos County Airport recently may have noticed an airplane being disassembled. Some people stopped to watch the unusual activity Wednesday, Feb. 1, as the plane’s wings and tail were removed and its fuselage hoisted onto a large trailer.

“The plane’s road trip to an aircraft salvage yard in Colorado marked an ignominious end to a 30-year journey in the skies over an estimated half million miles between the Arctic Ocean and Mexico,” said one of its owners, Robert Gibson. 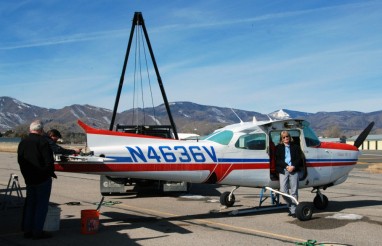 Co-owner Lori Heimdahl Gibson bids her plane a final goodbye as it’s disassembled on Feb. 1 at the airport.
Photo by Robert Gibson

“On the afternoon of Sept. 23, 2010, our plane was tied down at its usual parking spot between the airport runway and East Road,” Gibson said. “A county employee drove a large riding lawn mower into it from behind the right wing tip, tearing up an aileron (one of the plane’s main control surfaces) and twisting the aircraft against its tie-downs. Then it sat while the plane’s four owners, the county, and its insurers wrestled with the consequences.”

Gibson recently wrote a letter to his fellow aviators detailing the chain of events that led to last week’s dismantling and hauling away of “36 Victor” (planes are often nicknamed with the last characters of their registration.)

Excerpts from that letter begin with Gibson saying that the county accepted responsibility for the incident, so that was never an issue, he said.

“They said their goal then was to make us ‘whole.’ That turned out to be anything but true,” Gibson wrote in his letter. “The county’s initial responses focused only on repairing or replacing the obviously damaged aileron. We didn’t bite and had a responsible local aircraft mechanic inspect the entire airframe.” 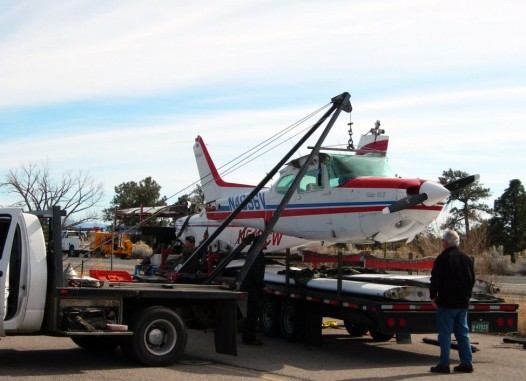 Disassembled plane is hoisted onto a flatbed truck for transport to a salvage yard. Photo by Robert Gibson

Gibson’s letter continued with him saying that damage, apparent without disassembly, included a twisted rear fuselage, bent right wing rear spar (one of two structural beams in the wing), overstressed wing strut forks and attachments, and overstressed control cables among other things.

“That evaluation forced the county and its insurer to recognize the severity of the incident,” he said. “They stopped trivializing – and began using the tactics to fight us for which some insurers are infamous. Obviously, our primary concern was structural integrity of the airframe. Hidden damage has brought many aircraft and their occupants to grief, sometimes years later.”

The county’s basic position was that they would only recognize the known damage, which they considered repairable, Gibson said.

“They refused to acknowledge any possibility of further damage or loss of value for an aircraft with such a history of major structural damage,” he said, adding that even if “repaired,” no one would buy a plane with such a history.

Essentially, the county refused to negotiate, Gibson wrote in his letter.

“A lawsuit would have cost as much as we likely could have gained (legal fees are not recoverable for this type of case) and prolonged the agony,” he said. “Eventually, we accepted an unfair settlement “in lieu of repair” just to move on. We then sold the wreck to an aircraft salvage firm.” 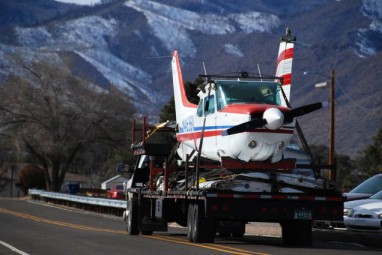 The disassembled plane heads down the main hill road toward the salvage yard. Photo by Robert Gibson

Gibson continued his letter saying, “From our perspective, we treated this as a simple accident. Such things happen. We expected the months of time and hassle, lost use of our property and indirect financial losses such events usually entail.”

In his letter, Gibson also said that had the county really wanted to “make us whole,” they could have at least tried to minimize the impact. Instead, they maximized it. The real tragedy was not so much the initial event as how the county subsequently dealt with it, he said.

“Our financial loss is somewhere in the low five figures,” Gibson said. “We also spent several hundred hours over 16+ stressful months directly or indirectly fighting with the county, dealing with lawyers, exploring salvage options, searching for a replacement aircraft … It sure took the fun out of aviation … one of the original four partners has quit flying altogether.”

Most accidents have deeper root causes, Gibson said, adding that this one likely did, too. “It is not apparent the county ever sought to find out and hence learn anything,” he said.

“I was serving on the county council at the time of the incident. Of course, I made it clear to everyone involved that my partners and I should be treated as would anyone else,” he said.

“As a former councilor, I’m ashamed of the county,” Gibson said. “They cared nothing about the immediate victims of their negligence or the lives of anyone who might ever fly in the plane in the future. They took as little responsibility as they could get away with. To the county, making us ‘whole’ meant: ‘Oops; we goofed. Screw you.’”