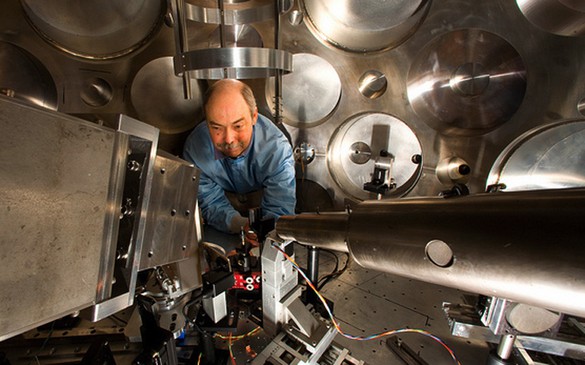 Tom Hurry of Plasma Physics adjusts the target positioner and particle beam diagnostics prior to an experiment at Trident. Courtesy/LANL 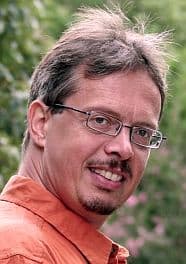 Using a one-of-a-kind laser system at Los Alamos National Laboratory, scientists have created the largest neutron beam ever made by a short-pulse laser, breaking a world record. Neutron beams are usually made with particle accelerators or nuclear reactors and are commonly used in a wide variety of scientific research, particularly in advanced materials science.

The laser light — 200 quintillion watts per square centimeter, equivalent to focusing all of the light coming from the sun to the earth (120,000 terawatts) onto the tip of a pencil — interacts with the plastic sheet, creating a plasma, an electrically charged gas. A quintillion is a one with 18 zeros after it.

The plasma then accelerates large numbers of deuterons — the nucleus of the deuterium atom — into a sealed beryllium target, converting the deuterons into a neutron beam. Using a unique property of plasmas called relativistic transparency, the deuterons are accelerated in just one millimeter rather than the many meters required by standard accelerator technologies.

“So far only at TRIDENT has this new plasma acceleration mechanism been successfully implemented,” said Markus Roth from the Technical University of Darmstadt, who serves as the 2012 Rosen Scholar at Los Alamos. “This result is the world’s record for short-pulse laser generated neutron flux, four quintillion neutrons per square centimeter for an object one centimeter from the source. In this generation scheme, the neutrons are emitted along the direction of the initial laser beam and can reach very high energies, in excess of 50 million electron volts.”

According to Roth, the new record is five times larger than the previous record and required less than a quarter of the laser energy.

“Neutrons are a unique probe with many scientific applications,” said Frank Merrill of LANL’s neutron science and technology group. “Neutrons are used to study fundamental properties of the universe, advanced materials, and have potential applications such as active interrogation of cargo containers, monitoring for clandestine nuclear explosives at border crossings, and as a test bed for fusion-relevant neutron diagnostics, the initial impetus for this study.”

This record neutron beam has the speed and energy range that makes it an ideal candidate for radiography and a wide variety of high-energy-density physics studies.

“An object placed one centimeter behind the source would be exposed to more than 40 neutrons per square micrometer (one millionth of a meter) in less than a nanosecond (one billionth of a second) making it an impressive probe for radiography applications,” said Merrill.

“Also, for the first time, in these experiments a neutron image driven by a short-pulse laser was realized and showed excellent agreement with numerical calculations,” said Roth. Using short-pulse lasers for the production of neutrons can open the field of neutron research to universities, and a broader research community in general.