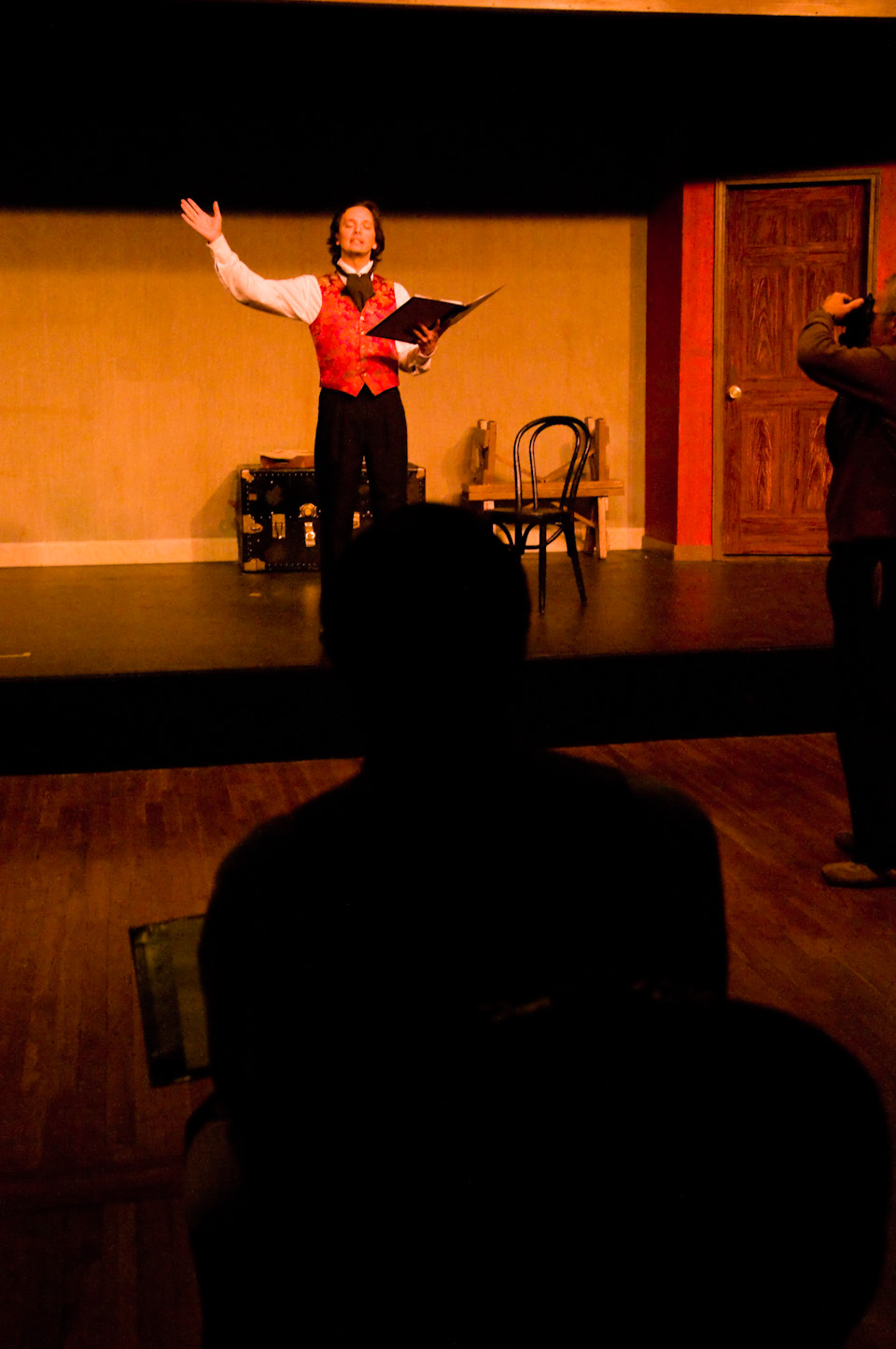 Do not miss The Woman in Black at Los Alamos Little Theater through Nov. 11.

Not only do I guarantee you’ll be creeped out, this is a play that makes you think, and the production is outstanding.

“The Woman in Black,” adapted from the book by Susan Hill by Stephen Mallatratt, premiered in 1987 and has been running steadily on the London stage since 1989.

Don’t think that just because you saw the movie version, you should skip this play. Seeing the story on the stage is an entirely different experience.

The play is a send up of the classic English ghost story—deserted manor house, spooky salt-marsh, deserted graveyard—it’s all here.

There’s even a nod to “A Christmas Carol” during the opening scene. The time-period seems roughly Victorian, but you’re never quite sure.

The tale seems to exist in ghost-story time—there seem to be automobiles, but everyone’s dressed in those classy Victorian outfits.

The play opens in a small theatre. Arthur Kipps, a middle-aged solicitor, has hired a theatre and the services of a professional actor to help him re-enact, and thereby hopefully exorcise, terrifying events, which befell him many years before. The action proceeds as a play within a play.

The Woman in Black is as much about the imagination and the magic of the theater as it is about the haunted happenings on Eel Marsh.

There are only two actors, using minimal props and sound effects to bring the story to life. Kipps (Warren Houghteling) is initiated into the world of the theater by The Actor (Patrick Webb.)

Together, slowly at first, they begin to build a world on their stage, and as they do, the audience falls deeper and deeper under the spell.

The performances of Houghteling and Webb are two of the finest I’ve ever seen in Los Alamos. The two men carry the entire play, with Houghteling required to change clothes, accents and personalities over and over as he portrays all the characters in the play with the exception of himself as a young man (the role played by Webb.)

We watch him take a new hat from the rack and become another person. It’s happening right there in front of us, yet we believe in it—theater magic.

Movies have come to rely on special effects and gore to make us afraid. In this play we’re very subtly manipulated into belief.

There’s a thin veil between the real and the imagined. What convinces us something is true? How do we decide if our senses are deceiving us?

It’s not giving too much away to say that the terrible events that precipitate the haunting in The Woman in Black concern the death of a child and a mother’s grief and desire for revenge.

The Weeping Woman, La Llorona, is only one example of this motif. The death of a child evokes a sense of wrongness in the universe that leaves the gate open the mysteries outside of mundane life.

It’s from this sense of wrongness that the story draws its power.

In the early scenes, there was some laughter at the culturally stereotypic characters—the sniffling clerk, the taciturn retainer—but as the play progressed, the laughter died away and the audience was on the edge of their chairs.

It reminded me how closely the comic and the terrifying are related. We cling to the comic to keep the strange at bay.

The minimalist sets, especially the haunted room, really set the mood. Hats off to director Laurie Tomlinson and the entire cast and crew for a wonderful theater experience.

The Woman in Black opened at 7:30 p.m., Nov. 2 and will run Friday and Saturday evenings at that time for three weekends.

Tickets can be purchased at CB FOX or at the door the night of each performance.

To read the latest LALT Newsletter and to learn more about “Woman in Black,” visit www.lalt.org.