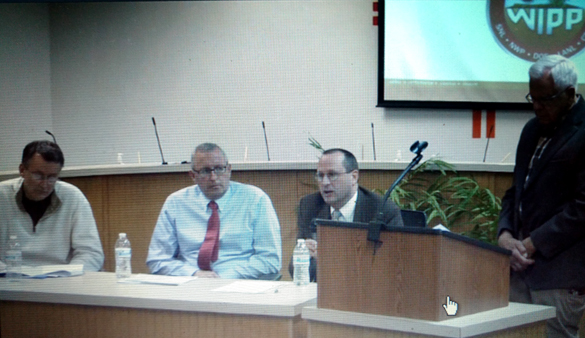 Thanks to Internet video streaming, informational meetings in the two-and-a-half year struggle to re-open the Waste Isolation Pilot Plant (WIPP) in Southern New Mexico are accessible not only to the people of Carlsbad but for people throughout the state and nation.

“This has been a little bit of a long process to get to where we are,” John Heaton said at Thursday night’s Carlsbad Town Hall Meeting. A former state representative and the regular meeting moderator, Heaton added, “We’re very close to the point where we will be open and getting waste down into the mine and out of the biosphere, if you will, and never have to look at it again.”

Since a truck fire and a radiation leak in February 2014, the employees of the Department of Energy and WIPP have been working to get the underground repository cleaned up and procedurally qualified to resume its task of storing the nation’s mounting backlog of radiological material. On hold during this time have been hundreds of shipments from Hanford, Washington, Idaho National Laboratory, Savannah River Site in South Carolina, and Los Alamos National Laboratory, which was the source of an erupting canister that caused WIPP to shut down.

Thursday’s meeting focused on a Department of Energy Operational Readiness Review, one of the final steps in the process, a point by point technical evaluation of the people, equipment and procedures that are responsible for the safe operation of the plant.

The bottom line, according to DOE’s review team leader, Ed Westbrook, was 36 findings, 21 of which will have to be fixed before operations can begin, and 15 that can be taken care of after the restart.

“I think that’s about what I would expect for a site that’s in very good shape,” Westbrook said, emphasizing that the failures on the whole were minor, “not a trend or indicative of a bigger problem.”

On the list of required improvements were strobe lights in the mine to signal evacuation, staffing for emergency medical teams, which needed someone to perform cardiopulmonary resuscitation (CPR) within four minutes, and permanent power availability rather than temporary power for the interim ventilation system. Fire hazards, no matter how incidental, were treated as major, because fire was one of the main occurrences that caused the shutdown.

A prescription that seemed more than incidental, noted that “fire protection documentation that ensures implementation of appropriate engineering and administrative controls to maintain safe operations have not been fully implemented.” Another finding concerning radiation protection baldly stated, “NWP does not have an effective process in place to ensure a consistent, timely and appropriate level of radiological personnel response to radiological events.” This was indicated as a pre-start requirement.

Other matters were relatively minor, like boxes on a form that were checked “no” when they were supposed to be checked “yes,” and missing signatures on some documents.

On the whole, Westbrook said, “We didn’t really find anything we call a ‘showstopper.’

The number of findings bothered Norbert Rempe, a former employee, who has followed WIPP’s restoration closely. The list of requirements; he was told by the officials, was an indication of how deep and broad the review process had been. They said the main job now is closing out the pre-start list, which is well underway, although the actual finish line is still difficult to predict. Of the mandatory pre-start requirements, only six out of 21 have been closed with only a couple of weeks to go.

The officials were asked whether the project would meet Energy Secretary Ernest Moniz’s commitment to finish before the end of December. “Our goal, based on everything we know, continues to be December,” said Carlsbad Field Office Manager Todd Shrader. “Safety is a priority and doing it right is a priority for us.”

He also said employees were working seven days a week these days to get there, which prompted a question about whether the contractor had been promised bonuses as a premium for making the December deadline. Phil Briedenbach, the president and project director of the Nuclear Weapons Partnership that manages WIPP answered emphatically, “There are no bonuses tied to WIPP.”

“I don’t believe that there’s a crisis or rush that requires workers to be working seven days, and over Thanksgiving and Christmas,” said Don Hancock, of the Southwest Research and Information Center in Albuquerque. “To me, that makes a dangerous situation even more so. Tired workers don’t do their best work anywhere, let alone in an inadequately ventilated, radiologically contaminated mine.”

As moderator, John Heaton had the last word: “Six out of 21 completed … a long way to go, maybe. Hopefully soon.”