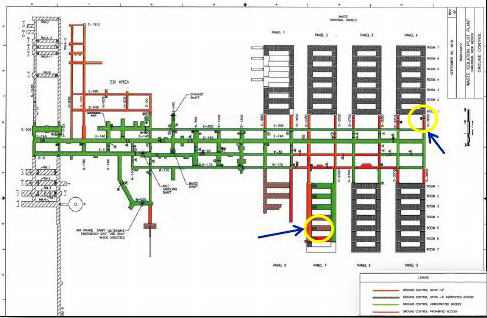 Salt rock debris was discovered by ground control crews Tuesday, Sept. 27 during routine monitoring and inspections of the Panel 4 entrance within the WIPP underground.

Panel 4, one of the most southern portions of WIPP, was closed in 2010 and consists of seven disposal rooms filled with transuranic (TRU) waste. No WIPP personnel were present at the time of the salt rock fall, as the area had already been under restricted access – requiring management approval to access – since March 2016.

Recently, access was more strictly prohibited – no personnel entry allowed – since Sept. 21, when geotechnical engineers discovered that a temporary closure bulkhead in Panel 4 was bulging from pressure exerted from natural movement of the salt.

Since Panel 4 access drifts were closed in 2010, in accordance with procedures approved by the New Mexico Environmental Department, an internal review post- rock fall indicated that no personnel have been in the entrance of the panel for over six months.

The deformation of bulkheads, like the entrance to Panel 4, is due to natural “salt creep” – which is one of the reasons that salt is the chosen disposal medium for TRU waste. This salt rock fall occurred in the access drift near a filled and closed panel, well away from the area where waste emplacement operations will take place. Nuclear Waste Partnership (NWP) is working closely with the workforce and their geotechnical experts to identify any additional areas of the underground that may need to be closed because of ground control concerns.

WIPP’s ground control team is responsible for monitoring the movement of the salt in open areas of the mine. Ground control is one of the highest priority operations to ensure the safety of the WIPP workforce. The area where the rock fall occurred had already been restricted to worker access due to previous findings.

Certain underground areas at the south end of the mined areas have been restricted, and only geotechnical experts performing ground control inspections can enter with authorization from NWP senior management. This event occurred far from currently planned waste emplacement operations and is not expected to affect the resumption of waste emplacement activities.

Today, Oct. 3 marks the beginning of the Contractor Operational Readiness Review (CORR). Having successfully started up the new Interim Ventilation System and closed out all of the pre-start findings from the Management Self-Assessment (MSA) and the CORR Plan of Action pre-requisites, NWP held their kickoff meeting earlier today. Last week, NWP completed the remaining pre-start activities, including a successful demonstration of waste emplacement in the underground using full personal protective equipment.

NWP is utilizing a team of independent subject matter experts to conduct the CORR, which focuses on the following:

“Think of it this way,” said NWP President and Project Manager Phil Breidenbach, “the Management Self-Assessment was like a chapter test, the CORR is the mid-term exam, and the Department of Energy Operational Readiness Review (DOE ORR) will be the final exam. I’m very proud of our workforce.”