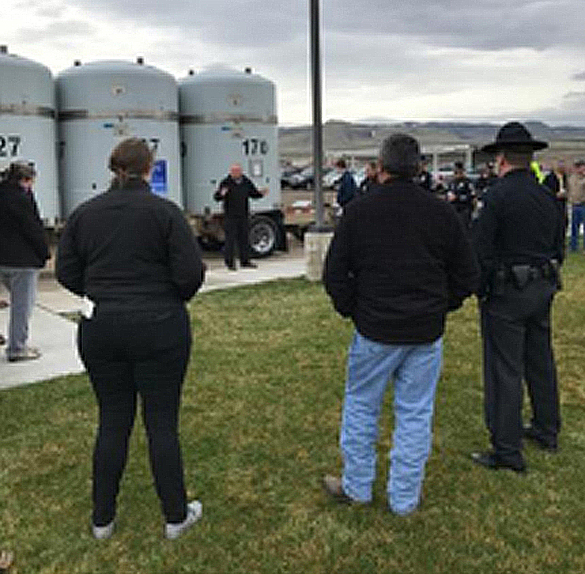 Idaho State Trooper and commercial vehicle enforcement officer Tony Anderson speaks to attendees March 27 at the kick-off of the WIPP Road Show for the western corridor shipping route at Fort Hall, Idaho. Courtesy photo
WIPP News:
In preparation for the resumption of shipments of transuranic (TRU) waste to the Waste Isolation Pilot Plant (WIPP) near Carlsbad, the U.S. Department of Energy’s (DOE) Carlsbad Field Office (CBFO) is supporting “road shows” sponsored by state and tribal authorities along the transportation routes to WIPP.
Shipments to WIPP were suspended in February 2014 when two unrelated incidents, an underground salt haul truck fire and a radiological release that occurred as a result of a chemical reaction in a waste drum, caused the temporary closure of the facility. WIPP officially reopened in January of 2017 and shipments from TRU waste generator sites across the DOE complex are expected to resume in April 2017.
Since it began in 1999, the WIPP transportation program has maintained an excellent safety record, thanks to strict driver qualifications; rigorous inspection requirements for trucks, trailers and packages; use of Type B containers certified by the U.S. Nuclear Regulatory Commission (NRC); and the close coordination and planning with states and tribes that goes into preparation for shipping.
The road shows are open to the public and are intended to provide local elected officials, members of the public and the media with the opportunity for an up-close look at the truck, trailer and TRUPACT-II shipping packages and a chance to learn more about the rigorous WIPP transportation protocols designed to ensure the safe transport of TRU waste.
WIPP representatives, inspectors from the Commercial Vehicle Safety Alliance, local emergency response personnel and truck drivers are on hand and available to provide information and answer questions on the WIPP transportation system.
WIPP road shows have been conducted throughout the month of March along the shipping routes from waste generator sites around the country to WIPP. Earlier this month, road shows were held in the communities near WIPP, followed by the southern route, which includes the states of South Carolina, Georgia, Alabama, Mississippi, Louisiana and Texas.
Like Us on Facebook
The Carlsbad Field Office recently added another communication tool to help stakeholders stay informed about what’s happening at WIPP. The WIPP Facebook page provides brief highlights of information on all facets of the WIPP program, so be sure to like us on Facebook at WIPP – Waste Isolation Pilot Plant. You can also find us on Twitter @WIPPNews. These social media channels will also be important vehicles to share information with stakeholders in case of a WIPP emergency, so be sure to look us up.
Menu
LOS ALAMOS