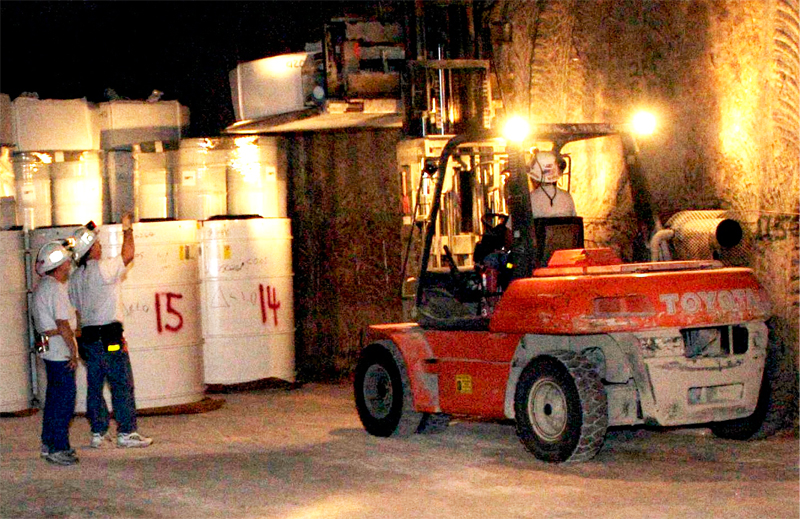 Due to some confusion in recent news reports, here is a more detailed explanation of the use of magnesium oxide (MgO) at WIPP. The magnesium oxide, a dry chemical, is not used to weigh down waste containers in the WIPP underground as one news outlet reported. The material is used as an engineered barrier to prevent radioactive material from releasing into the environment over a 10,000-year period, as required by the U.S. Environmental Protection Agency’s (EPA) disposal standards for radioactive waste.

Magnesium oxide is packaged in large bags that weigh between 3,000-4,200 pounds and are placed on top of waste containers during disposal operations. During entries into Room 7 of Panel 7 during the past week, workers discovered that several of the bags were damaged. The cause of the damage is still unknown.

During future entries, employees will collect samples of the magnesium oxide for laboratory analysis and continue camera inspections of the suspected location of the event source.

Based on recent entries into the WIPP underground facility, the team is evaluating the contents of a set of waste drums that came from Los Alamos National Laboratory (LANL) that are located in Panel 7, the location of the event. The team is looking at the possibility that a chemical reaction may have occurred within a drum, causing a potential release.

To maintain our commitment to the protection of workers, residents, and the environment, shipments of a specific LANL waste stream to Waste Control Specialists have been temporarily halted. As part of the ongoing efforts to identify the cause of the Feb. 14 event at the Waste Isolation Pilot Plant, we are evaluating all possible causes including the waste packages themselves. All possible scenarios will be thoroughly investigated until the cause of the event has been determined.