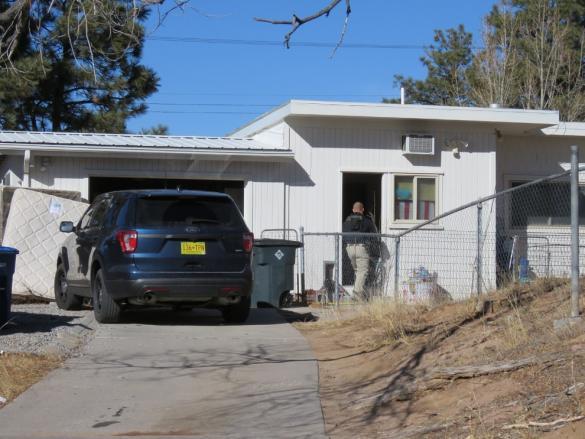 A Los Alamos police detective enters the Orange Street residence of Krista Wilhelm Jan. 24 during the execution of a search warrant. Photo by Leland Lehman/ladailypost.com 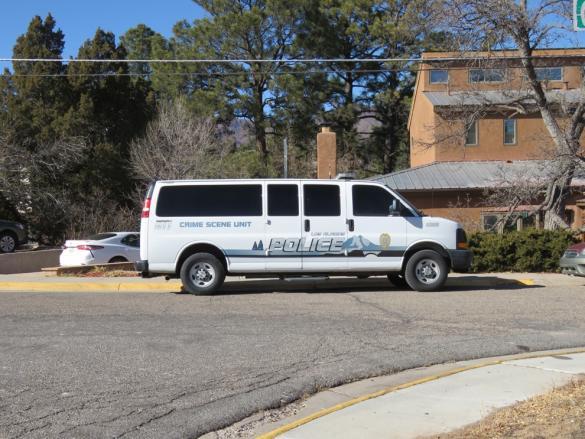 Krista Wilhelm, 33, of Los Alamos is back in jail on charges in two new cases just weeks after she was given supervised probation in three prior Los Alamos Magistrate Court cases.

Charges of abuse of a child, battery of a household member, unlawful taking of a motor vehicle and use or possession of drug paraphernalia were dismissed by Deputy District Attorney Michael Nunez under that plea agreement. Judge Pat Casados ordered the two probation periods to be served consecutively and that Wilhelm participate in and successfully complete outpatient treatment during the entire duration of her probation.

The charges of abuse of a child and battery against a household member were related to a domestic disturbance at Wilhelm’s residence where she allegedly returned home after partying for several days and proceeded to hit and push the victim while he was holding an infant child. The use or possession of drug paraphernalia was filed after police removed some 50 hypodermic needles from her home.

Wolking’s statement of probable cause states that he was contacted Jan. 24 by a man who turned over methamphetamine, Suboxone and a check belonging to Wilhelm’s mother for $95, which the man said he received from Wilhelm. Wolking alleges the man reported that he had been with Wilhelm and others for four or five days, that they had all been consuming methamphetamine and heroin, and that Wilhelm had supplied the Suboxone.

Wolking obtained a search warrant the same day and he along with several other officers searched Wilhelm’s residence. The statement of probable cause indicates Wolking located several needles but based on information collected the last time he searched the residence, he left those behind. Officers allegedly found the drug paraphernalia listed in the criminal complaint. Following the search, Wolking’s statement says he left a copy of the search warrant on Wilhelm’s bed and secured the residence.

Wilhelm was arrested Feb. 7 due to the new charge, which violated the terms of her probation. Wolking filed four new charges against her Feb. 12, including possession, delivery or manufacture of drug paraphernalia, one count of forgery and two counts of conspiracy to commit forgery.

In his statement of probable cause in this second case, Wolking said he interviewed Wilhelm following her Feb. 7 arrest and though she changed her statements several times, she made several confessions. One was allegedly that she provided clean needles to others and the remainder were related to checks belonging to her mother, which resulted in the forgery and conspiracy to commit forgery charges. The statement of probable cause indicates that interviews also were conducted with others in order to determine what had transpired with the checks.

Arraignment on the possession of drug paraphernalia case is set for Feb. 26, however no hearings have been set in the second new case.