Why Can We See And Hear Meteors At The Same Time? 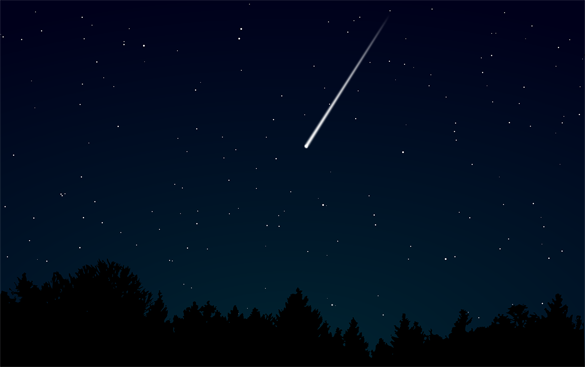 A new study explains why we can hear meteors at the same time as we see them. Courtesy photo
By LAUREN LIPUMA
AGU Blogosphere
Light travels nearly a million times faster than sound. But for thousands of years, humans have reported hearing some meteors as they pass overhead, puzzling scientists for decades.
Now, a new study puts forth a simple explanation for the phenomenon: the sound waves aren’t coming from the meteor itself. Instead, radio waves created by the meteor convert to sound waves when they strike metal structures on Earth.
Edmund Halley – namesake of the famous comet – wrote the first published account of this phenomenon in 1714. In that paper, Halley described a meteor passing over Italy in 1676.
“It cannot be wondered that so great a body moving with such an incredible velocity through the air, though so much rarified as it is in its upper regions, should occasion so great a hissing noise, as to be heard at such a distance as it seems this was,” Halley wrote.
Since then, scientists have tried to explain how light and sound from the meteor seem to reach humans at the same time. Meteors tend to vaporize around 100 kilometers (60 miles) above Earth’s surface. At that height, it should take sound waves about 10 minutes to reach human ears on the ground.
One previous theory suggested the noise is a result of the meteor’s magnetic field becoming twisted by turbulence in its wake. Another suggested light from the meteor could heat materials such as hair, clothing and leaves to produce sound.
But these theories rest on complex mathematics, and it’s more likely that a simple explanation is the key, said Michael Kelley, an ionospheric scientist at Cornell University in Ithaca, New York, and lead author of the new study published in Geophysical Research Letters, a journal of the American Geophysical Union.
Kelley points out that the cloud of dust and gas that forms around the head of a meteor as it vaporizes – its coma – becomes highly charged, much like the ionization that occurs around spacecraft during reentry that causes temporary loss of radio contact with returning astronauts. The cloud of charged particles creates an electric field, and that field creates a current that generates radio waves that propagate to the ground.
Electromagnetic radiation can sometimes be converted into audible sound in a principle known as electrophonics. Kelley’s theory suggests that metals on Earth’s surface convert those radio waves generated by the meteor into sound waves people can hear.
A lot of energy gets lost in the conversion of radiation to sound, but for a meteor, the conversion only needs to have an efficiency of 0.1 percent for humans to hear it, according to Kelley.
The new theory could also help solve another scientific conundrum.
Indigenous peoples of the high latitudes have reported being able to hear the aurora, which are known to also generate strong radio waves. The electrophonic effect could explain how this is possible, Kelley said. He hopes the new study will inspire researchers to delve into the topic.
“It’s usually the simplest thing that’s right,” Kelley said.
Menu
Los Alamos
48°
Fair
7:18am6:20pm MDT
Feels like: 48°F
Wind: 0mph NNE
Humidity: 24%
Pressure: 30.31"Hg
UV index: 1
SatSunMon
64/45°F
63/43°F
66/46°F
Weather forecast Los Alamos, New Mexico ▸