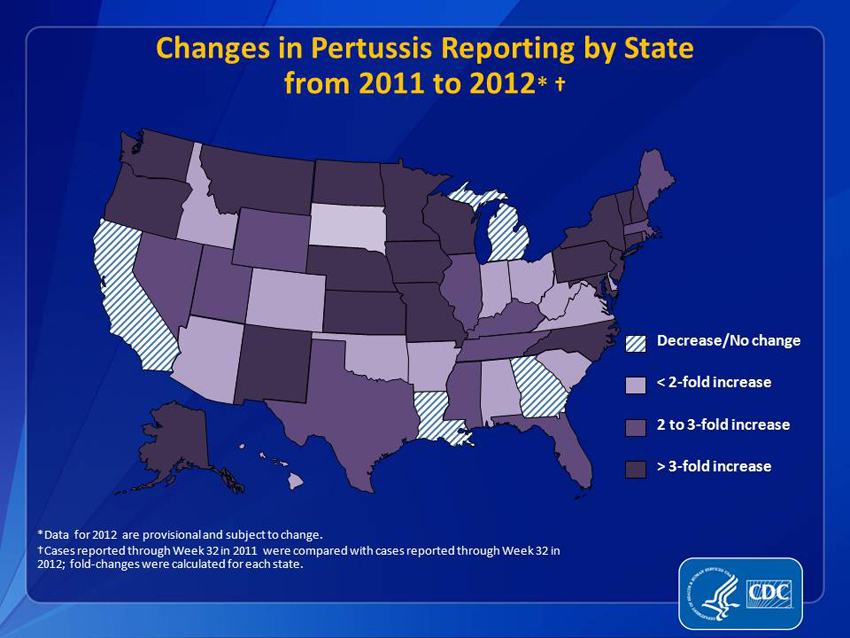 Pertussis, or whooping cough, is on the rise in New Mexico, according to the New Mexico Department of Health (NMDOH.) Anyone can get whooping cough, and in fact, increases in disease are occurring in all age groups. But babies who get pertussis are the group at greatest risk of complications, including pneumonia, seizures, brain damage and death.

Whooping cough is a highly contagious respiratory disease caused by the bacterium Bordetella pertussis. It is known for uncontrollable, violent coughing, which often makes it hard to breathe.

After fits of many coughs, someone with pertussis often needs to take deep breathes, which result in a “whooping” sound. Whooping cough most commonly affects infants and young children and can be fatal, especially in babies less than one year of age.

The NMDOH says the best way to protect against pertussis is immunization.

Whooping cough is an endemic disease in the United States, with peaks in disease every three to five years and frequent outbreaks, according to the CDC. In 2010, 27,550 cases of whooping cough were reported nationwide — and many more cases go unreported.

Whooping cough outbreaks can be difficult to identify and manage. Other respiratory pathogens often cause clinical symptoms similar to whooping cough, and co-circulation with other pathogens (bacterial and viral) does occur.

In order to respond appropriately (e.g., provide appropriate antibiotic prophylaxis), it is important to confirm that Bordetella pertussis is circulating in the outbreak setting and to determine whether other pathogens are contributing to the outbreak.

Polymerase chain reaction (PCR) tests vary in specificity, so obtaining culture confirmation of whooping cough for at least one suspicious case is recommended any time there is suspicion of a whooping cough outbreak.

Pseudo outbreaks of whooping cough have resulted because of false positive test results with PCR. This underscores the importance of recognizing clinical signs and symptoms and practicing careful laboratory testing.

Institutional outbreaks of whooping cough are common. Outbreaks at middle and high schools can occur as protection from childhood vaccines fades. In school outbreaks, prophylaxis is recommended for close classroom and team contacts — and the whooping cough booster vaccine (Tdap) depending on age, says the CDC, adding that whooping cough outbreaks in hospitals and other clinical settings can put infants and other patients at risk.

What is Whooping cough?

Whooping cough or pertussis, is a disease of the nose and throat caused by the bacterium Bordetella pertussis.

What are the symptoms of pertussis infection?

Symptoms usually appear 4 to 21 days after exposure to someone with the illness. The symptoms of pertussis usually occur in 3 stages.

Will everyone with pertussis have all of those symptoms?

You can have pertussis with only a prolonged cough, for example two weeks or longer, without coughing spasms or whooping or vomiting.

How is pertussis spread?

The bacterium that causes pertussis is found in the nose and throat of infected people. These bacteria spread through the air in droplets produced when an infected person sneezes and/or coughs. Persons in the early stage of illness are the most contagious.

How long are people contagious?

After 5 days of the proper antibiotics, people are no longer contagious. If a person does not take antibiotics, s/he is contagious for 21 days after the onset of the coughing spasms.

Pertussis can occur at any age, but vaccination lowers the risk.

What treatment is available for people with pertussis?

Antibiotics will shorten the length of time the person is contagious. If started in the early stage of the disease, antibiotics may make the illness less severe. However, even with the antibiotics, people may cough for many weeks.

Do infected people need to be kept home from school, work or daycare?

Persons sick with pertussis should be kept home until they have been treated with antibiotics for at least five days and are well enough to return to school, work or daycare.

How can I protect myself and my family from getting pertussis?