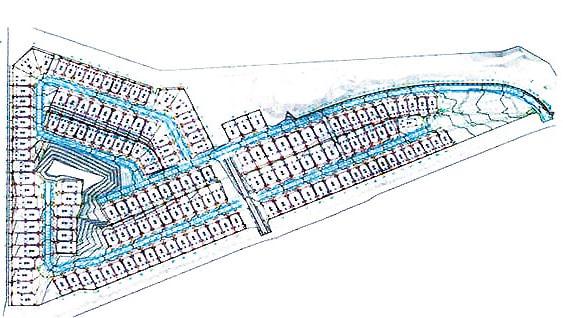 A concept plan of Mirador housing development in White Rock. Courtesy image
By KIRSTEN LASKEY
Los Alamos Daily Post
kirsten@ladailypost.com
After years of discussion and planning, construction is underway for a housing development on property on the north side of N.M. 4, west of the Visitor Center in White Rock.
Earth work and shooting to remove the basalt rock in the property, originally known as A-19 but now called Mirador, began in June.
Adam Thornton of Site A-19-A-1 Acquisition Group LLC, the company developing the property, said the timeline for the basalt removal is six months but not anticipated to take that long. The shots are done twice a week and Thornton said 24-hour notice is given to the County, Los Alamos Fire Department and White Rock Visitor Center. Residents living in the same area where the blasting occurs were given a “pre-shot survey.”
The contractor doing the work is Wesco, a company based out of Utah.
The County also has been involved in the project. Planning Manager Tamara Baer said the Planning and Zoning Commission approved the development’s preliminary drawings in April. Once homes are ready to be constructed, individual building permits for each house will need to be submitted for approval. Additionally, a plat or plot of land will need to be recorded.
Thornton said the goal is to install the infrastructure by the end of the summer or early fall. Ultimately, the hope is to have the development finished in a year.
“They’re hoping to build actual homes before the end of the year,” Baer said.
The completion date is subject to vary with factors such as weather determining if finishing the project in a year is possible.
“It just depends on the winter (we have),” Thornton said, adding that a cold, wet winter will make certain tasks such as laying concrete impossible.
Mirador covers 48 acres and will feature 161 single family homes. There is a tract of land reserved for retail, but Baer said the tract does not need to have retail on it. Homebuyers can choose between one or two-story homes with one, two or three car garages. However, details such as home prices are not yet known. Thornton said that will not be known until the status of the project’s public improvement district (PID) is determined.
The PID gives the development the option to create a levy on the land that will help offset the cost of the development, he said. Having the PID will help keep home prices down.
“We tried to push the cost down as much as possible,” Thornton said.

Work on the housing development started back in 2014. The land came into the County’s possession through a land transfer deal in 2002 with the Department of Energy. Creating new housing development was the recommendation of the White Rock Master Plan Implementation Committee and the process to look for developers for the site began in 2013.

Thornton, a former Los Alamos resident, said he feels this housing development will be good for the community. He explained that his family moved to Los Alamos in 1978 and he graduated from Los Alamos High School. He added that the opportunity to bring houses to Los Alamos has been his longtime dream.
“I’m from Los Alamos and the idea to bring homes to Los Alamos County was always something I wanted to do,” Thornton said. “I love Los Alamos … it’s got a special place in my heart and this project is a labor of love for me.”
Los Alamos
54°
Fair
7:01am6:47pm MDT
Feels like: 52°F
Wind: 6mph WSW
Humidity: 28%
Pressure: 30.41"Hg
UV index: 0
ThuFriSat
72/48°F
73/52°F
73/46°F
Weather forecast Los Alamos, New Mexico ▸
Previous
Next