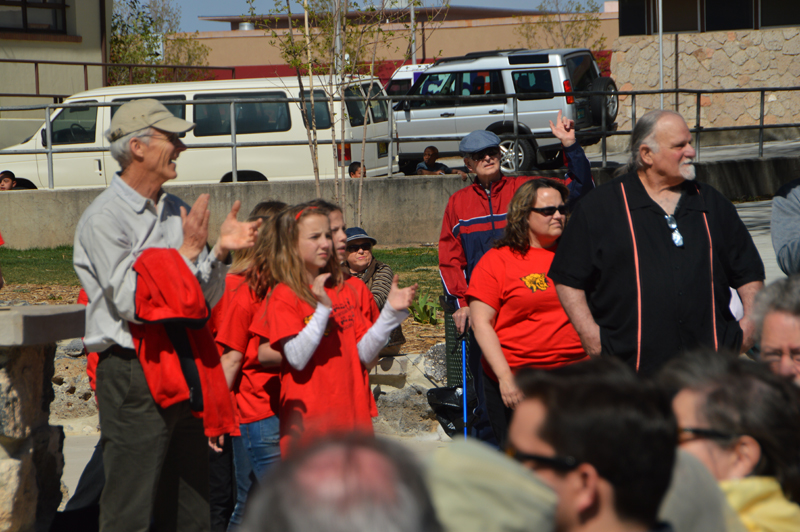 DPU Deputy Manager for Finance and Administration Bob Westervelt draws calculations on a white board in the DPU conference room during a meeting Thursday. Photo by Carol A. Clark/ladailypost.com 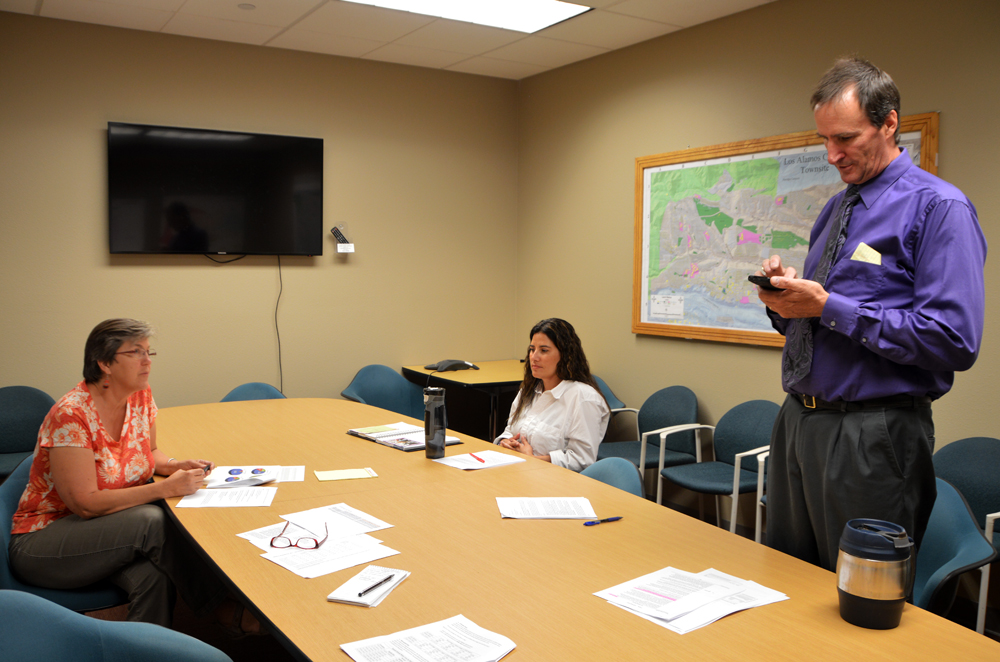 For decades the water rates in Los Alamos and White Rock have been the same whether a household uses 100 gallons or 10,000 gallons per month. The Los Alamos County Council is holding a public hearing Tuesday evening to consider a new rate structure to fairly allocate costs for water use. A 6 percent revenue increase is budgeted for the water distribution system as a whole, but the intent of the tiered rate structure is to fairly tie revenues to costs.

Deputy Utilities Manager for Finance and Administration Bob Westervelt will present to Council a proposed three tier water rate system for the summer months when usage spikes. He and Business Operations Manager Karen Kendall and DPU Conservation Officer Christine Chavez sat down with the Los Alamos Daily Post Thursday to discuss the proposed tiered water rate system and what it will mean to local customers.

The proposed tiered water rate structure is not intended to be punitive or to discourage gardening, lawns or other landscaping, Westervelt said. The tiered system would simply charge heavy users more during the summer months because they place a greater cost burden on the system – causing more pump usage, additional infrastructure, etc.

The DPU officials explained that water consumption in Los Alamos more than doubles during the summer months with the majority of the increased use attributable to outdoor watering.

This increased demand requires additional costs for pumping and delivering water and puts additional wear and tear on infrastructure, accelerating the need for replacement. Proposed ordinance 02-242, which Council will hear Tuesday, attempts to more closely align commodity charges with the cost of providing water. It will allocate the additional costs associated with higher consumption to the peak water use instead of socializing those costs among all water users. “This tiered rate system is not designed to change behavior – it’s designed to cover costs,” Kendall said.

Kendall pointed out that the difference between the first tier rate and the third tier rate is only a modest $1.32 per 1,000 gallons used. Santa Fe, for example, has implemented a tiered rate clearly designed to curtail water use. The difference between the first tier and the top tier in Santa Fe is $15.66 per 1,000 gallons used, and that break point is at the 10,000 gallon level, compared to the 15,000 gallon level proposed here, she said.

Some members of the public have expressed concern with a tiered water rate system.

“I think in part the issue is that many people are afraid of the term,” Westervelt said. “Some think it’s designed to discourage large families, but it’s purely a mechanism to assign the rate to the higher usage customers. We’ve found that 21 percent of the households in Los Alamos County are using nearly 56 percent of the water.”

Westervelt explained that it would be impractical for the DPU to determine usage by household size.

“There is no way we could get 98 percent of residents in Los Alamos to tell us how many people they have living in their household … and if they did then how would we monitor it … would people report to us when their child goes off to college or other household changes occur,” Westervelt said.

“We’ve put a lot of effort over the last months into analyzing the data, which actually indicate larger families will not be negatively impacted by the tiered structure.” Chavez said. “If people just took the time to understand where they would fall in the tier rate, there would be a lot less opposition. If this rate is not implemented, those households with modest or no lawns who are using less water will pay for the households using high volumes of water for expansive lawns and gardens.”

DPU staff evaluated when water consumption spikes and it’s not from large families but rather from households with large lawns and gardens, Westervelt said, adding that it boils down to a lifestyle choice. Those who choose to live in homes with low irrigation requirements will pay less and those who enjoy expansive lawns and large gardens will pay more.

“This tiered rate system was very carefully established so most households could service all of their domestic water needs in the first tier. The second tier also was carefully established to accommodate a modest sized lawn or garden,” Westervelt said. “Only those households that choose to have large expansive lawns and gardens would fall into the third tier. It’s important to note, however, that even the huge water user will only pay a modest amount more per year under the tiered rate system. Note in the examples provided that one of the largest peak season water users only sees an increase of approximately $180 per year, as an example.

Chavez commented that an important fact many people don’t seem to understand is that the water rate is flat all year long and only tiered during the peak summer usage months of May through September.

The tiered water rate system is being implemented in municipalities across the state and country.

“When we apply with the state engineer for grants, one of the questions they ask is whether we have a tired water rate,” Kendall said.

Community members have until 11:55 p.m. today to let the County know how they feel about the seasonal tiered water rate designed to more closely align commodity charges with the cost of providing water. Take the County poll here.

During the Non-Peak season (October through April)

During the peak season (May through September)

DPU staff reviewed the data for the households listed on a letter of opposition presented to Council at its June 27 meeting.

In the letter, 83 signors represented 63 residences. Of those, the following data is significant (using 2013 actual consumption for analysis. Note one residence was new construction thus 2013 usage data was not available).

A similar example of choices & cost:

Peak Season: During peak months from May to the end of September, residential and multi-family customers would be charged on an inclining scale based on the amount of consumption. The first 8,999 gallons consumed would be calculated at a rate of $4.19 per 1,000 gallons. This rate would increase for consumption at 9,000 to 15,000 gallons, and increase again for all consumption over 15,000 gallons.

Should the ordinance be adopted, about 60.5 percent of residential customers would not see a change in their annual commodity cost for water (although the overall bill may be higher due to service fees).

Based on American Water Works Association equivalency standards, the proposed increased monthly service fee is incrementally larger as the meter size increases and applies to all retail customer classes. Similar to the seasonal tiered rate, the increase to the service fee allocates costs associated with infrastructure required to meet water demands of the installed meter. Large commercial and irrigation meters of six inches have 125 times more capacity than a 5/8-inch residential meter. The proposed service fees are as follows:

Household Size: The number of people in a household is not a good indicator of consumption, even if such information was readily available. The DPU Board asked staff to provide examples in both Los Alamos and White Rock of houses with different family sizes and landscaping to show the impact of the flat vs. tier rate structure. Two person households ranged from annual usage of 19,300 to 472,300 gallons.