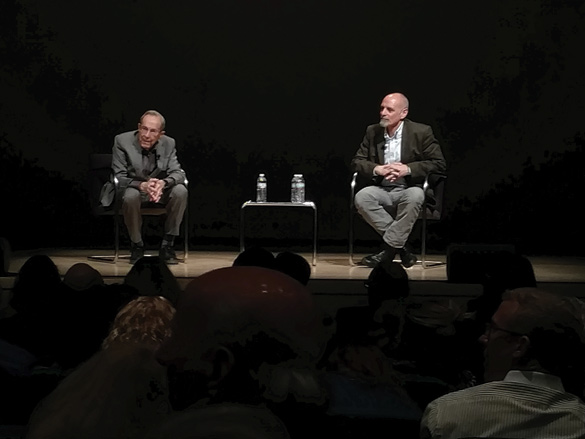 William Perry, left, and Eric Schlosser converse at the Lensic Theater this weekend during the nuclear weapons summit in Santa Fe. Photo by Roger Snodgrass/ladailypost.com 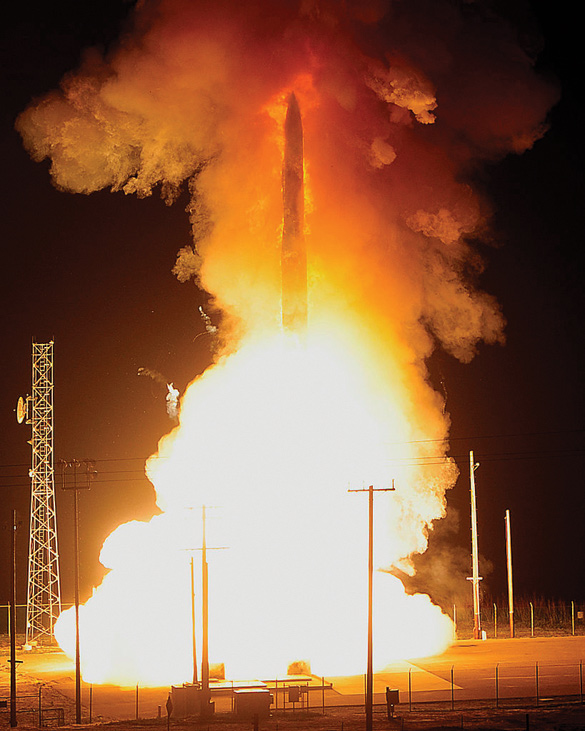 The Minuteman III, the fixed land-based missile of the American nuclear triad, was the obvious loser during several dialogues on nuclear weapons in Santa Fe this weekend. An old standby of the nuclear delivery fleet, the Minuteman was discredited and virtually discarded at the beginning of a four-day Disruptive Futures Conference on nuclear weapons disarmament organized by Creative Santa Fe and during an unrelated symposium on a similar subject, current nuclear weapons policy, by the Santa Fe World Affairs Forum.

The Minuteman III is an intercontinental ballistic missile (ICBM) that carries up to three bombs, each of which can be independently targeted. Its lifespan is coming to an end in a few years and while there are plans to replace it, many experts, including some who spoke this week, believe that the country would be better off without the missiles that are most prone to causing an accidental flashpoint and once launched they can’t be recalled.

Minuteman III missiles are deployed by the Air Force at three U.S. bases – North Dakota, Wyoming and Montana. The Nuclear Weapons Archive reports that a typical Minuteman III, armed with three W-78 thermonuclear bombs, designed by Los Alamos Science Laboratory when it still had its first name, would yield altogether about one megaton of energy, 67 times more powerful than the Hiroshima explosion.

An earlier version of an ICBM, the Titan II, was the unruly missile that exploded in its silo near Damascus, Arkansas in 1980. The incident became the basis of “Command and Control,” a documentary movie that was screened Saturday, a classic illustration of the abiding dangers of carelessness and accidental perils endemic to the nuclear enterprise. The film is based on the acclaimed non-fiction book by the same name and written by historian and journalist Eric Schlosser.

The movie is a tick-tock, problem-solving thriller about a fully armed Titan II missile in a silo in Arkansas, as a crew of very young responders works frantically to repair the damage caused by a dropped socket. Nobody knew what would happen, but a worst-case scenario was a potential nuclear explosion that could have taken out most of Arkansas and blanketed much of the Midwest with radioactive fallout.  The film is about the dead ends and multiple failures encountered as command and control managers wrestled with the ensuing crisis.

Schlosser was on hand after the screening for an interview with Jay Coghlan of Nuclear Watch New Mexico, and then on Sunday Schlosser had a public conversation with former Defense Secretary William Perry before an audience of two or three hundred at the Lensic Theater.

Perry was a technical nuclear advisor to the Pentagon during the Cuban Missile before he became Secretary of Defense in 1994 in the Clinton Administration, when he was deeply involved in safeguarding nuclear materials after the dissolution of the Soviet Union.

Schlosser pointed out that Perry took a stand against land-based missiles several years ago, but also advocated taking them off short-term launch-on-warning alert, that heightens the danger of starting a nuclear war based on a false alarm.

“I was called at 3 in the morning to say that 200 missiles were on the way,” Perry said. “I will never forget that morning.” Luckily, the general who called had already concluded that it was a glitch in his computers.

“I have devoted the rest of my life to educating the public on nuclear dangers and what might be done to lessen those dangers,” Perry said.

On the question of the President being the “one and only” person who can authorize a launch that could very well mean “the end of civilization,” Perry said, “I think it is a very great weakness in our system that could lead to a total catastrophe.”

Perry has been on a speaking tour to publicize his book, ‘My Journey at the Nuclear Brink.” He is also trying to reach a large public audience with his “Massive Open Online Course (MOOC)” an Internet version of a survey he teaches at Stanford on nuclear weapons. He assured his Santa Fe audience, that the course was “not only free but also doesn’t have any quizzes.”

More information on Perry’s educational initiatives can be found at his web site, The W.J. Perry Project, including an excellent animated scenario about an imaginary nuclear terrorist flashpoint, “Dr. Perry’s Nuclear Nightmare.”

Seeking a way to end the conversation on an optimistic note, Schlosser asked Perry, “Could you ever have dreamed the Soviet Union would vanish from the earth that the Berlin Wall would come down and that Eastern Europe would be free without the use of nuclear weapons?”

“I did not believe it would happen in my lifetime and I was amazed and delighted when it did happen in the 1980,” Perry said. “I was thrilled at the opportunity in the 90s to work to try to take advantage of that to try to bring Russia into our security orbit.  I think we partly succeeded at that, but I do think we have slid back in the last years.”

Among the speakers at the world affairs forum on Monday at the Santa Fe Community College James Doyle, a political scientist, and former specialist in non-proliferation at Los Alamos National Laboratory, provided additional arguments to ostracize the land-based Minuteman III, along with a detailed rationale for cutting back on other pieces of the nuclear weapons modernization program currently under discussion in Washington.

He advised against an undercurrent in present plans that tend to undermine strategic stability between opposing forces in favor of refining weapons designed to gain a strategic advantage, or weapons that are more clearly capable of being used in conflict.