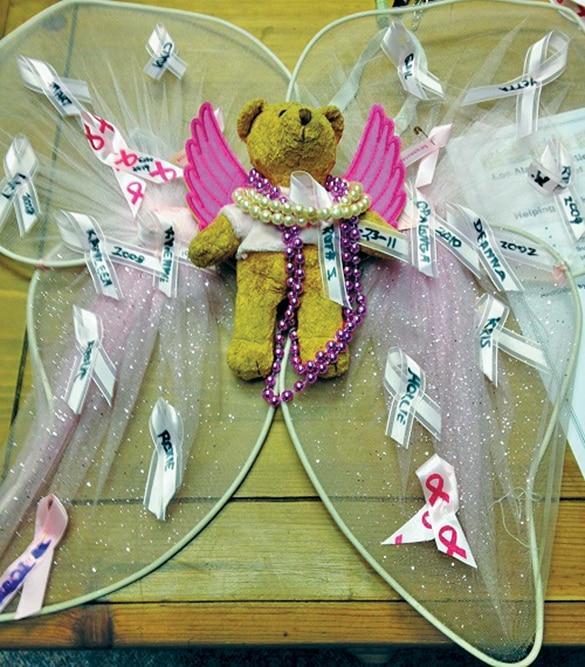 The wings amuse the other breast cancer walkers as they guess whether I’m a butterfly or an angel or a fairy. As far as I’m concerned, I’m whatever they need me to be.

Pink ribbons bearing the names of survivors and those who have been lost are pinned like dust to the fluttering wings while in the center is a small bear wearing a bead necklace. The bear’s name is Ruth. Ruth was my mother-in-law. Her house in Cleveland had rooms filled with elaborate doll houses and meticulous detailed miniatures. Tiny figurines lived in perfect little homes with food on the shelves, art on the walls, and babies in their cribs. Some were Elizabethan, some country settings, others were late American.

In 2009 she developed a rash on her chest. At first, she ignored it because she thought it was caused by a soap or lotion. When it didn’t resolve on its own, she tried over-the-counter topical rash creams. Nothing seemed to help. After six months she decided to seek treatment from her doctor. He also diagnosed it as a rash and prescribed a series of topical rash creams, none of which worked. Months passed as they tried cream after cream, then antihistamines, then steroids. The steroids caused weight gain, the antihistamines contributed to her increasing fatigue.

Ruth’s doctor had a small practice, in the back of an insurance agency office one block from the Cleveland Clinic, one of the top cancer centers in the country. The waiting room had dark 1970s wood paneling and was illuminated by two floor lamps and one frosted window. Three hard plastic chairs and two end tables covered with tattered magazines offered visitors little comfort.

Retired from a long career as an executive, Ruth spent her time scrapbooking and working on her dollhouses. Her pension was small but kept her comfortable in her home, which she inherited from her parents. A handyman helped her with the rosebushes that surrounded the brick and blue clapboard house, and he cleared the driveway of snow in the winter so she could get her car out to drive to her doctor appointments.

A year-and-a-half after the red, dimpled rash appeared on her chest her doctor finally ran the right tests and diagnosed her with stage 3B inflammatory breast cancer (IBC). He had never suspected breast cancer because her mammograms did not show the typical calcification indicative of a tumor.

Inflammatory breast cancer (IBC) is an aggressive and fast growing breast cancer in which cancer cells infiltrate the skin and lymph vessels of the breast. It often produces no distinct tumor or lump that can be felt and isolated within the breast. Early IBC symptoms may include persistent itching and the appearance of a rash or small irritation similar to an insect bite. The breast typically becomes red, swollen and warm. The skin may appear pitted like an orange peel, and nipple changes such as inversion, flattening, or dimpling may occur.

By the time they scheduled chemotherapy, the cancer had spread to her brain and was inoperable. She passed in February 2011. Ruth is one of the reasons why I continue to walk in breast cancer walks raising funds for education, research and treatment. Ruth is just one of the many women I carry on my wings.

About the author: Nancy Partridge is a native of Los Alamos. She learned to walk about a year after being born at Los Alamos Medical Center.

Purchase a $25 raffle ticket at Atomic City Quilts/Warm Hearts Yarn for a full-size pink handmade quilt. The drawing is July 28.