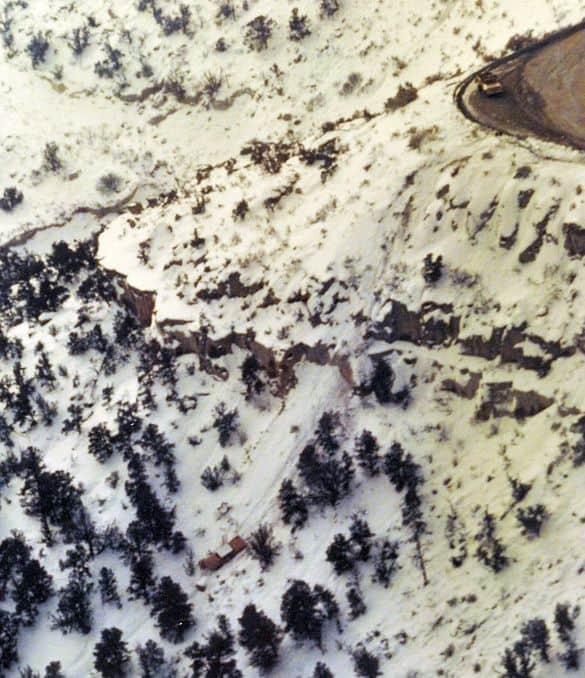 Roger Waterman’s Starchief lies wrecked at the bottom of the cliff below what is today known as Anderson Overlook. Photo courtesy Roger Waterman (See more photos below)

The date was Dec. 30, 1968. Roger Waterman was driving his good friend, Mike Benziger, down the main hill road, heading to Benziger’s home in Santa Fe, after both had been playing basketball in Los Alamos.

Waterman was driving his large and powerful 1959 Pontiac Starchief. He had driven the Starchief 25 times on cross-county trips to and from Dartmouth College in Hanover, N.H., where he was a senior classman.

A powerful storm had dumped two feet of snow on the ground. High snow banks rose up on the rock side of the main hill road and covered the protective guardrail on the left side of the road. The 22-year-old Waterman admits he was driving a bit too fast for the conditions as he approached the Anderson Overlook area of the main hill road. It was icy and there was loose sand on the road.

Waterman’s Starchief fishtailed around the curve as he saw an oncoming car headed his way. He spun the steering wheel left. Waterman had floored the gas pedal, clearing the oncoming car. The car spun and now was facing the cliff. The road was dry near the cliff’s edge. Waterman’s car climbed up onto the guardrail and swung right, now shooting down the center of the guardrail like a monorail train, violently striking several of the posts holding the rails to the ground. The car was tilting side to side as it slid along the guardrail.

At that time, cars typically did not have seatbelts. “Hang on Beez,” Waterman exclaimed. Both friends were thrown to the right side of the car. Waterman was now on top of Benziger, as Waterman struggled to maintain control of the car with his left hand still holding fast to the steering wheel.

“It’s going to be a long ride,” Waterman shouted to Benziger who was known as “Beez” to his friends.

The car finally tilted off the guardrail and rolled over once, crushing the roof down. Both friends were tossed about inside the car. After rolling, the car somehow ended right side up and facing straight down the cliff. The car shot down the cliff face like a toboggan. The front window broke out and snow poured into the car.

The Starchief came to rest 600 feet down the cliff after hitting a large boulder.

Waterman, now mostly under the passenger dash board, had his knee pressed against the accelerator pedal. The back wheels were spinning. Waterman, stunned, pulled his hands up to turn the engine off. He saw Benziger hanging half-way out the now missing back window.

“I killed him,” Waterman said to himself. “Are you ok?”

“Yea,” was Benziger’s reply, although he was still not moving.

Waterman got out of the car, found a tire iron and pried open a side door and pulled his friend out of the wreck. Benziger was bleeding from a bad gash in his forehead and Waterman had a nasty wound on the back of his head and neck that was gushing blood. Waterman quickly found a sweat towel and pressed it against his blood soaked neck.

As luck would have it, a police officer was driving on the dirt road just below the cliff and had seen the car fly off the road. The policeman immediately called for an ambulance.

The two friends managed to make their way through deep snow to the dirt road. By the time they got to the road, an ambulance was waiting. They were immediately taken to the Los Alamos Medical Center.

Both required many stitches for their wounds. Waterman had lost a lot of blood and badly broke his nose. Miraculously, they were both released the next day.

After he returned to Dartmouth College, Waterman had his nose re-broken and straightened in a very painful procedure involving a pair of pliers.

Each time Waterman drives off the hill, he reflects back to the day he and his good friend “Beez” nearly lost their young lives on the main hill road.

Waterman and Benziger are good friends to this very day. Benziger is a pathologist living in Colorado. Benziger and Waterman have travelled together across the globe on numerous occasions, including riding motorcycles in South America together. 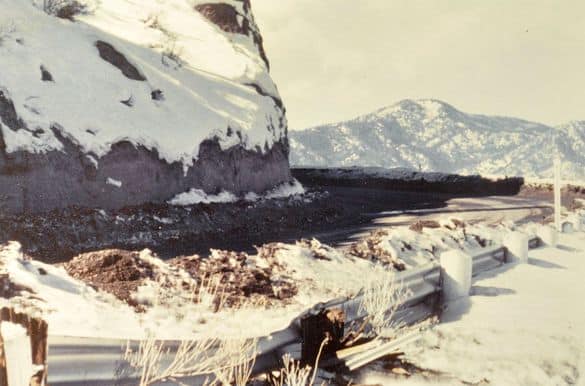 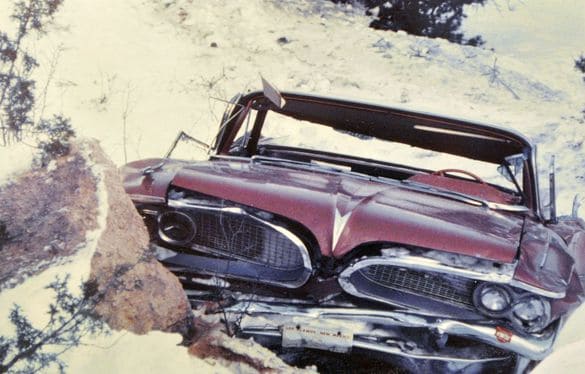 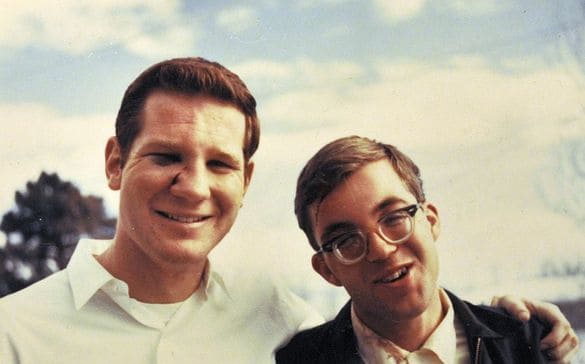 A young Roger Waterman and Mike Benziger survived their deadly crash and are close friends to this day. Photo aourtesy Roger Waterman 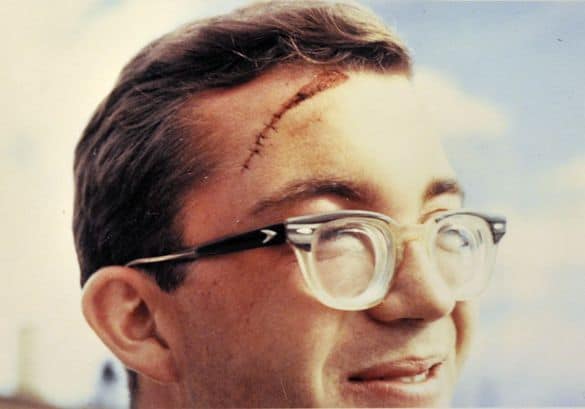 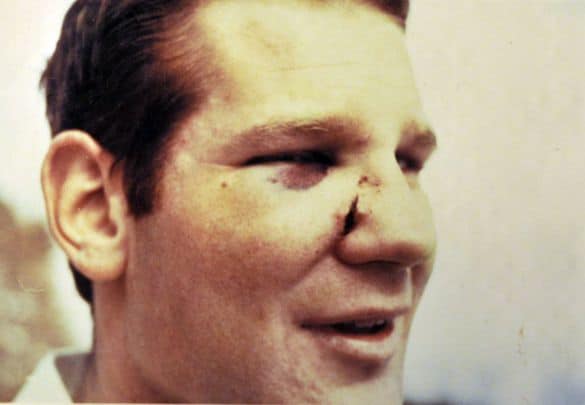 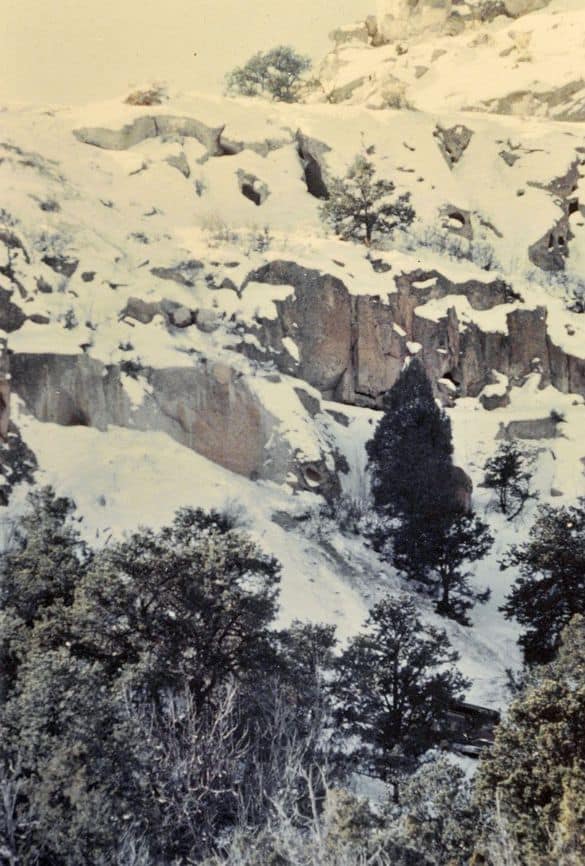 The cliff that nearly took the lives of the two young men. Photo courtesy Roger Waterman