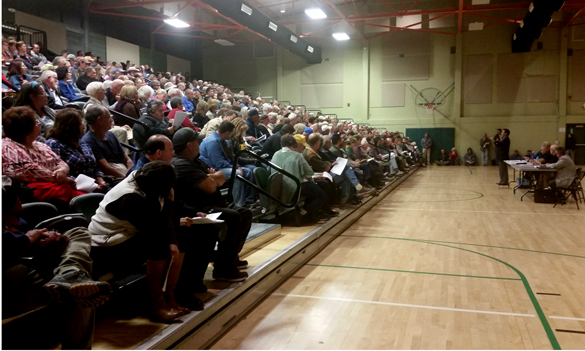 The Aamodt Settlement, which was originally filed in Federal Court in 1966 to settle all water claims in the Nambe-Pojoaque-Tesuque Basin (NPT Basin) for both pueblo and non-pueblo people, is now nearing a final conclusion and local residents attended Monday’s meeting to hear updates on the process and to voice concerns.

Through the process of the litigation, the Court determination was that the Historical Beneficial Use of water for the Pueblo of Nambe, Pueblo of Pojoaque, Pueblo of Tesuque and Pueblo of San Ildefonso to be 3,660 acre feet per year (afy). There are 325,850 gallons of water in an acre foot. These rights were settled when the federal judge entered the Partial Final Decree March 23, 2016, thus adjudicating the 3,660 afy of water to the four Pueblos.

This Partial Final Decree also triggered a provision in the Settlement Agreement, which closed the basin to any new appropriations. After the March 23 decision, a non-pueblo entity or property owner cannot obtain a well permit from the State Engineers office without purchasing a water right from within the basin.

The Federal Court required the State Engineers office to determine every non-pueblo owners claim to use of water in the basin and adjudicate that claim. By adjudicating a claim in effect meant the State Engineers office, on behalf of the state would file a lawsuit against each non-pueblo water claimant to settle his or her claim to water in the NPT Basin. All surface water rights were determined and adjudicated in the 1980’s. Most of the current claims have to deal with ground water (wells).

In 2006, the “Settling Parties”, which included the Pueblo of Pojoaque, Pueblos of Nambe, Pueblo of San Ildefonso, Pueblo of Tesuque, US Government, State Engineers Office on behalf of the State of New Mexico, Santa Fe County, and the City of Santa Fe along with Bill Richardson signed the “Settlement Agreement” and sent it to Congress.

In 2010, the “Aamodt Litigation Settlement Act” passed Congress, which also created a Regional Water System and also purchased an addition 2,500 afy for the four pueblos to be imported into the NPT Basin. This water would be diverted from the Rio Grande. The system would have a capacity of 4,000 afy, with 1,500 afy capacity for non-pueblo people. Santa Fe County would acquire some of their right from the transfers from areas in northern New Mexico. The other rights are anticipated to come from non-pueblo residents electing to give up their wells, transfer their right to the Santa Fe County and have a water bill from the Regional Water System.

The Rules and Regulations of how water will be administered in the basin accordingly to the Settlement Agreement. These Rules and Regulations are being promulgated by the State Engineers office and will come up for public comment in early 2017. In all options available to water right owners, these rules will apply to all water rights in the basin. “Many non-pueblo water right owners are concerned that they will have to make a choice with their water rights without knowing the rules they will have to play under”, Trujillo said. “Water is life, they have every right to be concerned, this is why I’m working extremely hard to bring transparency to this Settlement Agreement.”

The Joint Powers Agreement (JPA) which is an agreement between the  five Parties, Pueblo of Pojoaque, Pueblo of Nambe, Pueblos of San Ildefonso, Pueblo of Tesuque and Santa Fe County. The JPA will create a Regional Water Authority (RWA) which will be a legal entity task with diversion, treatment, and delivery of water to the NPT Basin for domestic, irrigation, and commercial water. The RWA will also have the authority to own, operate, construct, manage, operate, bill and collect, incur debt, and establish policies and enforcement mechanisms for delivery and use of water.

In the proposed JPA up for consideration Nov. 29, the RWA will be composed of seven board directors. One director appointed from each of the four pueblos and one from Santa Fe County Board of Commissioners (the Parties Directors). It is of great concern in that under the JPA draft currently being considered, the remaining two directors are to be selected by majority vote of the Parties Directors.  Note: 2010 US census data shows that 86 percent non-pueblo people and 16 percent pueblo people live in the NPT Basin.

“There is currently great reluctance among the 84 percent of residents in the NTP basin to become customers of the RWS because of the lack of neutral representation on the Board,” Trujillo said. “If a Regional Water System is going to be built, it needs to be viable and successful not only initially, but for generations to come.”

Over the past twos, Trujillo has held several town hall meeting on the Aamodt Settlement Agreement to help inform water right owner on this complicated water settlement. Trujillo explained that the process is in the closing months and every water claimant will have to make a choice in the very near future. Trujillo said his goal in holding these meetings is to inform and help shape the remaining components to be as fair as possible.