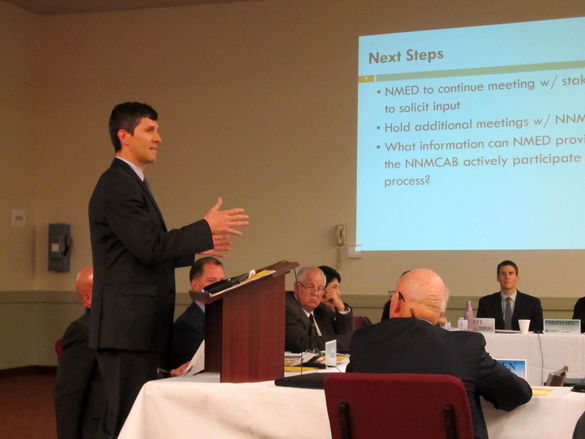 New Mexico Environment Department Cabinet Secretary Ryan Flynn asks for input on a revised consent order from members of the Northern New Mexico Citizens Advisory Board Thursday at the Cities of Gold Conference Center in Pojoaque. Photo by Roger Snodgrass/ladailypost.com 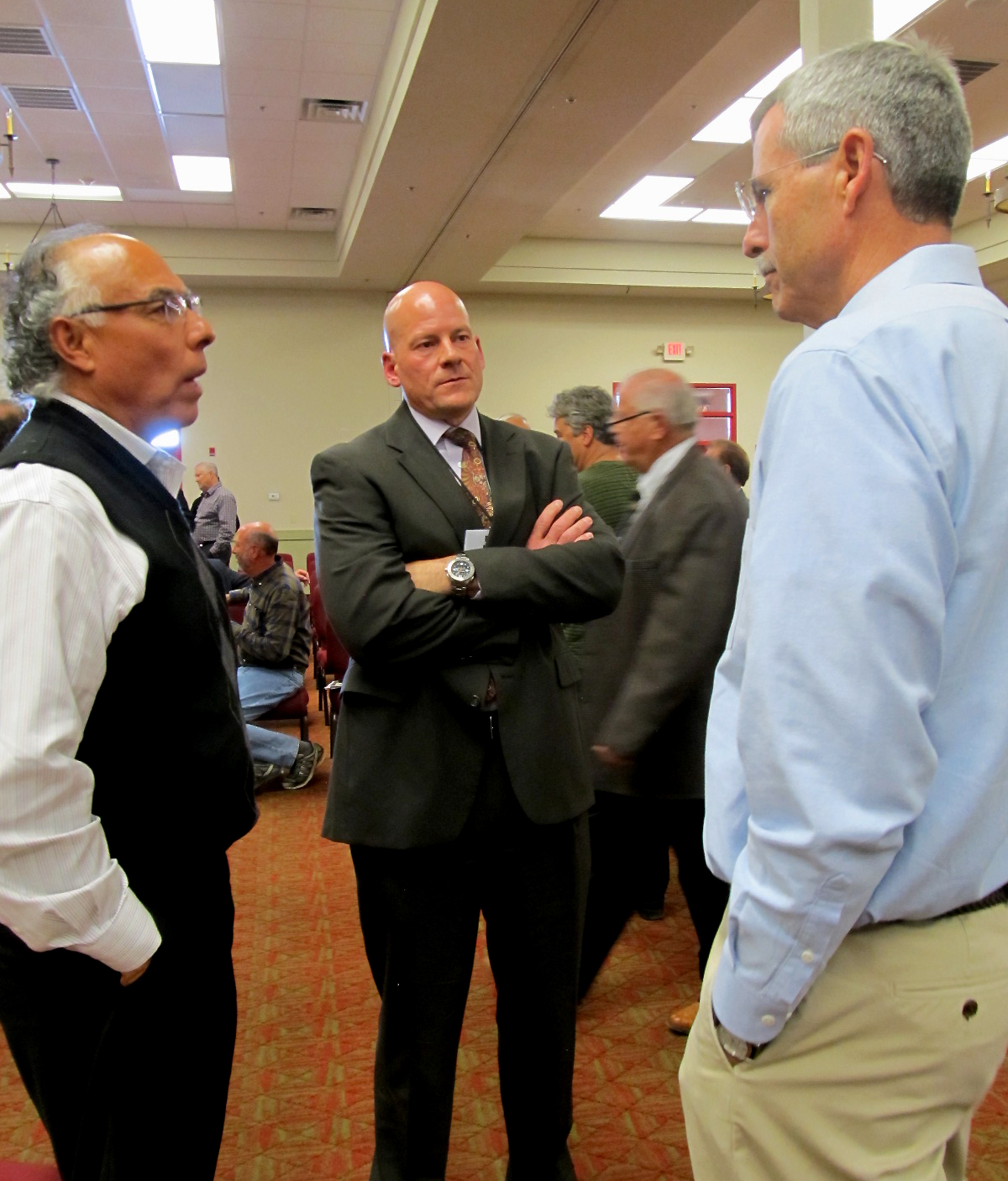 POJOAQUE – A citizen’s advisory board heard a rough outline for a revised plan for cleaning up radioactive and hazardous waste from many decades of nuclear operations at Los Alamos National Laboratory.

State and federal environmental officials are proposing more emphasis on actual cleanup – “boots on the ground,” as one board member paraphrased it – rather than bureaucratic milestones and deliverables.

While waiting to finish negotiations on a settlement agreement related to a nuclear incident at the Waste Isolation Pilot Project in southern New Mexico in February 2014, the Department of Energy and the New Mexico Environment Department are beginning to sound out environmental stakeholderson ways to improve the lagging cleanup program at the laboratory.

A formal consent order signed bythe government entities and laboratory managershas guided cleanup since 2005, but it runs out of time next month, well short of finishing the full scope of work. Technically, the consent order remains in effect until the parties sign a new one.

NMED Cabinet Secretary Ryan Flynn said the consent order covered a lot of concerns at the time but did not anticipate unknowns like the hazardous chromium in the Los Alamos aquifer that did not fully come to light until later the next year. Flynn said the estimated cost of the remaining work of the laboratory under the current DOE estimate is $1.2 billion.

“I believe that is far too low,” he said, because the program has not gone through the process of deciding what the remedies will be for many of the remaining problems.”

This year’s budget is $189 million, but Flynn believes future requests have to be more like $255 million. He said the funding level is important because it determines the how much work can be done each year and therefore how long the job is going to take.“We recognize and agree there needs to be a new schedule,” he added. “We also agree with DOE that there are ways to improve this process.”

Doug Hintze, the new manager of the Department of Energy’s Environmental Management field office in Los Alamos expressed a somewhat different perspective on budget matters, and he placed more emphasis on getting to the end of the project. He arrives at Los Alamos with an extensive background as a senior manager at the Savannah River Site.

“We have stuff in the ground that we all agree should be gotten rid of,” he said. “What do we do and what time does it take in order to get rid of it?” His priorities, he said, were safety, transparency and efficiency.

“Whatever funding we get, we need to be good stewards,” he added. “We celebrate when we get the last thing done.”

On the question of budgets and funding, Hintze said there was a revised baseline at DOE headquarters in Washington, awaiting review and approval. He said he’d like to see $300-$400 million, but considering current funding levels, “It will do no good to develop a consent order based on commitments of $300 million.” The President makes requests, but Congress sets the levels. “EM has $7.5-$8 billion in commitments each year and gets about $6 billion,” he said.

Hintze’s presentation included some specific information about what the proposed approach means by organizing the cleanup around the concept of “campaigns.” Among the multiple tasks yet to be accomplished, NMED had asked the EM managers group them logically, geographically and economically into a set of “major scopes of work,” each of which would be considered a campaign.

Without establishing a priority and with only a crude cost estimate at this point, Hintze identified 14 campaigns in all. For example, there is a two-part chromium project that would take 3-5 years and cost about $200 million.

Another example, a big one, would be the closure of Area G, the main disposal site for radioactive material, along with two other smaller disposal areas. Area G was supposed to be the final piece of the current consent order, but while trying to remove all the transuranic waste stored at Area G, a LANL canister that came from thereerupted in the underground WIPP site, halting that campaign. Hintze priced the finishing work there at $225 million with an estimated duration of 6-8 years. But that also assumed a controversial closure strategy involving an engineered cover and a long-term maintenance program.

Hintze stressed the uncertainties related to the cost, because each campaign had to be folded into the overall project. “You can’t do all 14 at the same time,” he said.

Comments by nuclear watchdogs at the meeting included criticism by Joni Arends of Concerned Citizens for Nuclear Safety about the state’s reduced commitment to public participation, including the advisory  board meeting, which was not a fully advertised public meeting held in the evening when working people could attend.

She noted that a recent environmental assessment meeting on the chromium contamination was also not a real public meeting and was not fully advertised. She said that there were enough uncertainties and concerns about the Chromium work plan that it should be subject to a full environmental impact statement.

Scott Kovak of Nuclear Watch New Mexico said he would reserve his judgement until there were more concrete details about the nature of the campaigns, but that he didn’t see what was wrong with having deadlines and deliverables. Why, when problems and surprises came up, did the managers not revise the schedules, he wondered. “There is no reason that schedules could not have been updated along the way,” he said.

After meeting with the Northern New Mexico Citizens Advisory Board Thursday, Flynn and Hintze were scheduled to talk Friday to the Regional Coalition of LANL Communities in Hernandez.