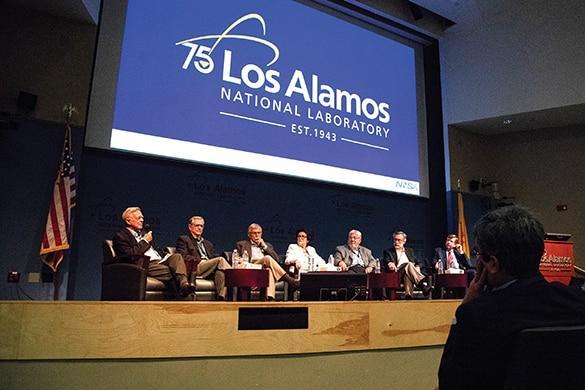 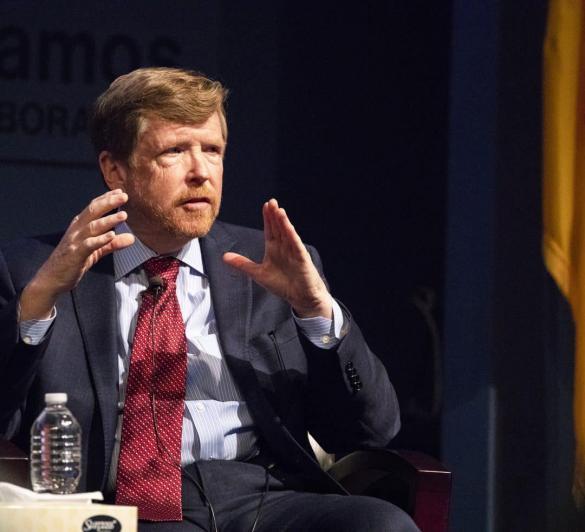 LANL Director Terry Wallace recalls his best memories of LANL including the 1960s and 70s when he was growing up in the Los Alamos community. Courtesy/LANL

“Is this the coolest thing ever?”, Los Alamos National Laboratory Executive Director Carolyn Zerkle asked Tuesday morning as six of 11 LANL directors who served at the Lab since its inception in 1943 sat on stage for “Directors’ Panel: 75 Years of Solving National Security” in the crowded Pete V. Domenici Auditorium in the National Security Sciences Building:

Current LANL Director Terry Wallace said the Lab has a rich history expressed by the former directors on stage and as he introduced each one, he referred to the different challenges they faced during their terms. He said today’s challenges don’t look like those faced in 1943 by J. Robert Oppenheimer, 1945 by Norris E. Bradbury or in 1970 by Harold M. Agnew but that they are just as compelling and continue to be framed by world events.

Wallace said in 1979 when Donald M. Kerr took over, he faced new challenges including an administration that was going to promote missile defense and the rise of Islamic terrorism. Prior to assuming the role of director, Kerr conducted and led Los Alamos’ research in high-altitude weapons effects, nuclear test detection and analysis, weapons diagnostics, ionospheric physics and alternative energy programs.

In the 90s, Wallace mentioned that when John Browne took the reins, the collapse of the Soviet Union had occurred and the United States had no clear adversary. Indian and Pakistan were conducting testing and Vladimir Putin was first elected. Browne first joined LANL in 1979 after spending almost a decade at Lawrence Livermore National Laboratory as a research scientist. At LANL, he held a series of technical leadership positions including Physics Division leader, associate director for Experimental Physics, associate director for Research, associate director for Defense Research and Applications, associate director for Computational and Informational Science and director of the Los Alamos Neutron Science Center.

Wallace said when Robert Kuckuck became director in 2005, the Lab was an autonomous unit but there was a move to integrate the national labs within the National Nuclear Security Administration complex and North Korea was firing short-range missiles over the Sea of Japan. He was former deputy director of LLNL and had spent his early career there developing instrumentation and measuring techniques for diagnosing underground nuclear explosions. He also served as the first principal deputy administrator of the NNSA when it was created in 2001.

By 2006 when Michael Anastasio moved to the LANL director’s position he became the only person to have also held the position of LLNL director. North Korea had conducted its first nuclear test and there was a huge oil well blow out in California. While he was LANL director world events included the signing of the new Strategic Arms Reduction Treaty and the death of Osama Bin Laden, Wallace said. Anastasio had earlier served as scientific advisor at the Department of Energy and provided scientific advice to senior members of the government on various national security issues. During his tenure at LANL, he was instrumental in developing and implementing the national stockpile stewardship program.

Wallace said his predecessor Charles McMillan took over in 2011 in the era of the rise of the great powers, when there was focus on the Arab Spring and the rise of the individual in espionage, which became vanity-driven as in the case of Eric Snowden. He noted LANL’s work during that timeframe on the Ebola and Zika viruses as well as systems that provide substantial improvements in data gathering for subcritical nuclear tests. Before joining LANL, McMillan was an experimental physicist at LLNL. Prior to becoming the LANL director, he was the principal associate director for the Lab’s Weapons Program.

Panel moderator for the event Ellen Tauscher, former seven-term member of Congress, who currently serves on the University of California Board of Regents and as chair of the Board of Governors for Los Alamos National Security, LLC and Lawrence Livermore National Security, LLC. She wished LANL a “Happy 75th” and said she was happy to be a part of the “governance part of the family” noting that she had known many of the directors on stage for more than 20 years. She went on to ask each of them to share their “best memories” of LANL.

Kerr said what stuck in his memory most was the 40th anniversary of the Lab in 1983 and how out of eight people who had won the Nobel Prize, seven of them had come back to discuss the state of their disciplines and the outlook for the future.

Browne recalled that he had been on the job for three months when he received a call on a Thursday telling him President Bill Clinton wanted to visit the Lab on the following Tuesday. He also recalled the first Los Alamos Medal being awarded to Harold Agnew and Hans Bethe. Browne said he would never forget the Cerro Grande Fire and the response of the Lab, the community, the state and the federal government resulting in no loss of life. He noted that the Lab “lost nothing major” and “came back on in two weeks”.

Kuckuck said he was the only director who knew when he would leave when he came on board in 2005. He said there was palpable angst at LANL about the new employer coming in and in his first month five very senior people told him they were leaving. He said retirement notices doubled and he realized the need to preserve the Lab’s most valuable asset – its people.  He said his best memory was that he was invited to dinner at the homes of several employees and experienced a welcoming that was remarkable.

Anastasio said his biggest memory also was about the people. He said when he arrived he had a feeling about the Lab that it had been “beaten up publicly” and had gone through a difficult time enduring undue criticism. He noted that people at the Lab were rightfully proud of their work and went on to prove to everyone on the outside what a great institution it is. He listed national security challenges being faced at that time including North Korea, the START Treaty and Iran and noted that all three continue to exist today.

McMillan recalled the view from his office across the Lab where he could see creativity and innovation coming to fruition. He said he too had memories of a fire. He recalled the broad scientific progress made with the Mars Rover project, which provided more data in two years than had ever been collected from the planet.

Wallace recalled growing up in Los Alamos in the 1960s and 70s and that by the time he graduated from Los Alamos High School, there had only been three directors; Oppenheimer, Bradbury and Agnew. He said when Agnew became director in 1970, it was a big change because he was perceived as the first “real” director. He said Los Alamos was an odd community at that time and students were tested on “everything”. He recalled his competency tests in seventh grade and how he had listed LANL director as his ideal career.

Wallace also recalled being at the Nevada Test Site in 1975-76 working on instrumentation and feeling the tremendous rumblings in the desert. He said he remembered thinking that he actually knew the people who put it all together and that they had the same spirit back then as exists at the Lab today – doing stuff that nobody else can do. He recalled his work with Global Security noting that he had witnessed with pride advances by colleagues that changed the world but that nobody else would ever know.

Tauscher asked other questions of the panel pertaining to nuclear testing and accepted some questions from the audience. Expressing what was a common theme from the directors, Anastasio noted that following 9-11 it became apparent that there was a whole raft of people who wanted to work for the labs that had never thought of it before. He said one of the most important jobs lab directors have is to be ready to face challenges 10 years out when they don’t even know what they really are. He said he remembered the labs organizing themselves around issues of proliferation before 9-11 happened and that they were able to hit the ground running.

Wallace said the Lab’s “big science” is that it brings multi-disciplines together and that the product of that is the confidence that a vast pool of talent can actually solve difficult problems.

In response to a question on their fears for the future, the directors mentioned hybrid warfare, defending the country’s way of life, where artificial intelligence will be and the mass illiteracy in the country.

Wallace said later in the day that Tuesday’s event was a celebration of the rich history of Los Alamos.

“Only 11 directors have spanned the Laboratory’s 75 years of serving the nation. The six directors here yesterday led the Laboratory during a unique moment in history. To hear their perspectives about how that history influenced the Laboratory and their leadership was enlightening,” he said. “It’s a good reminder of the great diversity of work that the Laboratory has done over the last 75 years—and the continuing need for our scientific and technological expertise to address emerging threats to national security.” 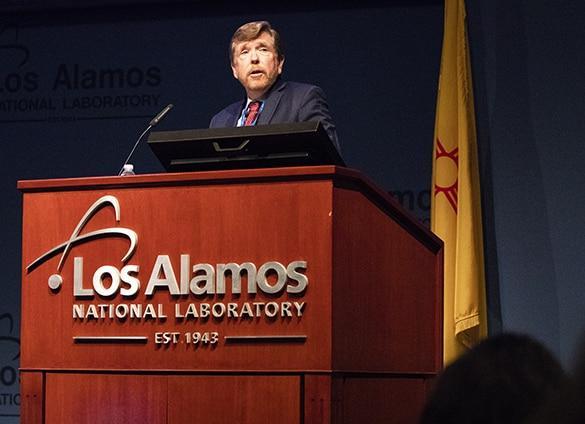 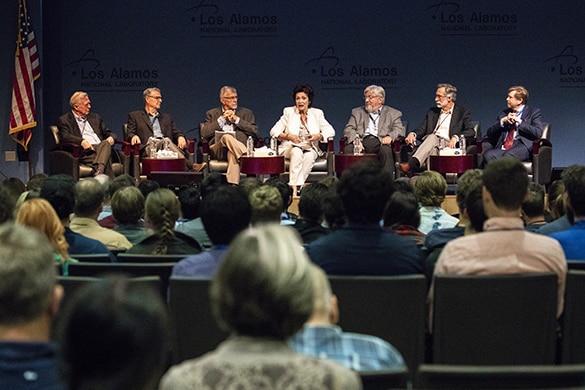 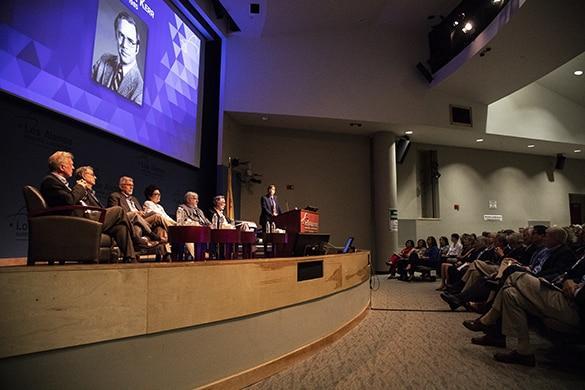