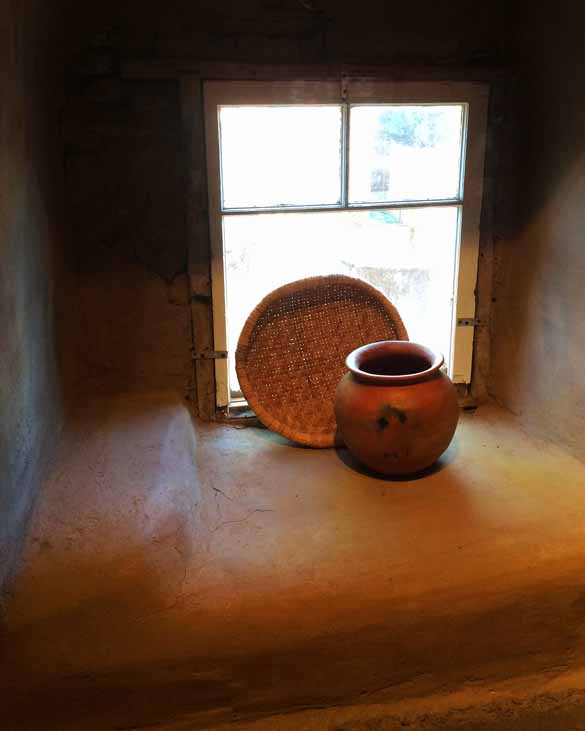 This deep windowsill is in the ‘Oldest House’ circa 1646, in the Barrio De Analco Historic District at 215 East De Vargas Street in Santa Fe. Photo by Leah Austin

The National Historic Landmark Barrio de Analco Historic District in Santa Fe is one of the oldest residential neighborhoods of European origin in the United States.

Originally settled in 1620 by the Spanish, Barrio (or District) de Analco suffered major destruction during the 1680 Great Pueblo Revolt. The Spanish rebuilt Analco beginning in 1692 during their recolonization of New Mexico.

The buildings of Analco are in the Spanish Pueblo and Territorial styles that reflect the merger of Spanish, Indian, and eventually American building techniques. In the seven adobe brick buildings that make up the Barrio de Analco Historic District visitors can see how working-class Spanish colonists, Tlascalan Indians, and other American Indians lived in Santa Fe during the late 17th and early 18th centuries.

The Spanish first settled Santa Fe during the winter of 1609-1610 as they sought to “civilize” the North American continent and to expand their New World empire. Mirroring other Spanish colonial settlements of the era, the colony in Santa Fe was a defensible fort and village set around a central plaza. Also featured in this itinerary, the Santa Fe Plaza became the commercial, social, and political center of the community. Fearing attacks from the local Pueblo Indians, many high-ranking Spanish officials and citizens built their homes around the plaza because it was a central defendable area.

As Santa Fe prospered, the original settlement expanded to include growing neighborhoods on the opposite side of the Santa Fe River from the plaza. By 1620, the newly constructed Chapel of San Miguel was in place and a suburb, the Barrio de Analco, began to grow. The Tlascalan Indian word, “Analco,” means “the other side of the river,” which distinguished this barrio from the neighborhood on the plaza side of the Santa Fe River where government officials and other prominent citizens resided and attended mass.

The Chapel of San Miguel provided laborers, artisans, and Tlascalan Indian servants with a place to worship in the growing suburb.

Analco and Santa Fe suddenly stopped growing when the Great Pueblo Revolt of 1680 erupted. After years of enduring Spain’s encomienda system of forced labor and the insistence of Catholic conversion, the Puebloan Indians revolted against Spanish rule. During the revolt, Analco was the first Santa Fe neighborhood the Puebloan Indians destroyed, including partially burning down the Chapel of San Miguel.

The Spanish colonists and most of their Tlascalan Indian servants fled from Santa Fe to El Paso. The Puebloan Indians held Santa Fe for 12 years. In 1692, led by Diego de Vargas, the Spanish returned to re-occupy Santa Fe, and Vargas made peace with the Puebloan Indians. After regaining control, the Spanish began rebuilding Santa Fe and the Barrio de Analco

Analco’s one-story Spanish Pueblo homes were constructed using adobe bricks. Before the Spanish introduced forming the adobe into bricks, the Indians used a “puddle” or hand-formed technique to shape the adobe and had flat roofs with tamped earth and vigas (poles). The tamped or packed earth acted as insulation and assisted in keeping the homes cool in the summer and warm in the winter.

Best viewed by taking a walking tour, the seven adobe brick buildings that make up the Barrio de Analco Historic District provide visitors with a glimpse of old Santa Fe and of the Spanish Pueblo and Territorial architectural styles reflected in the buildings in the neighborhood.