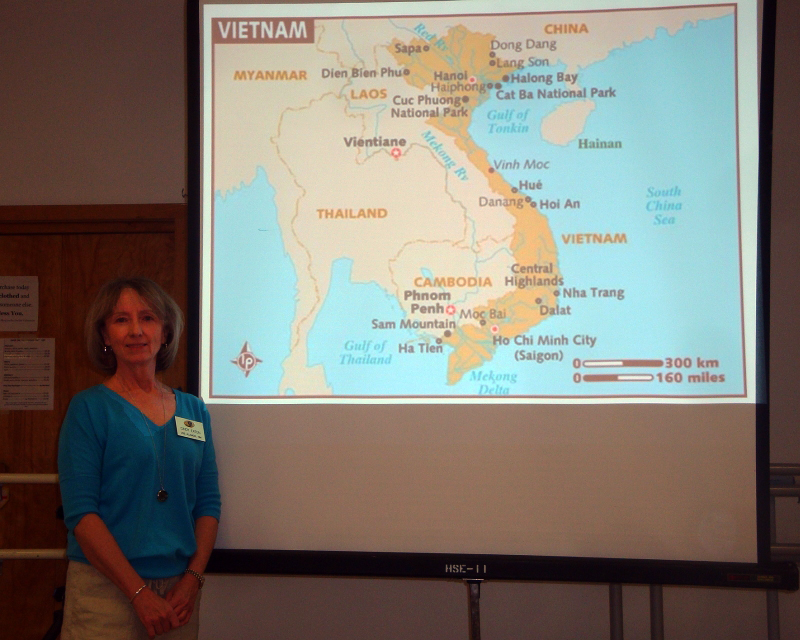 What a difference 46 years can make.

Cindy Eaton, treasurer of Los Alamos Kiwanis and the club’s speaker Feb. 18, recalled that in 1968, she was a senior in high school in Alameda, Calif., who subsequently enrolled at the University of California-Berkeley. She watched the news every night, and it was dominated by stories of battles and body counts in Vietnam.

“All of the years I was there,” she said, “the war was the primary focus.”

While she was at Berkeley, she did her share of demonstrating, but at least once, she got tear-gassed “just for being in the wrong place at the wrong time … It was utter chaos the entire time I was there,” she said.

And then, suddenly, in 1975, the U.S. pulled out, the Viet Cong marched into Saigon, and Vietnam dropped out of the evening news.

In late 2013, when Eaton discovered that she could take an Overseas Adventure Travel tour of Vietnam, she signed up. She told Kiwanis it was “the trip of a lifetime.”

As she began her talk, she stood in front of a slide showing a map of Vietnam, a long, skinny strip down a peninsula, touching the South China Sea on the east, and surrounded by China, Laos, Thailand and Cambodia on the north and west. Some in her audience remembered with a shudder the years when that same map was often broadcast with the evening news to explain what was going on in the war.

“It’s a beautiful country,” she said. “The people are warm and friendly and respectful of Americans. They’re very aware of the price we paid.”

Vietnam is “about the size of New Mexico,” she said, but while New Mexico has about two million people, Vietnam has 90 million—and a lot of the country is jungle.

Her trip started in Hanoi, then took her to Ha Long Bay and Hue (the old Chinese city where the emperor once lived and ruled). The tour group of 11 and its guides then drove to Da Nang and on to Hoi An (a World Heritage site). They flew to Nha Trang and on to Da Lat and Ho Chi Minh City (Saigon).

Her pictures showed streets packed with traffic, including many, many scooters. “Everybody just goes,” she said, and they “weave in and out.” To cross the street, you “raise your hands up … I tried to attach myself to a local.” Above the commercial streets, there are spider webs of exposed power lines. The houses are very narrow and high, with primary living areas on the bottom floors and bedrooms at the top.

She showed markets filled with food—all displayed, uncovered, in bowls, baskets, and other containers. “It’s still very much an agricultural country,” she said. “You buy everything on the street,” she said, including chickens and dogs, in cages, bound for the dinner table.

“Vietnam is a Third World country,” she said, “but the people seem to be very happy.” They also are “fiercely independent,” she added. “All they want is to be left alone” after generations of occupation by several different countries.

Her talk was a travelogue—with a difference:

Vietnam, it seems, honors its war-scarred past, but it is moving on.