VIDEO: Heinrich Calls For A Price On Carbon 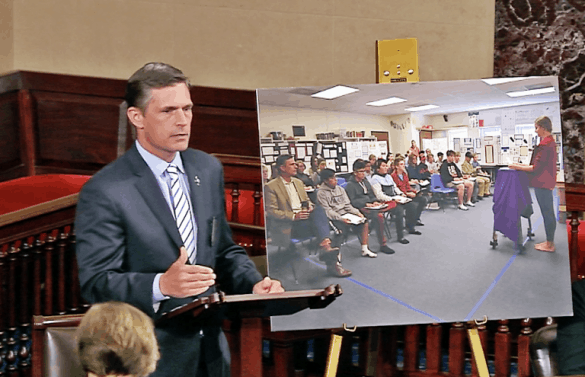 Senator Heinrich is a cosponsor of the American Opportunity Carbon Free Act that would put a price on carbon and curb pollution that is causing the climate crisis. The bill would reduce the nation’s greenhouse gas emissions by an estimated 51 percent by 2029 compared to 2005 levels. It would simultaneously generate an estimated $2.3 trillion over 10 years to boost the economy and aid American workers and consumers.

Senator Heinrich has been a leading voice in the Senate on the need to combat climate change. As a member of the Senate Democrats’ Special Committee on the Climate Crisis, he is helping to lead the effort to finally implement real solutions to eliminate carbon pollution, mitigate the devastating effects of climate change, and create a managed transition to an economy run 100 percent on clean energy.

Senator Heinrich’s remarks as prepared for delivery are below:

A new generation of young leaders in my home state of New Mexico and all around the world recognize that the climate crisis is not just urgent, but truly existential.

These young students and activists are demanding that their elected leaders get to work on implementing solutions to limit its devastating impacts.

I have heard from many students in New Mexico about how we should confront the climate crisis.

Earlier this year, I sat down with students in Santa Fe to hear their ideas on how we should confront the climate crisis.

These students showed an incredible depth of knowledge on climate science and our changing atmosphere.

And they are observing how the climate crisis is already impacting their daily lives.

Talking with young people who are calling on us to save their future drives home how urgent this issue is for our next generation.

And it’s not just high school or college students.

I want to read to you from a couple handwritten letters I received recently from elementary school students in New Mexico.

Brook, age 9, from Albuquerque, wrote to me:

‘The Earth is important to me because if we don’t take care of earth now things are going to get much worse, please do something.’

‘The Earth is important to me because the Earth is the only planet perfect for us. Earth is the place that we live, plants live, where other creatures big and small live. And if we don’t do something about this now, our Earth will not be earth, but Junk. We will have no place live. Please do something. NOW!’

If these children can see so clearly how important it is—how desperately urgent it is—to fight for the future of our planet, why on Earth can’t our nation’s leaders here in Washington?

I think it’s long past time for us to listen to our children who are pleading for us to take action and to leave them with a better world to live in.

It’s long past time for us to think through substantive solutions that can move us away from the carbon pollution that is causing the climate crisis.

That means refusing to allow us to continue down the climate deniers’ desired path of inaction that will only keep us moving toward more and more costly disruptions for our children.

I am focused on implementing real and pragmatic solutions to eliminate our carbon pollution.

That’s why I was proud to join my colleagues, Senator Sheldon Whitehouse of Rhode Island and Senator Brian Schatz of Hawaii, to introduce legislation earlier this year that would finally put a price on carbon.

The scientific consensus is clear: the destructive wildfires, catastrophic hurricanes and extreme flooding we are experiencing are directly linked to our carbon pollution.

When you look at the climate modeling, one of the surest and cheapest ways we can really move the needle is by finally putting a price on carbon.

Because the truth is that carbon pollution isn’t free.

We are all paying the price for carbon pollution in the billions of dollars we are spending each year to recover from climate disruptions like more extreme wildfires, floods, and storms.

We need to stop socializing the cost of that pollution and ask those that produce it to bear its true costs.

In other words, we need to internalize the price of carbon pollution at the source.

Our legislation, the American Opportunity Carbon Fee Act, would collect a fee from carbon polluters.

It would also include a border adjustment provision to ensure that American manufacturers would still be able to compete on an even playing field and that international carbon polluters would also pay a price.

The fee for carbon pollution under our bill would start at $52 per ton and rise 6 percent each year.

This matches the midrange of the estimated cost of carbon that researchers at the Office of Management and Budget under the Obama administration determined in 2016.

Roughly translated, this is the cost that carbon pollution is already costing you and your neighbors because of its devastating effects.

This is the cost that the pollution producers should be paying.

And we can put the revenues raised by this fee on carbon pollution directly to work helping American households.

Our legislation would raise a projected $2.3 trillion over ten years that would be returned directly to American families and the states to help us transition toward a clean energy economy.

States would receive $10 billion each year to help pay for their transition toward clean energy and a clean energy workforce.

This transition represents our greatest opportunity to create millions of new jobs all across America — particularly in our rural communities.

Wind technician and solar installer are already two of the fastest growing jobs in the nation.

States need to put real resources into training our workers for these clean energy jobs.

Our legislation would make that happen.

The rest of the revenue from our legislation would be delivered directly to American families in the form of tax credits and Social Security and Veterans’ benefits.

This is a responsible way forward.

This is the type of market-based climate policy that should have the support of both Democrats and Republicans.

We know that to meet our climate goals and limit the damage wrought by the climate crisis, we must immediately change our trajectory and move toward an economy run entirely, yes, 100 percent, on clean energy.

Our proposal is just one way to take major federal action that would move us quickly in that direction.

I would welcome a full debate here in the Senate on what way is the best way forward.

But what is abundantly clear is that we can no longer afford to debate whether to move forward.

Our climate crisis often feels too big, too complex, and too hard to fix.

However, the scientific fact is: we have created this crisis and we possess the creativity and the tools to fix it.

Our kids understand better than even most of us do that we need to act urgently and decisively.

And that’s our job.