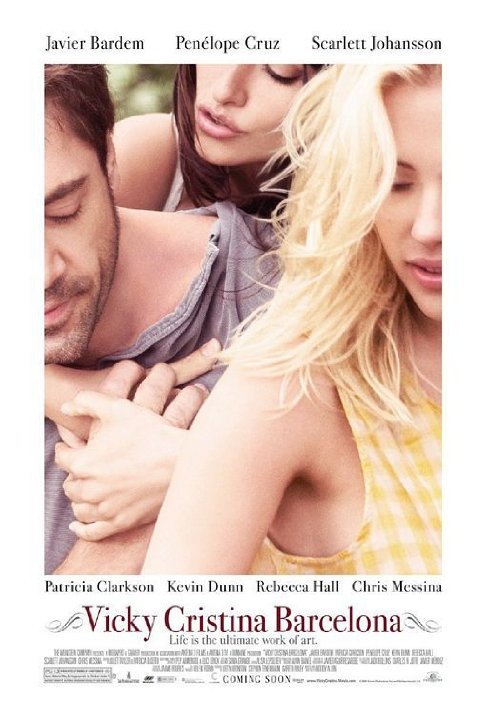 Vicky (Rebecca Hall) wants Doug (Chris Messina), her handsome fiancé. Cristina, fresh from a break-up, only knows what she doesn’t want. When the longtime friends happen upon the gruff-voiced Juan Antonio (Javier Bardem) during a trip to Spain, even Vicky cannot resist a sexual adventure of the highest, PG-13 calling.

“Vicky Cristina Barcelona” has flaws. The narrator waxes a bit too pseudo-sagaciously, the Woody-Allen-ness of the characters often threatens to overwhelm, and the characters don’t, ultimately, change as dramatically as I want them to. But the film succeeds, mostly because of Penélope Cruz.

The film’s strongest scenes feature Cruz as Juan Antonio’s former wife, Maria Elena, who, despite being the stereotypical “crazy ex-wife,” redefines many words associated with love, including “partner” (with whom?) and “commitment” (to what?).

Some of the magic of these scenes might come from the actors’ real-life marriage (Cruz and Bardem have been married since 2010), but whatever the case, Cruz’s energy ─ sensual, artistic, furious, challenging ─ changes everything.

She complicates the film’s questions, and she withholds any easy answers. She takes the film from some attractive, almost soap-opera-y place to somewhere far more thought-provoking. Even when she is not onscreen, she is. Something of her, some color or glow or itch, remains.

It’s well worth watching, if only to invite you think critically about how you love, the limitations of that love, and what would happen if those limits were tested. Because, let’s face it, they will be.

The Free Film Series presents a movie the first Thursday of the month, thanks to the Friends of Los Alamos County Libraries. However, please note that due to the Los Alamos County Fair, “The Other Son” will screen on Aug. 14.