Venturing into the Valley of the Moon 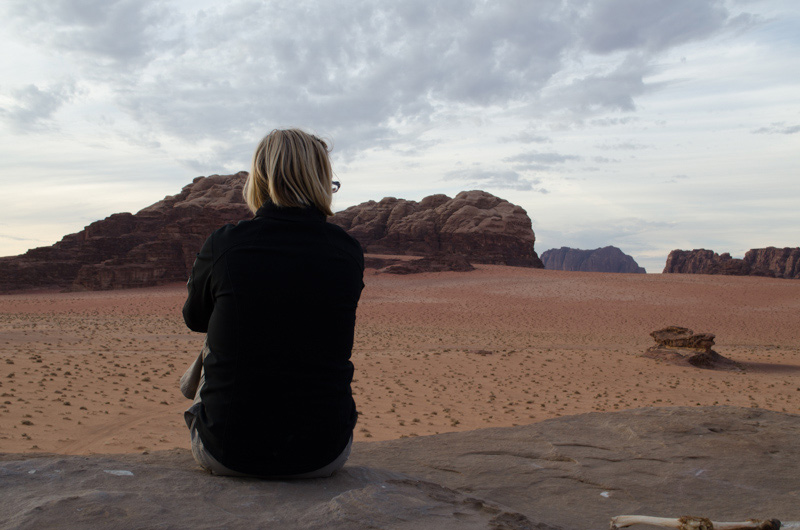 Kerri Frasier in the desert in Wadi Rum. Photo by Jason Frazier 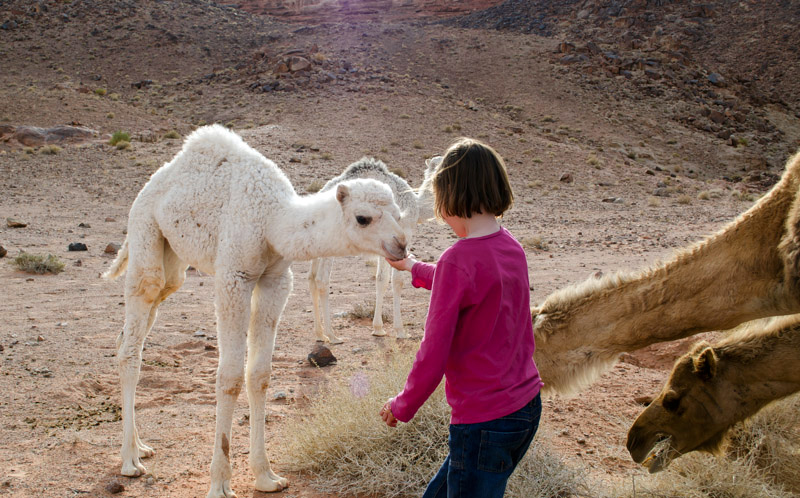 Editor’s note: Kerri and Jason Frazier and their 8-year-old daughter Sydney are traveling around the world. So far, they have visited Europe and the Middle East. They are currently traveling in Thailand. Kerri is the daughter of local storyteller, ecologist and artist Teralene Foxx of Los Alamos.

Venturing into the Valley of the Moon
By KERRI FRAZIER

At the mere mention of Jordan, Petra immediately comes to mind with its’ ancient tombs carved into sandstone rock, camels and eroded canyons. But there has got to be more to Jordan than just one ancient site, right?  In searching our guidebook to answer this question, photos of Wadi Rum, known as the Valley of the Moon. immediately jumped out at us. Upon seeing the stunning beauty of the place reflected in these pictures, it intrigued us so much that we knew that we needed to add this to the list of places to visit.

Normally, we are not a family who goes on guided tours. However after reading more about Wadi Rum, we decided that it was not a place that can easily be accessed without a guide. So after a lot research, we decided to go on a camel and jeep trek with a two-night stay in the desert through Rum Stars Camp.

On the day of our desert trek, we drove from the Red Sea resort town of Aqaba to Wadi Rum, full of anticipation. Our daughter, Sydney, was especially excited about riding camels. After arriving at the Wadi Rum village one of our Bedouin guides greeted us with tea. We enjoyed sipping our tea while the guide discussed with us what the plan was for the next couple of days. Afterwards, we were whisked off on camels into the desert of Wadi Rum.

I must confess here that the camel riding was the one activity I was the least enthused about. I really don’t like riding horses and riding a camel has got to be like riding a horse, right?  But Sydney had wanted to ride a camel since Morocco and we figured this would probably be the best place to do this. 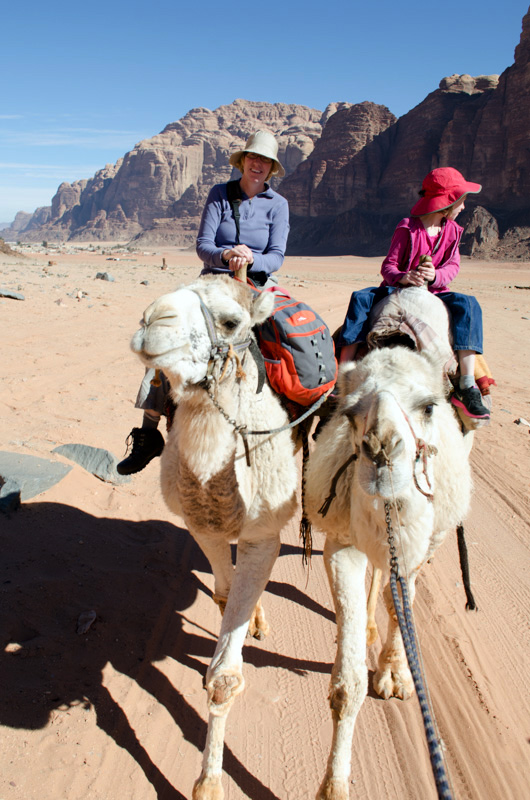 Thankfully, riding a camel is nothing like riding a horse. When riding a horse, after 10 minutes every part of my body starts aching and the rest of the ride becomes all about longing for that moment when I can get off. Riding a camel is very soothing, almost hypnotic, with a gentle back and forth swaying motion.

I am glad that we decided to do the daylong camel trek as it allowed us to absorb the beauty of the desert and the profound peace from a comfortable perch. I must also confess that camels now have a soft spot in my heart. They are surprisingly expressive and are very cute with their long lashes, knobby knees, cute toes, and big flappy lips.

After a day of exploring the desert, eating a delicious lunch with more tea and riding camels, we arrived in the evening at our Bedouin camp. The guides made a delicious traditional Bedouin dinner called zorb, which is meat and vegetables cooked underground. Afterwards, we enjoyed sitting around the campfire, while our guide Salem talked about the life of a Bedouin.

Salem has 13 brothers and sisters and his father has two wives. He explained that the life of a Bedouin is a simple one, with little material wealth. Although there may be little material wealth, most decide to continue with that life, even when there are other opportunities available. After our delicious dinner and campfire discussion, we headed out for some stargazing. I must say I have never seen stars like I have in the desert of Wadi Rum.

We woke up early the next day and enjoyed a typical Middle Eastern breakfast of tea, humus, cheeses, pita bread, olives, cucumbers and tomatoes and then set off on the jeep tour. During the day we got to hike through beautiful red sandstone canyons eroded by time, scramble up rocks, see ancient petroglyphs, eat another delicious lunch, drink more tea, and watch the sunset over Wadi Rum.

However, the highlight of our day was being able to see baby camels. Our guide, Salem, upon finding out that Sydney loves animals and wants a farm when she grows up, drove until he was able to find his cousin’s camel herd to show her the newborn camels. Along the way he spotted a camel skeleton and immediately stopped the jeep. He then jumped out and chiseled out two camel teeth for Sydney. Sydney is very proud of her teeth. 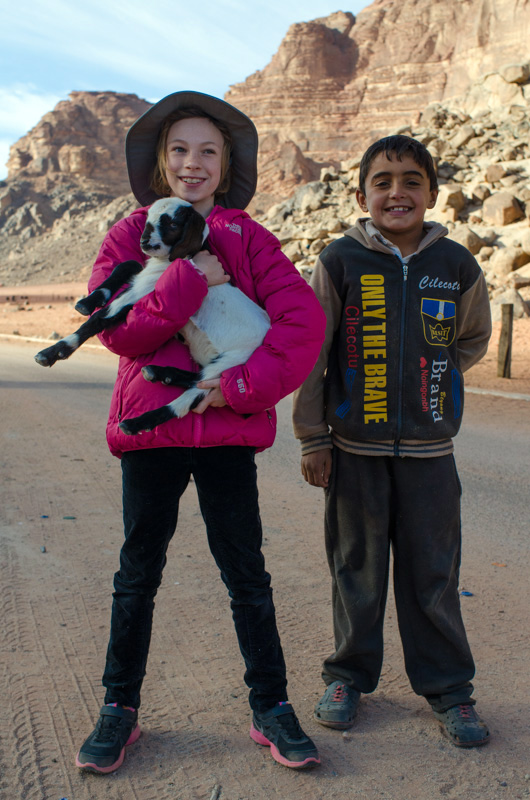 Sydney Frazier and her new friend Abduhl with a baby goat from his herd. Photo by Jason Frazier

After two nights in the desert, an amazing camel trek, and jeep tour, we returned to the village of Wadi Rum. However, before leaving Salem introduced us to his youngest brother Abduhl, age 7, whose responsibility it is to herd the goats. Sydney and Abduhl had fun playing together and chasing and catching baby goats.

Sydney and I also had the opportunity to get a glimpse of the traditional Bedouin life. Just as we were about to get into our car to leave the village of Wadi Rum, Sydney and I noticed some children peeking out behind a gate giggling. We were waving at them when they motioned for us to come in.

We were then invited into the house to share tea with the women and children. Unfortunately Sydney and I don’t speak Arabic and they spoke very little English. At first I felt awkward and uncomfortable with the silence and kept wondering how many wrong things I was doing. But I than began to relax and just enjoy the unique moment in time.

Wadi Rum has by far been one of the highlights for us on our around the world adventure. While there I began to appreciate how much life there is in the desert. There is much more life than what first meets the eye.

It is spring right now and there are flowers blooming. On our hike, we noticed fox, rabbit and possibly wolves’ tracks in the sand and saw tiny green lizards scurrying about. However, it is still difficult for me to comprehend how the Bedouin are able to survive in a land that seems so inhospitable. I have never seen so many stars in the night sky than in Wadi Rum and never been in a place that is so absolutely devoid of noise. It was so quiet that it was almost deafening.

During my time in Wadi Rum, I was also struck by the level of responsibility that the Bedouin children have. While living in Portland, I would have never dreamed of sending Sydney at the age of 7, down the street to the store. However, Bedouin children every day go out into the desert to herd the goats by themselves. What an amazing, unique, but different life from my own.

Jordan has struggled economically within the last couple years with the wars in Syria and Iraq and the influx of refugees. Tourism has dropped significantly due to this. But despite these woes, we were warmly greeted and felt incredibly safe while in Jordan. My only regret is we did not have more time to stay in Wadi Rum.

Wadi Rum is famous for its beautiful rock formation. Photo by Jason Frazier 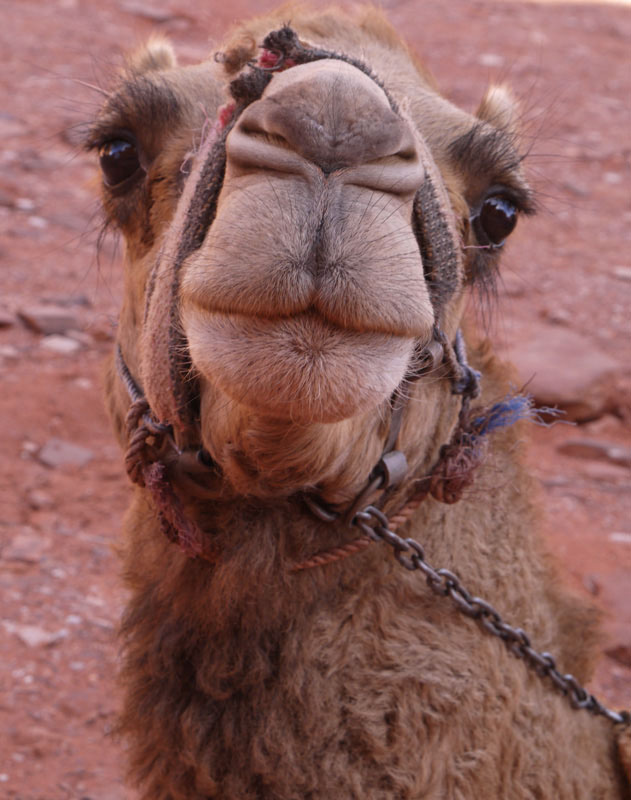 The lovable face of one of the camels on the tour. Photo by Jason Frazier 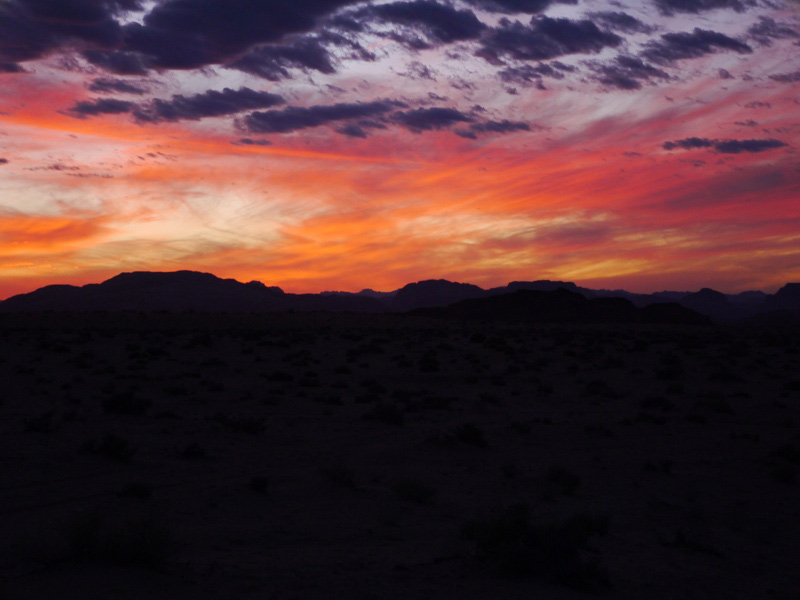