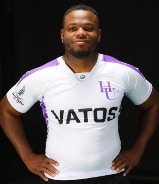 Earl Smith
NMHU News:
LAS VEGAS, NM ― Earl Smith, the New Mexico Highlands Vatos Rugby Club captain and president, is a champion on an off the field.
His team is headed back to the national sevens rugby championship tournament in June looking for a three-peat win and he is nominated for a Life of Significance Award for his volunteer service.
Penn Mutual Life Insurance Company named Smith as a finalist for the national award, calling him a “positive force for good” for his work with the elderly and youth.
Olivia Ramirez is a certified nursing assistant at Vida Encantada Nursing Home and Rehabilitation in Las Vegas where Smith volunteers.
“The patients are always so happy to see Earl and he’s very good with them,” Ramirez said. “He’s extremely kind and respectful. He listens well, which leads to good conversations. Earl also is a fun influence in bingo games and other activities like daily dances. He’s a wonderful volunteer and young man.”
Smith’s ongoing volunteer work with Vida Encantada began with a church friendship.
“There was a gentleman named Mr. Gallegos I knew through Calvary Chapel Church in Las Vegas who got really sick and needed to be in a nursing home. I started visiting him every Sunday. We’d sit down and talk about life and I’d show him our church broadcast on an iPad. We’d pray together that he’d get better and he did. He went home, but it hit me hard to see so many elderly people who seemed lonely and sad. I decided to come back and visit with more of them. We’d talk about everything from family to rugby to school. We laugh a lot and I have a great time. They’re such big-hearted people with a lot of life wisdom.”
Smith also volunteers as a mentor at Corner Stone Church every Monday evening for a bible study with youth. They also get active, playing games like dodgeball and capture the flag.
“The best thing about being around the kids is sharing some knowledge with them that I’ve gained over the last few years and being a positive role model. I also encourage them to never be afraid to express their faith in God,” Smith said.
One of Smith’s Vatos teammates, Justin Stallworth, also volunteers at Corner Stone Church.
Switching gears to thinking about Rugby, Smith said it feels great to be headed back to the National Small College Rugby Organization (NSCRO) Sevens Championship in Philadelphia for the fourth consecutive year. The team has 2015 and 2016 championships under their belts. Sevens denotes the number of players on the field.
“We want to bring home this honor again for our Highlands community and our little town of Las Vegas,” Smith said.
He plays the position called loose-head prop in the front row of the rugby scrum.
“My job is to push hard against the opposition from the left side of the scrum,” said Smith, who when asked said he can bench press 225 pounds.
As a Highlands freshman in 2012, Smith said he didn’t know much about rugby, but was thrown into the fire and learned the ropes from Dick Greene, the Vatos founder and former longtime coach. Brandon Rey, a former Vatos player and 2015 All-American, is the current coach.
“What I love most about our Vatos Rugby Club is that it shows you can take a group of guys from very different ethnicities and backgrounds and develop a strong bond of brotherhood that I believe will last a lifetime. It’s a team sport without individual stats where we all work together in a selfless way to win,” Smith said.
William Hayward, Highlands exercise and sport sciences professor, is the faculty adviser for the Vatos.
“Throughout his four years as a player and president of the Highlands Vatos Rugby Club, Earl has excelled in both roles,” Hayward said. “He is a natural leader and takes the initiative coordinating with USA Rugby in all aspects of eligibility, scheduling and financial responsibilities. Earl is the epitome of a hard, dedicated worker.
Looking ahead, Smith said he’d welcome the opportunity to play rugby at the professional level if the chance arose.
“It’s hard to imagine not playing rugby because it’s been such a huge part of my life,” Smith said.
Right now, though, Smith said he’s focusing on his education at Highlands. The 26-year-old with five siblings was the first in his family to graduate from college in 2017 when he earned his bachelor’s degree from Highlands in psychology with a minor in human performance and sports.
Smith said one of the primary motivators to achieve his education was losing his father when he was 8 years old.
“My dad always stressed education and we’d play math games and do spelling bees and read together. It was a very humbling experience to walk across the stage and receive my diploma, something so many in my African-American community haven’t had the opportunity to do. My mother and stepfather and entire family were so proud of my accomplishment. My grandpa considers me a trailblazer for my younger brothers and sisters,” Smith said.
Smith is continuing his education as a first-year graduate student at Highlands studying clinical psychology and rehabilitative counseling.
“I want to help mentally ill people regain their confidence and establish a happier and prosperous life. My first choice professionally is to work in rehabilitation with traumatized war veterans,” Smith said.
Menu
Los Alamos
34°
Clear
6:53am4:52pm MST
Feels like: 27°F
Wind: 9mph N
Humidity: 34%
Pressure: 30.07"Hg
UV index: 0
SunMonTue
54/34°F
57/34°F
55/32°F
Weather forecast Los Alamos, New Mexico ▸