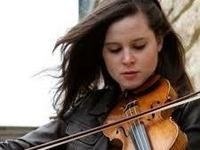 Allison Boyt, a professional violinist and member of the Akron Symphony Orchestra, is hosting a concert Saturday, Jan. 3, at Trinity on the Hill Episcopal Church’s Kelly Hall, featuring local Los Alamos musicians. The hour-long program begins at 7 p.m., is open to the public and includes light refreshments. The event is free of charge with donations accepted.

Boyt is founder of Violin for Vasculitis, a vascular disorder awareness initiative, which she travels nationally to share with audiences in all 50 states. In 2005, at the age of 17, Boyt was diagnosed with a rare auto-immune disorder called Granulomatosis with Polyangiitis (GPA or “Wegener’s Granulomatosis” at the time). The illness began with a simple cough and progressed rapidly to a pulmonary hemorrhage and kidney damage, which nearly claimed her life.

Today, though she still faces some physical challenges, Boyt’s illness is under control with the help of a team of world-class doctors at the Cleveland Clinic. In May 2011, she set off on a journey of personal fulfillment and began her travels to each state in the U.S. to raise awareness of vascular disorders. With nationwide support from the Vasculitis Foundation, fellow vasculitis patients, and regional musicians, Boyt’s Violin for Vasculitis project has seen 20 events in 14 states since it was established in May of 2011.

Dec. 2, Boyt launched an 8-week Indiegogo crowdfunding campaign to raise $5,000, which will allow her to visit an additional 10 states in 2015. After New Mexico, she plans to visit Kentucky, Iowa, Virginia, Oregon, and Florida. Donors to the campaign can access a number of perks, including t-shirts, personalized videos and access to a VIP V4V event in Akron, Ohio. The fundraiser can be accessed at http://igg.me/at/violin4v.

This is Allison’s first fundraising project for the initiative. Boyt says, “Until this time, it has been necessary that most proceeds from V4V concerts be put towards travel expenses, as they are significant. Through this campaign, we are hoping to loosen more funds to be channeled directly to the Vasculitis Foundation, where the money can be used for the Foundation’s goals of patient support and medical research.” All funds that are not used for travel and V4V expenses will be donated to the Vasculitis Foundation.

To learn more about Violin for Vasculitis or donate to the cause, visit www.violinforvasculitis.org.

Violin for Vasculitis is an awareness initiative created by Allison Boyt, professional musician and Vasculitis patient. The initiative strives to educate the public about the rare auto-immune disease, support the Vasculitis Foundation and connect with vasculitis patients and their caregivers through informational performances with Boyt and regional artists. Visit www.facebook.com/violin4v.