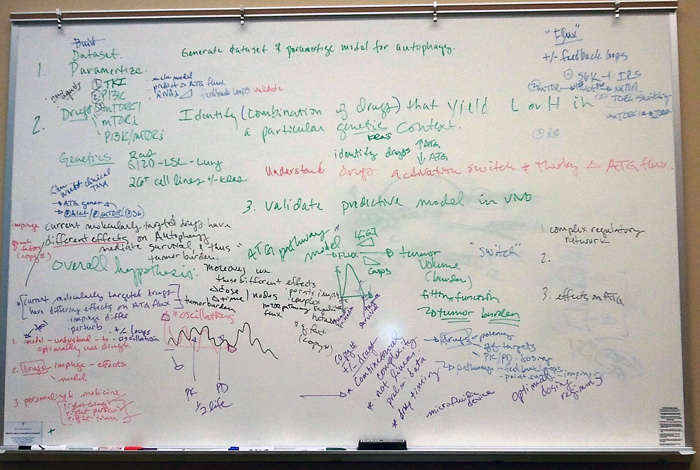 Even the most carefully crafted science projects starts with a rough brainstorm session. This whiteboard is from an early Los Alamos National Laboratory and Van Andel Research Institute team meeting to plan the approach for modeling lung cancer. Courtesy/LANL

Scientists are developing a new tool to better study one of the deadliest types of lung cancer.

“Cancer biology is extremely complicated. To see the whole picture, we need to collaborate with experts in other fields,” MacKeigan said. “Expanding our existing model will give us an important tool for better understanding and better combating one of the most common and deadliest forms of lung cancer.”

Autophagy, or “self-eating,” is a vital process that removes damaged cellular components from healthy cells and is integrally involved in cell fate. Cancer cells can manipulate this process, using cellular waste to fuel their growth and survival. Dysregulation in autophagy also is linked to other diseases besides cancer and, in recent years, has become the target of concerted therapeutic development efforts.

The project is funded by a recently awarded $2.6 million R01 grant from the National Institutes of Health’s National Cancer Institute (NCI) and is based on an earlier model developed by the team. The new project is part of an ongoing collaboration between MacKeigan and Hlavacek’s teams that resulted in a 2013 paper in the journal Autophagy, which described their first model of autophagy in cancer. The newly awarded NCI funding will allow the teams to further enhance and refine this computational model, which is based on precise measurements of autophagy in living cells and intricate mathematical algorithms.

MacKeigan’s lab in Grand Rapids will conduct the experimental research for the study and will send their results to Hlavacek’s lab in New Mexico for model-guided computational analysis. Los Alamos is home to state-of-the-art large-scale computing systems that are an integral component in the development of mathematical models for complex biological systems. As part of these efforts, Hlavacek’s team has worked for more than a decade to develop appropriate theoretical frameworks and practical software tools for modeling cancer pathways.

“Within this new project, we are hopeful that we’ll be able to apply these tools to accurately predict how the immediate effects of a molecularly targeted drug, or a combination of drugs, propagate through cellular regulatory networks to influence a quantitative cellular phenotype, namely the rate of recycling of cytoplasmic constituents through the autophagy pathway,” Hlavacek said.

“Finding perturbations that drive the rate of recycling either up or down could help us figure out how to selectively kill cancer cells.”

Once the model is complete, the team will be able to systematically evaluate a large number of possible therapeutic strategies through simulations to identify the most promising ones, which can then be evaluated experimentally. Although MacKeigan’s team will use the new model to study lung cancers, specifically those with a mutation in the KRAS gene, the model also will be useful for studying autophagy’s role in other cancers.

Lung cancers are responsible for 27 percent of cancer-related deaths in the U.S.—more than any other cancer. Of these, lung cancers with KRAS mutations are the deadliest, and are linked to 40 percent of lung cancer fatalities. KRAS belongs to a gene family known as the RAS genes, which are some of the primary drivers of cancer development and are the targets of a major NCI research effort.

“Our original model has been extremely useful in studying autophagy in cancer, and I am thrilled that we will be able to augment it further,” said Katie Martin, Ph.D., who coordinates the project in MacKeigan’s lab. “We are hopeful that our findings will guide new therapeutic approaches to treat patients who currently have few options.”

Van Andel Institute (VAI) is an independent nonprofit biomedical research and science education organization committed to improving the health and enhancing the lives of current and future generations. Established by Jay and Betty Van Andel in 1996 in Grand Rapids, Michigan, VAI has grown into a premier research and educational institution that supports the work of more than 330 scientists, educators and staff. Van Andel Research Institute (VARI), VAI’s research division, is dedicated to determining the epigenetic, genetic, molecular and cellular origins of cancer, Parkinson’s and other diseases and translating those findings into effective therapies. The Institute’s scientists work in on-site laboratories and participate in collaborative partnerships that span the globe. Learn more about Van Andel Institute or donate by visiting www.vai.org. 100% To Research, Discovery & Hope®