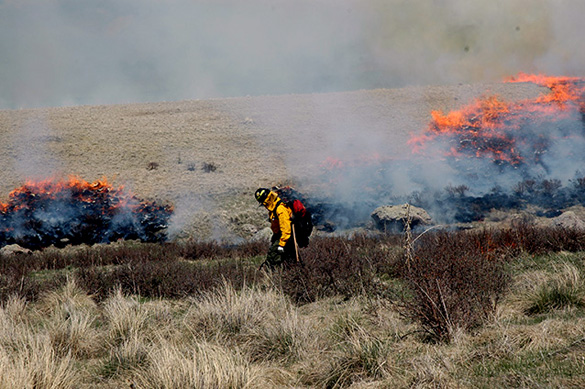 Firefighter ignites prescribed burn at VCNP with a driptorch. Courtesy/NPS

JEMEZ SPRINGS – Valles Caldera National Preserve is planning to implement prescribed burn projects from early October through the end of November, based on suitable weather and fuel conditions.

The prescribed burn will take place within an approximately 1,800-acre project area in the Banco Bonito district of the preserve – north of N.M. 4 near mile marker 30. The burn operations will be completed in phases over a total of 8-10 days and are not expected to cause road closures or disrupt visitor activities elsewhere on the preserve.

Burn days may not necessarily be consecutive as they will depend on weather and fuel conditions.

Through the prescribed burn, NPS officials hope to decrease the potential for future high-intensity fires by reducing hazardous fuel levels and restoring the beneficial role that fire has played in the ecosystem for thousands of years. The area has been previously thinned and larger materials have been removed from the site. This pretreatment will allow firefighters to safely use low-intensity fire to clean up residual slash and remove seedlings that sprouted since the thinning last occurred.

Because of the location and elevation, smoke from the burn may be visible from all directions coming into the Jemez Mountains area. Smoke can linger for a few days after the burn. The pretreatment of the forest has substantially reduced the amount of fuel in the project area and will lessen the associated production of smoke.

However, smoke from any prescribed fire can be a nuisance to some people. It may be a health concern for children, pregnant women, senior citizens, and those suffering from allergies, asthma, chemical sensitivities, or other heart or lung diseases. To reduce exposure to smoke, stay indoors as much as possible with windows, doors and vents closed. Avoid or limit physical activities outdoors.

Information on health impacts from smoke can be found by calling the New Mexico Department of Health at 1.888.878.8992, or visit: https://nmtracking.org/fire.

About 1.25 million years ago, a spectacular volcanic eruption created the approximately 13-mile wide circular depression now known as the Valles Caldera. The preserve is known for its huge mountain meadows, abundant wildlife, and meandering streams. The area also preserves the homeland of ancestral native peoples and embraces a rich ranching history. Visit us at www.nps.gov/vall.

About the National Park Service

More than 20,000 National Park Service employees care for America’s 410 national parks and work with communities across the nation to help preserve local history and create close-to-home recreational opportunities. Visit us at www.nps.gov, on Facebook www.facebook.com/nationalparkservice, Twitter www.twitter.com/natlparkservice, and YouTube www.youtube.com/nationalparkservice.