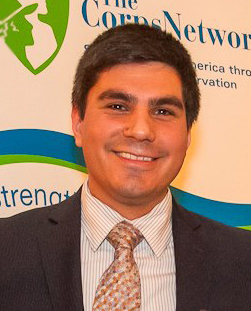 JEMEZ SPRINGS – The Valles Caldera Trust (Trust) today announced the appointment of Jorge Silva-Bañuelos to the position of executive director. Silva-Bañuelos was selected from a competitive field of 24 applicants to fill the position vacated when Dennis Trujillo retired in January.

“Jorge has extensive experience in natural resource policy, management and leadership of government agencies,” said Kent Salazar, chairman of the Valles Caldera Trust Board of Trustees. “His experience working with a broad citizen constituency on public lands issues will also be a great asset to the Trust.”

A native New Mexican, Silva-Bañuelos has lived and worked in Washington, D.C. for the last 10 years. For eight of those years he worked for Sen. Jeff Bingaman in his personal office and later as a professional staff member on the Senate Energy and Natural Resources Committee where he handled New Mexico public land, natural resource and conservation policy. During his time with Bingaman, Silva-Bañuelos laid the foundation for the designation of both the Río Grande del Norte and Organ Mountains-Desert Peaks National Monuments. He also oversaw policy matters related to the Valles Caldera, and worked to secure funding for the Preserve.

“The Valles Caldera has the potential to become a premier tourist destination and a major economic driver for northern New Mexico,” Silva-Bañuelos said. “I will work closely with the board, surrounding tribes and other local communities to promote a vision that increases public access, protects the natural and cultural resources of the Preserve and stimulates job growth in the nearby communities.”

During the last two years, Silva-Bañuelos has worked as a policy advisor for the assistant secretary for Fish and Wildlife and Parks at the Department of the Interior. Last year he was a member of the inaugural class of the President’s Leadership Workshop, a six-month leadership development program sponsored by the White House. He holds a B.A. in International Relations and Spanish from the University of San Diego.

Silva-Bañuelos and his wife, Ellen Castrone, an art historian from Boulder, Colo., who works at the Smithsonian Institution’s National Museum of American History, are thrilled to be returning to the West. For Silva-Bañuelos it is a return to the mountains and valleys he hiked while growing up in New Mexico.

“It is a sincere privilege to be entrusted with the protection of these special places for the benefit of current and future generations,” Silva-Bañuelos said. “My wife and I look forward to coming home, and to start exploring these mountains once again.”

“I can’t say enough about the great job Tim has done during these turbulent months,” Salazar said. “He has been a great help to the board and I’m sure will be a great help to Jorge.”

Silva-Bañuelos will start the job in early July.