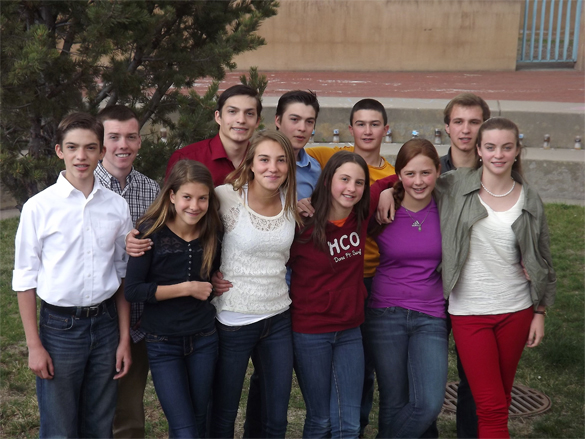 The Jemez Mountain Home School Speech and Debate Team (JMHS) may not be attending the LAHS Hilltalker-hosted Speech and Debate tournament this weekend because the Hilltalker head coach has challenged the validity of the team’s status with the New Mexico Activities Association (NMAA).

The coach initiated contact with the New Mexico Activities Association over the summer to question Jemez Mountain’s eligibility to compete in speech and debate activities in New Mexico. Last week, she contacted the National Speech and Debate Association to initiate a transfer of JMHS students to Los Alamos High School (LAHS).

Carolyn Connor, the Jemez Mountain Speech and Debate team coach, received the entry rejection Friday, Sept. 18, in a notification in which the Hilltalker head coach indicated that the JMHS registration for the Los Alamos High School Speech and Debate Invitational has been deleted.

In response, Connor said, “We are shocked and saddened by these actions. It is difficult to view them as anything less than discriminatory and a denial of equal access. It appears to be an overt attack on school choice and on homeschooled students in the Los Alamos Public School District, which is all the more shocking because my experience with the Los Alamos Public Schools has been historically overwhelmingly positive.”

Connor notes that she has been reaching out to the Public Education Department, elected officials, and others to understand the situation and has received strong support, including from State Rep. Stephanie Garcia Richards, who is an active proponent of education and of school choice for the families in her District.

Connor said, “It is our understanding that Los Alamos Public Schools Superintendent Kurt Steinhaus stands ‘pen in hand’ ready to sponsor the Jemez Mountain Home School Speech and Debate Team under the School District, if the NMAA will allow it.”

Jemez Mountain will have the opportunity this morning to present its case and ask that question when it meets with the New Mexico Activities Association Board.

“It is our hope that the NMAA will allow the Los Alamos Public School District to sanction the team and that we will be able to get back to doing what we love to do, which is to help students learn and grow and engage,” Connor said, further noting that presently more than 90 percent of New Mexico public high schools do not offer speech and debate programs for their students.

There are currently only eight high schools (only five of which are public schools) registered in the NSDA NM District, which covers the entire state.  Connor believes that the discussion should be focused on increasing access for all students across the state and that the Jemez Mountain program is an example of a successful program that does exactly that.

The Jemez Mountain team, which is also based in Los Alamos, is beginning its 18th season of speech and debate competition in New Mexico, competing with public, private, and charter school students from across the state, as well as nationally. The Team has been supporting and participating in the annual Hilltalker’s tournament every year for more than 15 years. Coach Connor, a Diamond Coach in the National Speech and Debate Association and 2014 NMDA Speech Coach of the Year, has led the Jemez Mountain team for the past 13 seasons.

The team serves local homeschool parents seeking to incorporate public speaking and argumentation into their home school curriculum. The Jemez Mountain program offers a guided practicum-based course in which the students learn by doing and by teaming. Coach Connor provides individual and classroom coaching and works closely with parents to tailor a course that matches individual student skill level, needs, interests, and life goals. In a typical year, there are between six and 12 middle school and high-school aged students in the Jemez Mountain program.

The Jemez’ approach has been quite successful. Over the years, its students have earned All-American and Academic All-American recognition, as well as membership in the National Forensic League, a national honor society for speech and debate, and its students have gone on to college to major in a variety of fields, including Theater, Chemical Engineering, Journalism, Computer Science, Horticulture, Political Science, and International Relations, among others.

The Team has been instrumental in helping several students stay with their studies and finish their high school education. The team has earned a place at 11 NSDA National Tournaments, having earned 17 National Qualifications in a variety of events including Lincoln-Douglas Debate, Public Forum Debate, Student Congress, Original Oratory, Extemporaneous Speaking (both Domestic and International), Humorous Interpretation, and Dramatic Interpretation.

The Jemez Mountain students are prepared and ready to compete this weekend with the best and brightest students from across the state if they are given the chance.