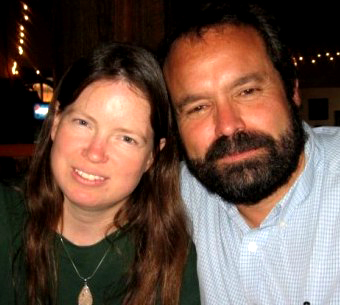 Sonja Salzman and her husband Dave Keller. Courtesy photo
Sonja Salzman is the winner of the Los Alamos Daily Post Valentine’s Day Story Contest. She wrote about her friend Kara who received a devastating blow one Valentine’s Day and a miracle on another Valentine’s Day. Salzman will receive a dinner for two at the Blue Window Bistro in downtown Los Alamos and a bouquet of flowers. Here is her story:
A Forever Family
By SONJA SALZMAN
Los Alamos
It all ended on Valentines Day.
Kara had been dating Richard for over three years, and that night they were going out for dinner to celebrate their first Valentines Day together as an engaged couple. Kara was looking forward to the evening with her fiance, and she was really looking forward to becoming Richard’s wife. She had always wanted to get married and have children, and now she felt so close to reaching her longtime dream.
Kara was happily thinking about Richard as she chose her outfit for their date. She put on her favorite earrings that her grandmother had given her as a teenager. They were long and sparkly, which was perfect for the romantic evening she envisioned. She could not wear them during the day at her job at the Youth Center, where she worked with foster children and often babies, who would pull long earrings.
The doorbell rang, and Kara opened it for Richard. She was surprised to see that he was not the least bit dressed up. “Would you like to come in?” she asked. He declined and said, “No – this would be best to say here and now. My old girlfriend moved back into town a few months ago, and we realized that we still have feelings for each other. She’s out in the car now. I’m sorry, but I can’t marry you after all.”
Several months passed before Kara’s stunned feeling finally went away. It took much longer to shake the sadness about Richard. Kara’s days were full though trying to help young foster children and teens cope with their feelings of abandonment. So many of these foster children had such sadness and pain in their lives, and she felt for them acutely. It was impossible to understand how anyone lucky enough to have given birth to any of these children could abuse them and then just walk away.
After several unsuccessful years of dating, Kara put her name on a list to become a foster parent. She just knew that she could be a great foster parent to a child like the ones that she worked with. She was sure that she could take any child into her heart as well as into her home if only she could have that chance. Her single status was a strong strike against her according to the placement system, but at least she had all the right contacts to make that miracle happen for her.
She got the call late one afternoon from a social worker she knew well in a neighboring town. “Kara, I have a sibling group of four. Can you take them starting tomorrow? It’s twin seven-year-old girls, a four-year-old girl, and a baby. I don’t have anyone registered who could take them on such short notice.”
“A baby?” whispered Kara. “They want to give me a baby?” Kara had expected an older foster child or possibly an older sibling group, but she had never expected to receive an infant since nearly all infants went to two parent homes. “Of course I’ll take them!” Kara cried with a mixture of joy and shock.
She mentally created a long list of all the things the children would need at her house tomorrow as she drove to the store. She bought clothes, bedding, a crib, carseats, formula, diapers, wipes, bottles and some stuffed animals. Her car was full to bursting with all of the supplies. The nesting instinct comes to all mothers whether or not a pregnancy is involved. Kara sat up all night getting their rooms ready and assembling the crib.
As her colleague handed Kara the baby the next morning, she knew she felt just the same way as birth mothers feel when they hold their babies for the first time. “I can’t believe you’re mine,” she whispered to him as she kissed his tiny forehead. The little girls were shy at first, but they enjoyed the toys, and Kara was great with them after her years of experience at the Youth Center. In a very short time, Kara just couldn’t imagine her future life without these children.
After many months, Kara’s application to adopt all the siblings was approved. Kara held the baby in her arms, and all of the little girls stood beside her as they waited before the judge in the courtroom. The judge asked each girl if she wanted to live with Kara. Each girl said in turn, “Yes – she’s my Mommy!”  The judge smiled and said, “In that case, I approve this application of adoption, and you five are now a Forever Family. Congratulations!” Kara and the girls agreed that it was the happiest day in all of their lives.
The judge signed the adoption decree on Feb. 14. It all started on Valentines Day!
Menu
Los Alamos
52°
Fair
7:22am6:15pm MDT
Feels like: 48°F
Wind: 8mph SSE
Humidity: 45%
Pressure: 29.86"Hg
UV index: 0
WedThuFri
54/34°F
59/39°F
63/41°F
Weather forecast Los Alamos, New Mexico ▸