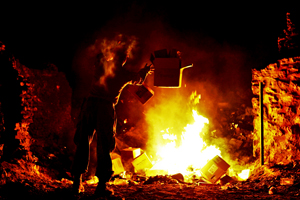 WASHINGTON — U.S. Sen. Tom Udall, D-N.M., in partnership with the U.S. Department of Veterans Affairs (VA), is asking veterans to help create its Open Burn Pit Registry for military service members, civilian personnel and veterans who were exposed to toxic chemicals and fumes from open-air burn pits in Iraq and Afghanistan.

Udall coauthored the legislation to create the burn pit registry, which the president signed into law earlier this year, to help ensure veterans receive care for medical conditions they may have developed as a result of exposure to fumes from burn pits. The VA is now in the process of creating the registry and is seeking input from veterans about a Web-based questionnaire that will be used to finalize the registry.

From now until Aug. 20, 2013, active-duty service members, veterans of Operation Iraqi Freedom or Operating Enduring Freedom in Afghanistan and current/past civilian personnel in Iraq or Afghanistan are encouraged to provide feedback to the VA.

Veterans can submit their comments directly to the VA by emailing cynthia.harvey-pryor@va.gov or by mail to Cynthia Harvey-Pryor, Veterans Health Administration (10B4), Department of Veterans Affairs, 810 Vermont Avenue NW., Washington, D.C. 20420.

Comments received will help the VA get the final questionnaire right, which ultimately will help veterans get their information into the registry more quickly and accurately. Veterans should not complete the proposed questionnaire at this time because it is a draft working document and subject to change.

Senator Udall is committed to making sure the VA works expeditiously meets the one-year time frame as required by the law passed earlier this year to establish the Open Burn Pit Registry.

When the registry is up and running, it will help VA monitor the health conditions affecting veterans, keep veterans informed about studies and treatments, and allow the VA to gather and disseminate more detailed information to health professionals. It also will help patients, doctors and the VA determine to what extent air pollution caused by open air burn pits has led to medical conditions among service members.

The registry will be similar to the Agent Orange and Gulf War registries, and will be open to eligible veterans who may have been exposed to airborne hazards in the Persian Gulf region.

Udall began work on this legislation after meeting MSgt Jessey Baca and his wife Maria of Albuquerque, who detailed Jessey’s battle with cancer, chronic bronchiolitis, chemical induced asthma, and numerous other ailments believed to have been caused by exposure to burn pits in Iraq. The bill was passed by the Senate in December 2012 and signed into law on January 2013.

Last month, Udall successfully included language in the FY 2014 Military Construction and Veterans Affairs appropriations bill requiring a report from the VA to detail its implementation efforts for the registry, improve and present a plan for increasing outreach to veterans and their families affected by open-air burn pits, and provide an explanation of how the VA plans to inform VA physicians about the findings of the registry to improve care for veterans.

Udall and Senator Bob Corker (R-Tenn.) have announced they sent a bipartisan letter to Secretary of Defense Chuck Hagel asking for immediate action to halt the use of open-air burn pits at two camp sites supporting Operating Enduring Freedom in Afghanistan, following reports by the Special Inspector General for Afghanistan Reconstruction (SIGAR) that found the burn pits were utilized without need and at great danger to the health of U.S. military and civilian personnel.