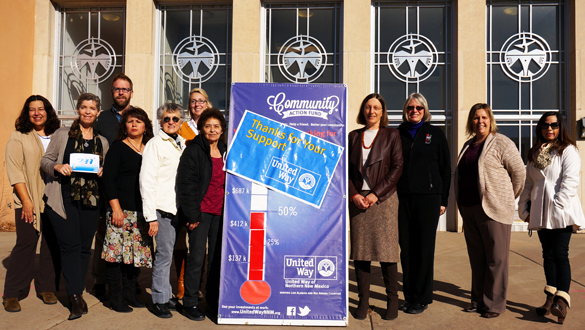 Thank you Los Alamos and Rio Arriba counties for helping to raise more than $500,000!

Thousands of individuals in our communities are touched by United Way fundraising. An estimated 18 percent of the population in Los Alamos and Rio Arriba counties were impacted by programs and non-profits funded by the United Way of Northern New Mexico (UWNNM) Community Action Fund.

A number of those non-profits came to help close out United Way’s fundraising campaign and to say thank you for your generosity.

UWNNM will get to work on making an impact in Los Alamos and Rio Arriba by creating programs through collaborations and funding nonprofits all focused on the most pressing, current needs in the community.

“In previous years, the perception has been that United Way’s work is done after all the money is raised. That is far from correct,” says UWNNM Executive Director Kristy Ortega.  “We have been tracking what is going on in the Los Alamos and Rio Arriba all year long.  We have formed working relationships with organizations to put us in a position to assure the funds raised make the most impact possible.”

Grants from the Community Action Fund will be available in March. If you are serving residents in Los Alamos or Rio Arriba County in the areas of Education, Financial Stability, and/or Health, follow UWNNM to see when the requests for proposals for grants are announced.