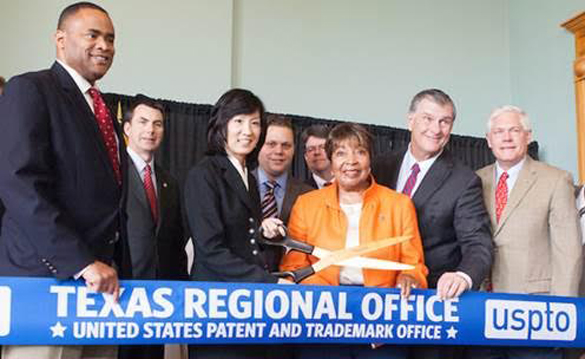 Dignitaries cut the ribbon Monday to officially open the permanent location for the Texas Regional United States Patent and Trademark Office, which will serve New Mexico. Courtesy photo
USPTO News:
WASHINGTON, D.C. ― Under Secretary of Commerce for Intellectual Property and Director of the U.S. Patent and Trademark Office (USPTO) Michelle K. Lee, participated in a ribbon-cutting ceremony Monday to officially open the permanent location for the Texas Regional United States Patent and Trademark Office.
Located in the Terminal Annex Federal Building in Dallas, the new office will help New Mexico and the Southwest region’s entrepreneurs advance cutting-edge ideas to the marketplace, grow their businesses, and more efficiently navigate the world’s strongest intellectual property system.
“The opening of the Texas Regional Office will have far-reaching and long-lasting benefits for inventors and entrepreneurs throughout the central southern portion of the United States, and beyond,” Lee said. “This regional office shows that we are committed to ensuring innovators and entrepreneurs have the resources and IP protections they need to compete and grow in today’s global economy.”
The new office will assist the USPTO in fostering and protecting innovation. USPTO services will be readily accessible to all applicants and the office will serve as a hub of education and outreach to the Southwest region.
The office will benefit from hiring local talent for both examiners and Patent Trial and Appeal Board (PTAB) judges within the intellectual property and technical fields.
The Texas Regional office will help entrepreneurs market their products quickly and provide resources tailored to local start-ups.
“This office means that applicants won’t have to fly across the country to do business with our nation’s innovation agency,” Lee said. “Applicants will be able to come to this regional office, in their own backyard, in a city that exemplifies the can –do entrepreneurial spirit that made our nation great.”
Following the ceremony, Lee toured the new facility, with Dallas Mayor Mike Rawlings and U.S. Rep. Eddie Bernice Johnson.
In an era where our stakeholders’ businesses are rapidly evolving and the intellectual property (IP) landscape is constantly adapting to new and emergent technologies, it’s important to ensure the USPTO can engage effectively with communities, industries, and innovators.
The USPTO’s regional offices play a crucial role in these efforts, assisting inventors, entrepreneurs, and small businesses in their respective regions, while supporting the USPTO’s core mission of fostering American innovation and competitiveness.
The USPTO also recently announced the launch of a nationwide Partnership with the Startup Community – the USPTO’s Startup Partnership.
The USPTO’s Startup Partnership will empower young, high-growth businesses. It will provide for the development and cultivation of a set of programs and resources tailored to the unique needs of the startup community.
The USPTO announced in July 2012-when opening its first regional office in Detroit, Michigan-plans to create three more regional offices across every continental U.S. time zone.
The Rocky Mountain Regional Office was opened in Denver in 2014. The Silicon Valley Regional Office was opened last month in San Jose, Calif. The Texas Regional Office is the last in the series of offices to be opened.
The Texas Regional United States Patent and Trademark Office, stands as a symbol of the region’s rich history in innovation and technological savvy.
Menu
Los Alamos
41°
Fair
6:56am4:51pm MST
Feels like: 41°F
Wind: 0mph N
Humidity: 40%
Pressure: 30.23"Hg
UV index: 0
WedThuFri
59/36°F
57/36°F
55/32°F
Weather forecast Los Alamos, New Mexico ▸