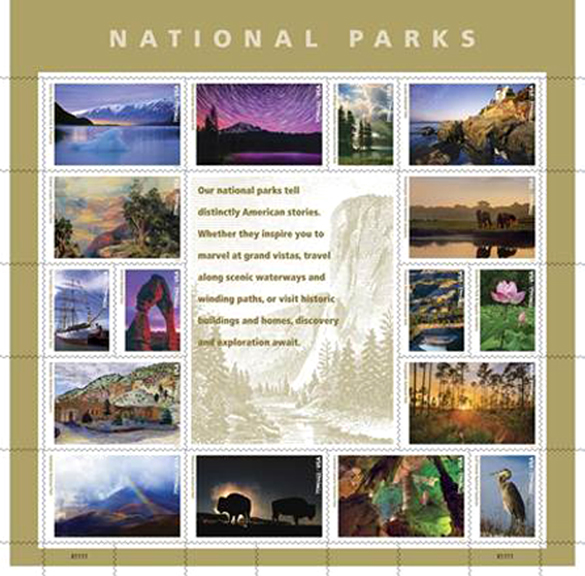 This sheet includes 16 different stamps, all of them showing views of national parks or plants, animals, artwork, objects, and structures found in or associated with a national park. Courtesy/NPS

NEW YORK — Postmaster General Megan J. Brennan helps the National Park Service celebrate its 100th anniversary with the dedication of the pane of 16 National Parks Forever stamps .The first-day-of-issue ceremony took place in New York City at the World Stamp Show-NY 2016 – which is the world’s largest stamp show and is only held once a decade in the United States.

“The men and women of the National Park Service preserve public treasures that extend beyond the stunning vistas and habitat for wildlife that we associate with our National Parks. They provide public places for recreation, they manage museums and historical estates, and they maintain our most famous monuments,” said Brennan in dedicating the stamps. “The National Park Service exemplifies our collective desire to preserve our connection to the land, nature and our heritage, and to maintain what we find beautiful in our world for the benefit of future generations.  And the US Postal Service is honored to help celebrate the 100th anniversary of the National Park Service through the issuance of 16 stamps commemorating America’s National Park System.”

“This beautiful stamp series showcases the variety of national parks available for all to enjoy,” said National Park Service Deputy Director Peggy O’Dell who joined Brennan in the dedication ceremony. “From a small oasis in the nation’s capital to the wild splendor of Alaska, with beaches and historic sites and natural wonders in between, the stamps represent parks of all shapes and sizes. We hope the stamps encourage everyone to Find Your Park during the centennial.”

This sheet includes 16 different stamps, all of them showing views of national parks or plants, animals, artwork, objects, and structures found in or associated with a national park. Small type on the margin of each stamp indicates its location.

The image at the center of the sheet is a detail of the 1-cent Yosemite stamp issued in 1934, rendered here in light brown.