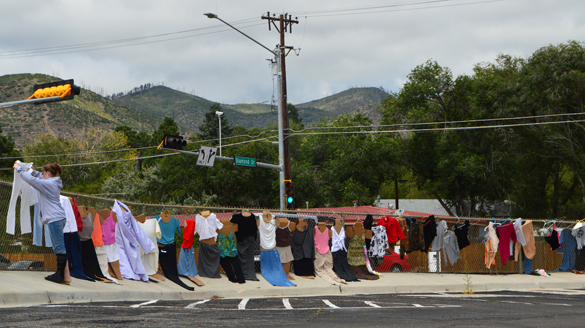 Zia Realty Group Owner/Broker James Chrobocinski this morning with his sold sign outside the Hilltop House Hotel. Chrobocinski brokered the deal together with Terry Salazar to sell the hotel to Atomic City Investments. Photo by Carol A. Clark/ladailypost

Update: Marketing Director Stacey Glaser told the Los Alamos Daily Post a few moments ago that details are being evaluated regarding a restaurant and conference center for the renovated hotel. She said getting the hotel open is the immediate focus. The adjacent convenience store is under consideration but the gas station will open in the future, she said, adding that the hope is to have the hotel fully renovated and open for guests by the upcoming ski season.

The Hilltop House Hotel at 400 Trinity Dr., in Los Alamos has sold to Atomic City Investments.

Atomic City Investments is comprised of members of the Sipapu Group, which took over management of Pajarito Mountain Ski Area last fall.

“The Hilltop House Hotel is the gateway to our town and I think these are the perfect guys to own it and bring it back to life,” Chrobocinski said. “They are making a significant investment in our community and I’m really looking forward to the exciting results.”

The terms of the sale are undisclosed but Chrobocinski did say that the new owners plan to renovate the building and create a modern new boutique hotel.

The Hilltop House Hotel went into foreclosure in the fall of 2012. During a public auction in March 2013, LANB entered a cash bid of $2.9 million and successfully gained ownership of the hotel and adjacent gas station and convenience store, which have been shut down and up for sale ever since.

“We are excited that the Hilltop House will have a new future and wish the best to the new owners on their venture,” Gulas said.

Indications that the hotel was in trouble first surfaced in August 2012 when investors discovered that their managing partner had put the hotel up for sale. The hotel then failed to make its $26,000 monthly mortgage payments, spurring LANB to file foreclosure proceedings against the hotel in October 2012.

Los Alamos businessman Roger Waterman and his family were the largest investors among a group of 17 who put money into purchasing the hotel for $4.8 million in 2005. Waterman’s father originally built the hotel, which included bringing in portions of a church.

“The world has changed since the Hilltop House Hotel was built and it was a struggle to put it together back then,” Waterman said. “If someone has an idea to make it attractive and profitable for our town – I think the community will support it and I wish the new owners the best.”

Editor’s note: Calls to the new owners were not immediately returned.