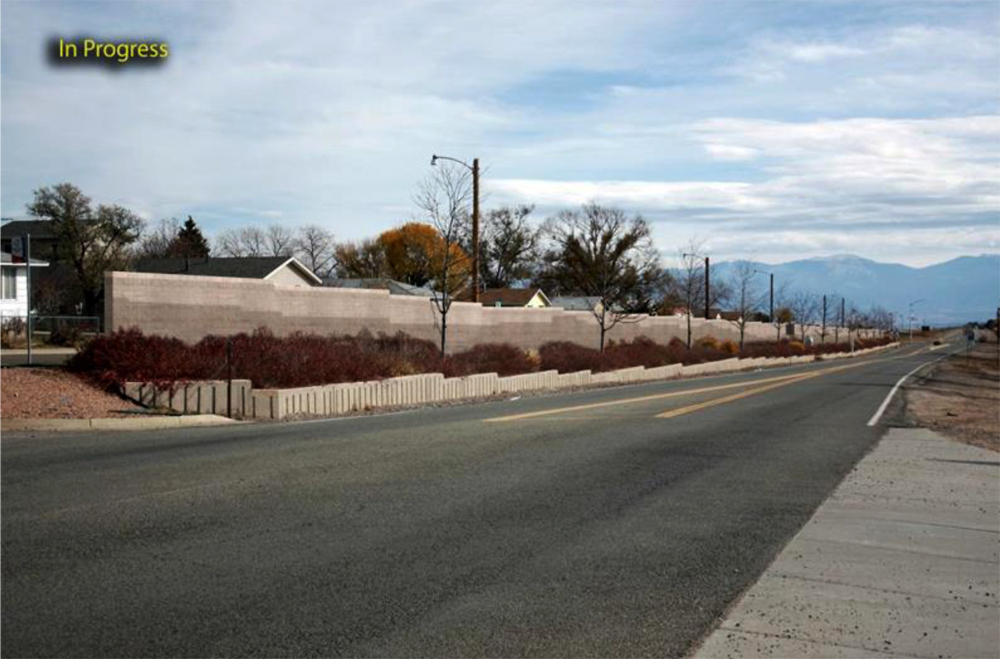 Rendering of the sound wall that will be constructed between Tewa Loop and Airport Road beginning June 23. Courtesy/LAC

Update as of June 6:

Council awarded the bid for construction of sound wall between Tewa Loop and Airport Road  to H.O. Construction at its May 27 Council meeting. Construction is scheduled to start Monday, June 23.

The Council approved budget for this project is $760,500 and includes design and construction costs.

Starting Wednesday, June 11, the rose bushes growing in the sound wall construction site will be transplanted to the area just east of Airport Road between the roadway and the airport fence.

In the continued effort to address sound concerns raised by the Eastern Area residents between Tewa Loop and Airport Road, staff worked with the NMDOT District 5 to have the NM502 speed limits reduced. Staff received the NMDOT’s Speed Limit Declaration Dec. 11, 2012, setting the speed limit between DP Road and just east of Airport Road to be 35 miles per hour. New speed limit signs have been installed.

The sound levels in the Eastern Area will be reduced if the revised speed limits are obeyed. The previous Los Alamos NM502 Noise Study identified, “the noise mitigation strategy is a combined solution of constructing a barrier wall in conjunction with reducing vehicle speed on NM502.” After the speed limit reductions were completed, the consultant took new sound measurements and made recommendations based on the barrier wall being located in the landscaping between NM502 and East Road.

The County’s consultant presented the updated noise analysis findings to neighborhood residents at a June 11 public meeting at the Airport Terminal Building. A copy of the updated noise analysis is available for review. Approximately 17 members of the public participated in the meeting. The consultant’s presentation included Noise Model Results, Decibel Reduction Tables, Noise Wall Layouts, Noise Wall Material Types and a Summary. You are invited to review the handouts from the meeting, which covers the above topics.

Of those who indicated a preference for a specific wall type and color, 11 preferred masonry block with a rustic reddish/brown color because it was more residential in appearance over the other proposed wall material types. The consultant’s recommendations are that effective noise mitigation is feasible, 8-feet is the optimal wall height.

Staff verified underground utility locations to discern where the wall can be placed. The best location would be north of NM502, south of the existing rose bushes (rose bushes would be on the residential side of the wall). There is a concern that if the roses are on the south side of the wall (NM502 side) that they may not survive the reflected heat from the wall or if the wall is located south of the roses that the shade caused by the wall would not allow the roses to grow properly. The best option is to relocate the rose bushes to Airport Road.

Public comments from the meeting are summarized in the Noise Analysis Neighborhood Meeting Summary of the June 11, 2013 public meeting. This document addresses most of the concerns and questions raised at the June 11 public meeting. Please note that the sign in and comment pages have been removed out of respect for the privacy of attendees. These pages will be made available to anyone who submits a public records request.

A public meeting at 90% design completion was held on September 18, 2013 in the Airport lobby. The design will be finalized and prepared for bid. At the meeting, renderings of the wall and landscape plans were requested. Also, staff discussed that the County has identified a graffiti prevention product that has been tested and used on the same type of concrete block in White Rock and this product will be applied to this sound wall.

Since the last public meeting, survey work was completed and temporary construction easements have been obtained. Staff has presented the project concept to the Art in Public Places Board with the Board deferring any art consideration until the project is completed. Also, staff has made a request to NMDOT for a maintenance agreement for the sound wall since NMDOT does not want to assume a maintenance obligation for this sound wall, such as graffiti removal. Finally, because the current design of the sound wall is between eight and nine feet in height in many areas and Code allows a maximum fence/wall height of six feet, a Zoning Code waiver was required and was granted by the Board of Adjustment Nov. 4, 2013.

Renderings and a Landscape Plan have been generated and were presented to the Transportation Board on January 9, 2014 as part of the monthly staff update. Also posted here are copies of the Wall Cross Section and the Wall Profile in addition to a Noise Analysis Update, dated Oct. 8, 2013. You are invited to view the design final rendering.

In order to ensure the best chances of survival for the existing rose bushes, they will be transplanted to the landscaped area east of Airport Road between the road and the airport fence and shade tolerant landscaping will be planted in place of the roses (see Landscape Plan above).

This project was advertised April 13 and 20. The pre-bid conference was held April 28 and bids were opened May 13.