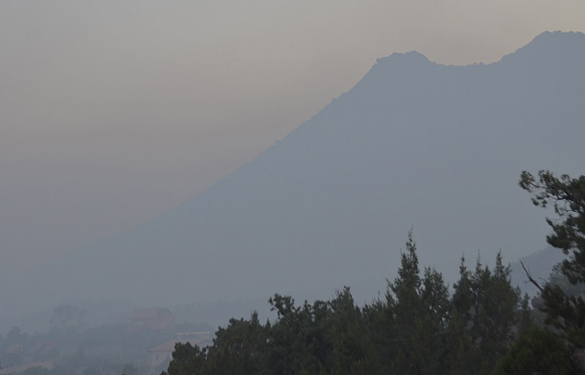 Heavy smoke drifts down into the Jemez Valley overnight and early this morning. Photo by R.W./Jemez Post

Location: Jemez Ranger District on the Santa Fe National Forest, on both sides of N.M. 4 along the southern boundary of the Valles Caldera National Preserve.

The Cajete Fire appears to have started approximately one mile northeast of Vallecitos de los Indios. The fire area runs along the East Fork of the Jemez River and is to the west of the burn scars from the 2011 Las Conchas Fire and the 2013 Thompson Ridge Fire.

Vegetation: Mostly ponderosa pine with some mixed conifer and aspen on the north slopes.

Fire Weather: Temperatures in the low to mid 80s and minimum relative humidities between 4-8 percent are expected to continue through the weekend. Winds are mostly west to northwesterly, pushing the fire to the east and southeast. The fire area has had little to no moisture over the last two weeks, and hot, dry conditions are expected to continue.

Fire Behavior and Smoke: Thursday saw moderate to high fire behavior. We anticipate degrading air quality in the Rio Grande Valley due to smoke from the Cajete Fire.

Drones: Drones pose a serious risk to firefighting and can cause air operations to cease. The public is reminded that “If you fly, we can’t!”

Fire Information: Updates will be posted on the New Mexico Fire Information website at nmfireinfo.com and on @SantaFeNFand www.facebook.com/SantaFeNF.