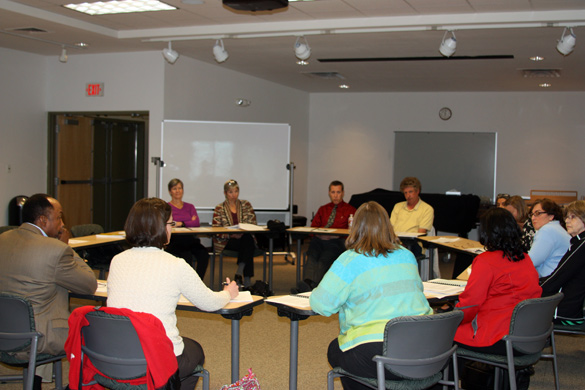 UNM-LA Advisory Board and staff ponder student housing options at Monday’s Advisory Board meeting held at the campus. Photo by Bonnie J. Gordon/ladailypost.com 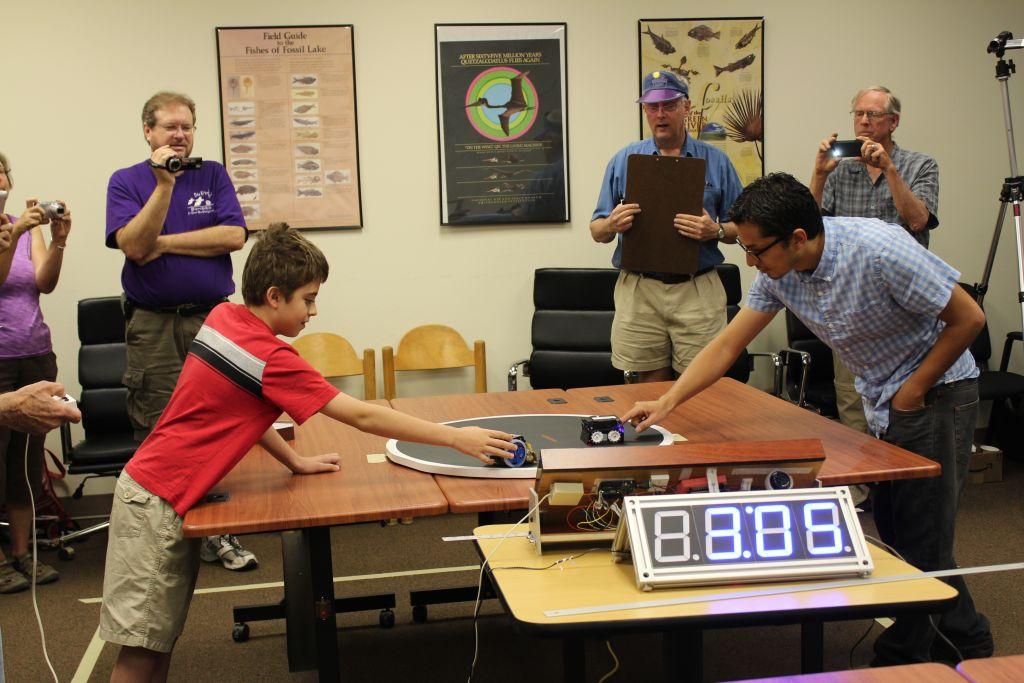 UNM-LA Executive Director Cedric Page catches the ball as Team Y, the LAHS robotics team, demonstrates its robot at Monday’s UNM-LA Advisory Board meeting. The team uses UNM-LA facilities to build its robots each year. This year, the team took second place in the regional competition in Lubbock, Texas – the best the team has ever done in competition. Photo by Bonnie J. Gordon/ladailypost.com
By BONNIE J. GORDON
Los Alamos Daily Post

The UNM-Los Alamos Advisory Board met Monday evening. The Board reviwed progress on dealing with the aging Student Housing buildings on 9th Street near downtown Los Alamos.

Interim UNM Real Estate Director Tom Neal, representing the UNM Board of Regents, which own the property, is spearheading efforts to find a solution to the student housing problem. A UNM team led by Neal is conducting a study to determine the safety status of the buildings as well as to put a value on the two structures and determine whether renovating them would be cost effective.

A team from UNM Safety and Risk Services visited the buildings last week, and although a written report has not yet been received, they have verbally indicated that there are no serious issues, UNM-LA Executive Director Cedric Page said.

A three-person team from UNM led by Neal will visit the buildings today to assess costs and feasibility of renovating them, Page said, adding that a plan to request rezoning of the property in preparation for building a large new multi-user apartment complex on the site has been scrapped.

“The key issue is to insure we put as many ideas on the table as possible,” Board Chair Stephen Boerigter said. “We should work with local property owners who have done renovations on similar properties.”

Student Housing will be open during the summer, but will be closed during the Fall Semester, Student Enrollment Director Katherine Vigil said. UNM-LA staff will pursue avenues to help students find other local housing options at a reasonable price, Page said in answer to a question from Boerigter about the impact of lack of housing on enrollment figures.

The Board received a preliminary report on fall enrollment from Vigil. Although it is still early in the registration process, Vigil said her staff anticipates a 7 percent increase in enrollment, and possibly an increase of as much as 10 percent over last year for the fall semester.

The college is working with Los Alamos High School to develop an Early College in High School Program funded by grant dollars. LAHS must spend $100,000 of the funds by the end of June, Page said.

Vigil said a summer program in fire science offered free of charge for students in grades 8-12 will be offered this summer as part of this initiative. The college is currently involved with the high school in mapping curriculum from programs to be funded under the grant, Dean of Instruction Cynthia Rooney said.