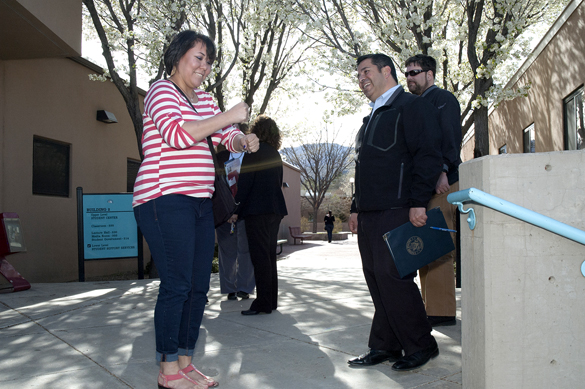 The young, single mother is attending New Mexico Tech in Socorro for mechanical engineering with a minor in aerospace, and as a pre-engineering student at UNM-LA, Lopez was one of five students selected nationally for the Great Minds in STEM scholarship. She was also awarded a scholarship for a poem she submitted to Nota Bene, a Phi Theta Kappa magazine that publishes student works.

Lopez attended a community college in California after graduating high school, but struggled to pay tuition and living expenses while away from home for the first time. She enrolled at UNM-LA in 2010 after returning to New Mexico and again struggled to complete her courses as she was being diagnosed with epilepsy and working full time. She was also pregnant and ended up having her son during finals week, and dropping out again.

When she finished her associate’s degree this past year, Lopez had been going to school off and one for more than 10 years. With the academic advice and personal encouragement of the staff at UNM-LA, Lopez finally found the confidence and skills to complete her degree.

“I can attribute so much to Grace (Willerton, Accelerate Program Career Technical Advisor) and to Elizabeth (Rademacher, Academic Student Success Manager),” Lopez said. “Elizabeth gave academic forgiveness to me about three times after I failed a couple classes. I was such a mess in my 20s. I remember just crying in Elizabeth’s office.”

Rademacher remembered Lopez being an energetic student who came and went from UNM-LA some years before she seemed ready to focus on a field of study.

“I believed Sheri when she told me she was ready to return to school and work hard,” Rademacher shared. “Several months, perhaps a year, later I remember the day she burst into my office and told me, ‘I know what I want to do with my life!’ She was so excited and completely determined. It has been such a pleasure to watch Sheri grow and flourish here. She is someone who will achieve her dreams because she has such a tremendously positive attitude and she exemplifies ‘never give up.’”

Lopez was always good at English and jumped around with majors including literature, to psychology, chemistry, and anthropology. At some point, Rademacher advised Lopez to settle into a major, and Lopez realized math had always come easy for her.

“I remembered being in a math class with Irina Alvestad (UNM-LA Associate Professor of Mathematics), and she always said, ‘I love math!’ and the more she said it, the more I thought, ‘I love math!’” Lopez laughed. “I decided to switch to physics, but there’s no physics program at UNM-LA so I chose pre-engineering. Grace and Elizabeth both agreed it was a good choice, and that’s when I started paying attention to the emails Grace would send out and the opportunities inside every one of them.”

Lopez was referring to the many scholarships, internships, and other academic opportunities that Willerton shared with her Accelerate Program participants, several of which Lopez applied for and subsequently won. “I didn’t get everything I applied for, but you have to try to be considered,” she added. “A lot of students don’t realize all the resources out there for us, or we assume that a scholarship is out of my league. But the more I tried for, the more I got.”

She completed internships at Cornell University, LANL, Fermilab, and XYO. This year she’ll work a Science Undergraduate Laboratory Internship from the Department of Energy, and will attend the Great Minds STEM conference and awards ceremony in Pasadena, California. Lopez submitted a poem she wrote on her cell phone one night when she couldn’t sleep to Nota Bene and won a scholarship for it.

Being a competent essay writer has helped her win awards and internships, she noted, but she’s also had to learn to sell her strengths and talk about her goals clearly, something the Accelerate Program courses helped her do. “If there’s anything I’ve learned over last three years it’s to believe in yourself,” she said. “You have to learn how to be outgoing so others have faith in you. Now I go in to these networking situations with the heavy hitters in the industry, saying, ‘this is what I’m offering’ and I’m confident enough to prove it.”

Lopez is Hispanic and Native American, female, and a single mother, all aspects that lend to the adversity she’s faced. She also says these are marketable characteristics that might provide opportunities for minorities, if one is able to understand the market and talk about oneself. “I also have to be able to back up what I’ve written in my essay about why they should hire me, and that takes buckling down and doing the work. But you should use what you’ve been given in your life, even if it is a stereotype.”

In a recent math class of 80 students at NM Tech, Lopez noticed she was one of only about 10 women. She said there were people along her journey who discouraged her from pursuing a STEM major, and others who questioned her ability to graduate while raising a small child. “I’ve become an advocate for single parents, and for race and gender minorities,” she said. “It’s awesome if people look up to me and see that graduating is an attainable goal.”

Lopez’s strong support system of family and friends continues to buoy her as she pursues her next degree, but she credits the excellent staff at UNM-LA with giving her the push to complete the first one. “They really do want you to succeed,” Lopez said about the advisors and instructors at UNM-LA. “They’ve seen me struggle in life and school, and they’ve seen me become a confident adult. I don’t think I would have been afforded as many opportunities if I weren’t at UNM-LA. It was my saving grace, and they were always there to tell me to keep going.”

For more information about UNM-LA and they degree and certificate programs they offer, contact UNM-LA Student Services, 505.662.0332, or visit losalamos.unm.edu.