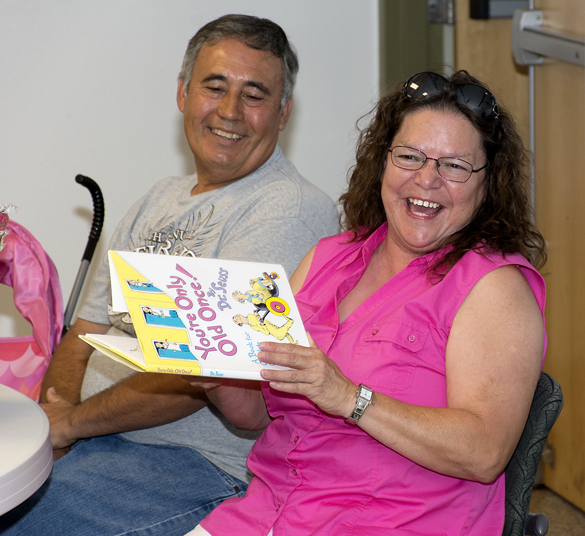 Irene Martinez and her husband Robert, laughed and cried at the gifts presented to her during her retirement gathering at UNM-LA. Courtesy/UNM-LA

UNM-LA bid farewell to long-time employee Irene Martinez after 25 years of service in the enrollment and admissions office.

Almost every student that has attended the university has had some sort of contact with Martinez who called all the students her kids. Martinez served in a number of positions during her time at UNM-LA, including support for the Department of Instruction, but spent the majority of her time in Student Services.

A retirement party was held in Martinez’s honor where faculty and staff enjoyed a potluck lunch and shared stories about how Martinez had made such a positive impact on each of them.

UNM-LA Student Enrollment Director Kathryn Vigil, who supervised Martinez, tearfully said, “Irene was a key employee in this department and she knew a little bit about everything that was going on throughout the campus. She will be sorely missed and impossible to replace.”

Vigil also commented that on particularly difficult days, she was relieved to see Irene’s car in the parking lot each morning and she knew everything would be okay.

On Martinez’s last day, she sent an email to UNM-LA faculty and staff simply stating, “It’s hard for me to say goodbye, so, I will leave with these words, until we meet again.”

Martinez said her retirement plans include spending time with family, taking care of her granddaughter, and hopefully traveling some, too.