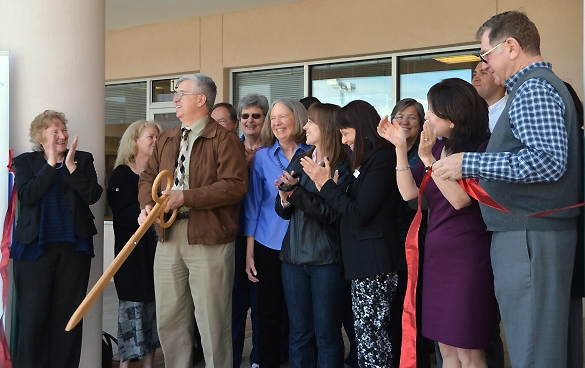 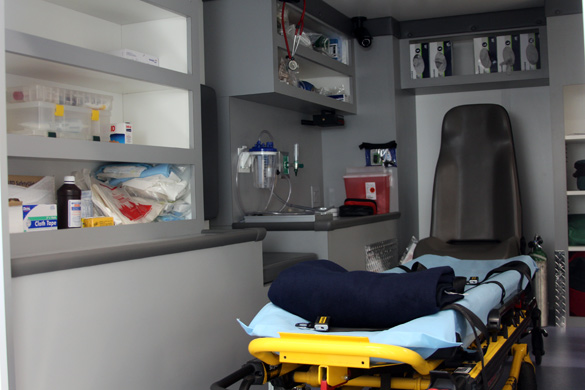 Interior of the simulated ambulance used for training at UNM-LA. Photo by Bonnie J. Gordon/ladailypost.com
By NANCY COOMBS
UNM-Los Alamos

Visitors gathered in front of the entrance of the facility as UNM-LA CEO Dr. Cynthia Rooney offered comments and introduced several speakers. Dr. Rooney explained that the college, working with individuals from the Los Alamos Fire Department (LAFD), started this EMS program in 2014. The number of students majoring in the program has grown from five students in 2014-2015 to more than 33 in 2015-2016. One course in the program is the EMT Basic course, and 39 students successfully completed that course last year, she said.

The remodel project had an estimated original cost of $625,000, and came in on time and under budget. The project was financed by $500,000 from New Mexico GO Higher Education Bonds, with $125,000 from UNM-LA student facility fees. In addition, more than $20,000 of equipment was provided by the New Mexico SUN PATH grant, which supports education for healthcare careers.

The first speaker, Sen. Carlos Cisneros expressed his pleasure at participating in the event. As the senator for Los Alamos, Rio Arriba, Santa Fe and Taos, he noted that this was the first time he has had the privilege of participating in a grand opening event in Los Alamos. The Senator shared that he was trained as an EMT earlier in his life, and he strongly believes in the importance of training for EMTs who have the potential of saving lives.

“Protect yourself, protect the community, believe in safety,” he said, and also encouraged attendees to vote for the next GO Bond, which would provide another $500,000 to UNM-LA to support further facility growth and maintenance.

Los Alamos Fire Chief Troy Hughes spoke next. He recounted that when he came to Los Alamos in 2011, although the LAFD was already performing at a high level, former Chief Douglas MacDonald challenged Hughes to take the department to an even higher level. At that time only two of the 11 LAFD chiefs had college degrees, and Hughes felt that education was an important facet of meeting MacDonald’s challenge. A partnership was formed with UNMLA to help LAFD enhance the educational opportunities available to LAFD.

“These programs help us as an agency, plus they benefit the entire region through the creation of well-trained emergency responders,” he said.

Today, all 11 LAFD chiefs have attained at least an associate’s degree, seven have bachelor’s or higher, and two have master’s degrees.

LAFD Division Chief of Training and co-chair for the UNM-LA Fire/EMS program Joseph Candelaria provided a further overview of the history of the collaboration between LAFD and UNM-LA. He discussed the educational methodology of scenario and problem based learning.

“It is our goal to place our students in a high stress environment where they can learn from both success and failure,” Candelaria said. “Our students are prepared to immediately implement their newly attained skills on the first day in emergency medical services field.”

LAFD Deputy Chief and the other co-chair for the UNM-LA Fire/EMS Steve Dawald thanked everyone involved in the growth and success of this program, “that was started on a napkin in a conversation with Joe.” He thanked the administration of UNM-LA and noted that the relationship between UNM-LA and LAFD is “solid and strong.”

Michael Wismer, the final speaker, stood at the podium with three of his colleagues from the Los Alamos Public Safety Association, to announce a new $1,500 scholarship for a Los Alamos student to participate in the UNM-LA program. “They have the best opportunity to learn right here,” Wismer said.

Visitors were treated to guided tours of the UNM-LA EMS facilities, which features and ambulance center, a technology enabled classroom and multiple areas for scenario based learning.

To learn more about this program or others at UNM-LA, visit http://losalamos.unm.edu. 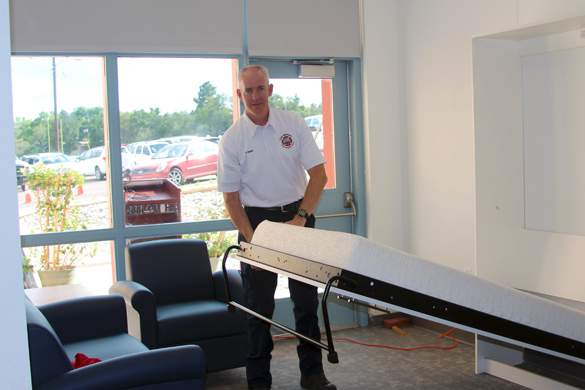 LAFD Deputy Chief Steven Dewald shows how a simulated living room can be turned into a bedroom. EMS students can practice moving patients from a variety of locations, including a bathroom. Photo by Bonnie J. Gordon/ladailypost.com 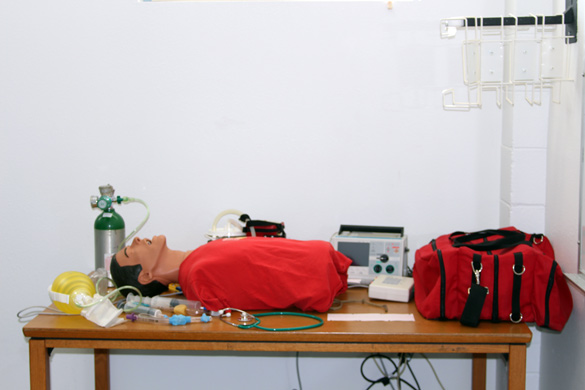 This CPR manniquin pictured here is computer controlled to mimic various conditions that might occur during CPR. Photo by Bonnie J. Gordon/ladailypost.com 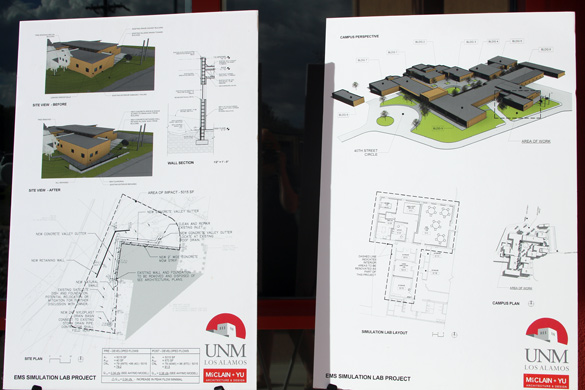