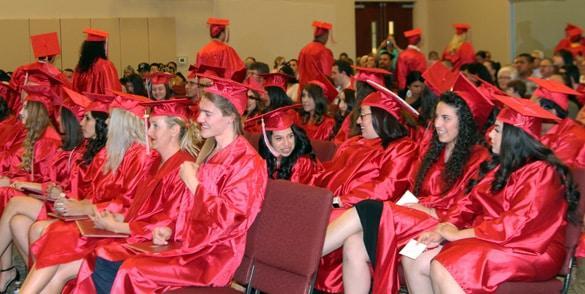 UNM-LA graduates head for the stage  to get their diplomas, while others wait their turn. Photo by Bonnie J. Gordon/ladailypost.com 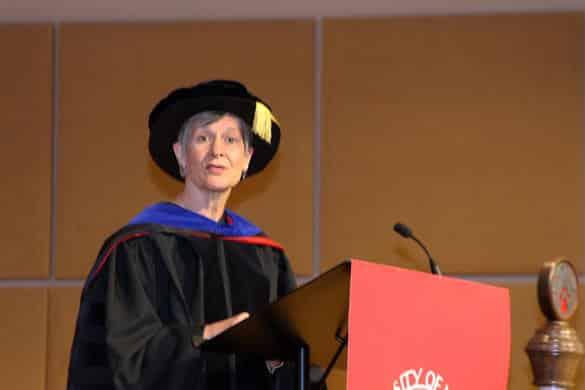 UNM-Los Alamos held its 37th Graduation and Convocation Thursday at Crossroads Bible Church. The evening got off to a rocky start when one of the graduates, Annalyn Martinez, was injured while crossing the street to attend the ceremony. Things got underway half-an-hour later.

Dr. Cynthia Rooney, CEO of UNM-LA led the processional, carrying the traditional ceremonial mace, which represents solemnity of the occasion and the authority of the university. This was the second appearance of the UNM-LA mace, which was donated last year by UNM-LA Advisory Board Member Pat Soran. The UNM-LA Faculty and around 50 graduates of various programs followed Rooney.

In her introductory remarks, Dr. Rooney celebrated UNM-LA’s largest enrollment ever for a spring semester. More than 1,150 students attended UNM-LA this spring.

Convocation Speaker Dr. Michelle Hall is a member of the UNM-LA Advisory Board. Hall is a geophysicist and science educator who has worked in both industry and academia. She co-founded Café Scientifique New Mexico, which brings teens together with scientists and engineers to explore the latest discoveries and learn about careers in science and technology. In 2012, she co-founded Teen Science Café Network, bringing programs to more than 120 sites in 42 states. An avid runner, Hall has run four Boston Marathons. She is married to LANL Director Dr. Terry Wallace.

“I got lucky in life and so did you,” Hall told the graduates, noting that all of them had received help from others on their journey to a diploma. Hall is the 9th of 11 children. Though sometimes it was difficult to stand out, “There was always someone around who loved me,” Hall said.

Growing up in a large family taught her about teamwork, taking responsibility and gave her good negotiating skills, Hall said. Hall is inspired by her father who grew up in an orphanage and dropped out of high school to join the Navy. He went on to build a successful life and career.

“My father had a simple strategy,” Hall said. “He’d learn to do the boss’s job, so when his boss was promoted, he was ready to step into his shoes.”

Like many of the graduates she was addressing, paying for college was a struggle for Hall.

Her savings and scholarships funded the first year and paid for tuition and her dorm, but food and books were still an issue. Hall solved the problem by working 30 hours a week at McDonalds, which offered, not only cash, but free food.

When Hall got her dream post doc, studying volcanoes in Hawaii, she had a five-year-old and a husband who needed to travel a lot. She was unsure, but her husband Terry assured her, “David and I will be fine.”

“I got my dream and we got the next 30 years together,” Hall said. “May you also be surrounded by many believers who support your dreams.”

Associate Degree Speaker Rosemary Sartor received her Associate of Applied Science in Robotics at the Convocation. Her UNM-LA memories stretch back to high school, when she served as a counselor at UNM-LA Children’s College and as a member of the Los Alamos High School Robotics Team. UNM-LA opened its machine shop to the team. It was there Sartor discovered her love of welding.

Sartor started at UNM-LA in 2016. She found a home in the Gaming Club, meeting others who shared her interests. Sartor found she enjoyed the hands-on aspects of robotics most. She has enrolled in Santa Fe Community College, to earn another AA degree, this time in welding. She hopes to become a welding inspector at LANL.

“UNM-LA put me on the road to a career I’m going to love,” she said.

Speaking for those receiving High School Equivalency Credentials, Misha Froman thanked UNM-LA for being there for her and her fellow HSE students. Numerous transfers during her high school years left Froman at a disadvantage and when she came to Los Alamos High School, she was no longer the straight A student she was used to being. She became discouraged and dropped out. UNM-LA was there for her and now she’s enrolled in an Associate Degree in Science program at UNM-LA. She, like many of her fellow students, came to the HSE program discouraged and unsure what to do. UNM-LA helped them get on track.

“We wanted success and we got it,” she said.

After flipping the tassels on their mortar boards to show their new status, the newly minted graduates left the hall to celebrate, and to face the new challenges ahead. 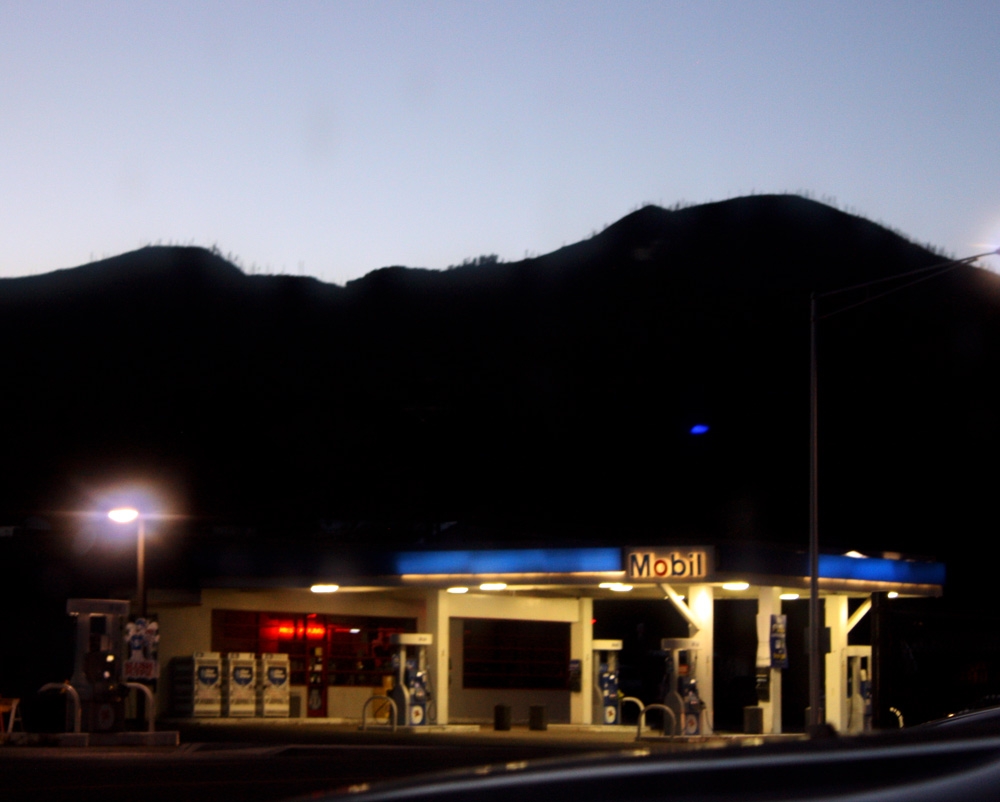 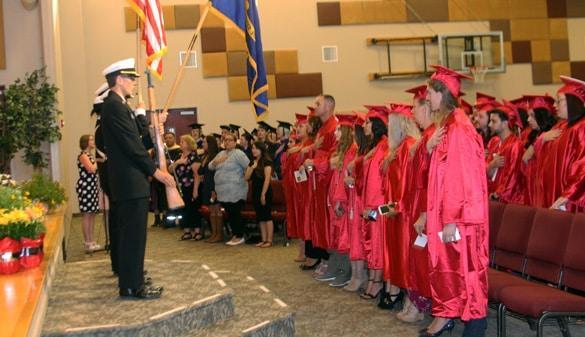 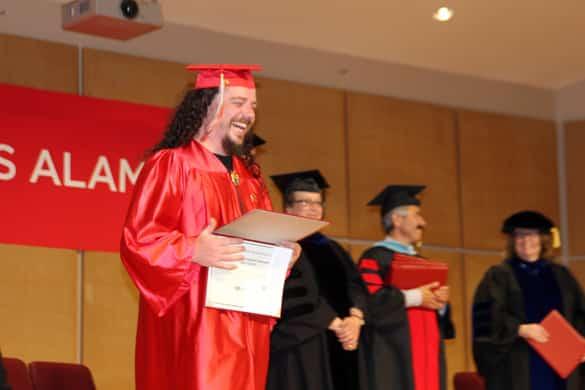 Alex Rose is thrilled to receive his diploma. Photo by Bonnie J. Gordon/ladailypost.com 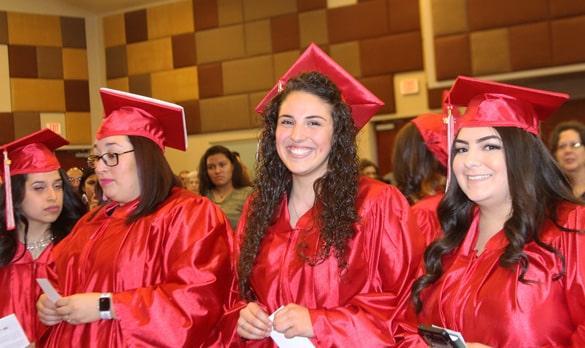 These grads are all smiles on graduation day. Photo by Bonnie J. Gordon/ladailypost.com 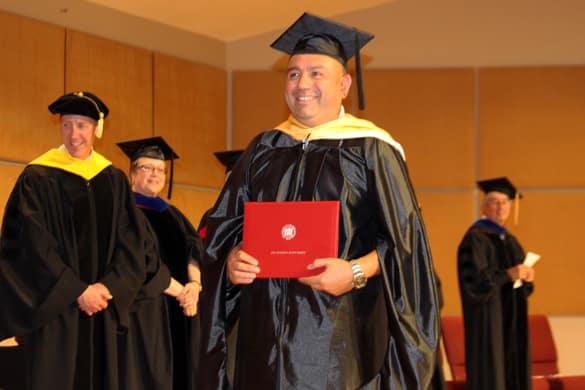 Founder of the UNM-LA Fire Science program Joseph Candelaria received a master’s degree from the University of New Mexico. He chose to receive it at UNM-LA graduation. Photo by Bonnie J. Gordon/ladailypost.com 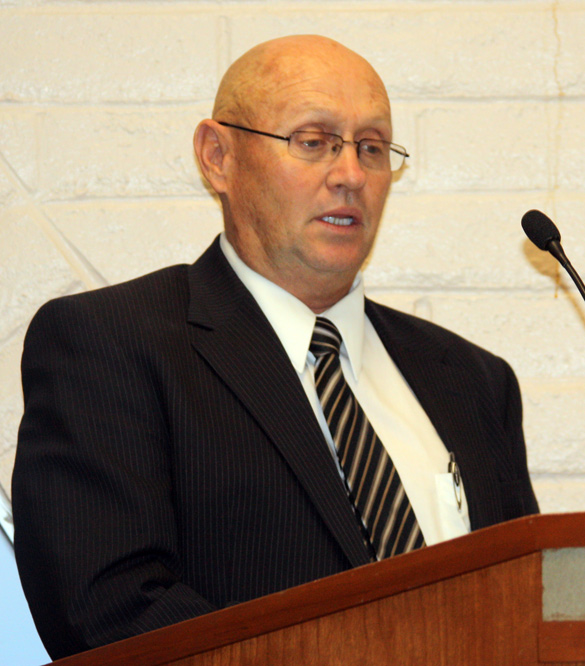