UNM-LA Advisory Board: No Tuition Increases 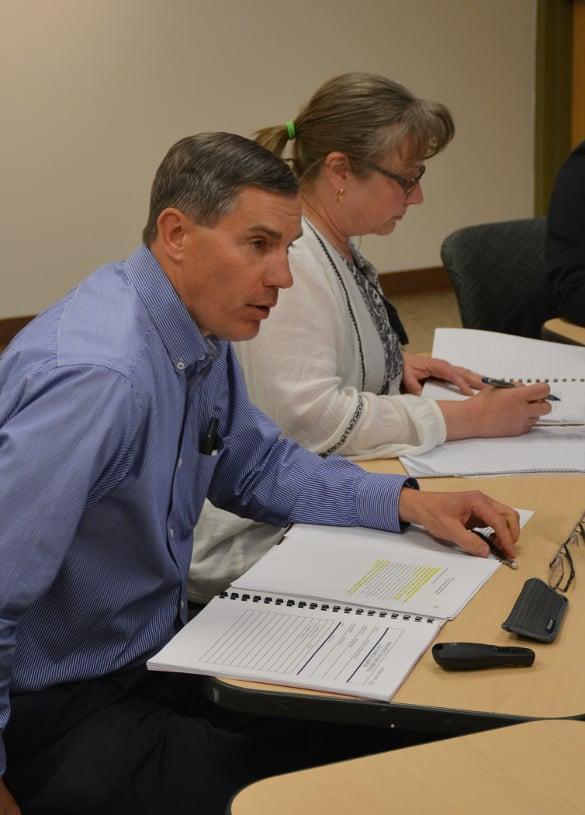 UNM-LA Director of Business Operations Bob Harmon addresses the Advisory Board about the FY19 budget with Dean of Instruction Sharon Hurley seated to his left. Photo by Nancy Coombs/UNM-LA
UNM-LA News:

Monday, April 2 the UNM-LA Advisory Board unanimously approved the FY19 budget, with a focus on maintaining and further developing services to the students and community without increasing tuition.
Bob Harmon, UNM-LA’s Director of Business Operations, presented the budget which he described as a relatively flat budget. UNM-LA projected revenues for next year have shifted, with a slight increase in state revenue, offsetting a slight decline in overall tuition revenue. Although enrollment at UNM continues to grow, much of the recent growth has been due to an increase of high school dual credit students, for which tuition is waived.
CEO Dr. Cindy Rooney stated “The budget process provides an opportunity for us to align our finances with our priorities.” The FY19 budget provides increased support to the areas of instruction and student support. UNM-LA will be offering additional classes and expanding career guidance services. Funds have also been allocated to hire more student workers, based on research that shows that students who work on campus have higher success rates related to degree completion.
During the legislative session, the state budget that was passed included recommendations for a 2% raise to state employees but ultimately did not fully fund the increase for all state agencies. For UNM, UNM-LA, and most higher education institutions, the additional funding from the state would support an increase of slightly less than 1%. UNM-LA, following guidance from UNM, decided to include in the budget for next year a compensation increase of 1% to qualified employees, with a potential additional 1-2% merit raise within the guidelines established by UNM. UNM-LA will cover the unfunded portion by restructuring spending. UNM-LA employees have not had an across-the- board salary increase since 2014.
“Recent years have been a period of positive momentum for UNM-LA,” Rooney said. “Enrollment has grown 2% since last spring, with a 22% increase since 2014. The number of degrees and certificates awarded to students has grown by 53% in that same period.”
Dr. Jerry Dominguez, UNM Branch Liaison, noted that “All the UNM branch campuses provide affordable options, allowing students to begin college close to home. They offer a pathway to the flagship university, UNM Albuquerque.” He offered his congratulations on UNM-LA’s success, during a time when decreases in enrollment have been seen throughout the UNM system, including a double-digit percentage decrease at two of the four branch campuses.
Rooney concluded, “I believe our success comes from our commitment to the community, our commitment to serving LANL, and the dedication of our faculty and staff.”
UNM-Los Alamos will host the graduation on May 10, with Dr. Terry C. Wallace, the Laboratory Director at Los Alamos National Laboratory delivering the commencement address.
UNM-Los Alamos is an innovative, rigorous, and affordable comprehensive branch community college that provides foundations for transfer, leading-edge career programs and lifelong learning opportunities.
Menu
LOS ALAMOS