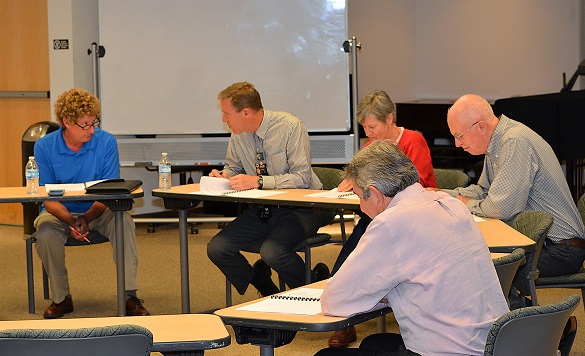 The UNM Los Alamos Advisory Board met Monday, April 10 in a Special Meeting to take action on the proposed fiscal year 2018 operating budget.

The Special Meeting to review and approve the upcoming budget occurs every year in April, but this year, with the seriousness of the state economy and the recent line item veto actions that eliminated funding to higher education by Gov. Susana Martinez, this year’s budget meeting faced significant challenges.

One constant theme that was repeated throughout the meeting was a resounding “Thank You” to the Los Alamos community for their support of the campus with the successful mill levy election in January of this year. Most New Mexico higher education institutions are embroiled in significant budget reduction exercises involving furloughs, lay-offs, or program phase-outs in order to meet the diminishing resources from the state. Some institutions are proposing budgets that utilize reserves to meet operating needs. Because UNM-Los Alamos had gone through extensive “belt tightening” measures in the past, and operated for years on very limited resources, the UNM-LA Advisory Board made the decision last year to ask the local community for support.

The successful mill levy election in January has made it possible for UNM-LA to avoid major cuts to programs and staff. The additional funding to UNM-LA approved by the voters in January will represent “new” money to the campus when the funds begin to be received in fiscal year 2018.

The budget, presented on Monday night, was prepared based on currently available information, with contingency plans and scenarios anticipating potential additional cuts also identified. During the recent legislative session, the proposed state appropriation to UNM-LA, before the recent line item veto by the governor, would have reduced total funding by 6.5 percent from FY17. This was a result of last year’s special session cuts and an additional 1 percent cut total higher education funding during the recent legislative session.

Ten years ago, the funding from state appropriations to UNM-Los Alamos represented 54 percent of all revenues. Before the Governor’s veto action, the proposed FY18 state appropriation to UNM-LA would have represented a reduction that amounted to 30 percent of all revenues. If the upcoming Special Session implements further reductions to higher education, the percentage will drop further.

UNM-LA Director of Business Operations Lisa Wismer noted, “The proposed budget approved by the Advisory Board included a recommended 4 percent tuition increase to students. UNM-Los Alamos has averaged a 6 percent tuition increase annually over the last ten years. The Board cited the growing enrollments and high quality of education as indicators of why students choose UNM-Los Alamos and value the instruction they receive. This recommendation by the Advisory Board must be approved by the UNM Board of Regents. A meeting to address proposed tuition increases for all UNM campuses has been delayed.

The budget was prepared keeping in mind the strategic priorities of the campus and the items that were noted during the Mill Levy campaign. UNM-LA CEO Cindy Rooney specifically noted that voters were asked to provide support that would:

UNM-LA Advisory Board President Steve Boerigter thanked the UNM-LA staff. He noted that the Advisory Board had been elected by the citizens of Los Alamos to represent the community.

“The budget process is simply a plan. I think that the budget that was presented represents the commitment to the items that were identified to the community during the mill levy campaign, and as the state budget situation is resolved, then we will adjust the plan as needed,” Boerigter said.

Boerigter also noted that the new resources as a result of the successful mill levy election has enabled UNM Los Alamos to plan for the future and continue to serve the community for years to come.