Universal News: This Just In – Gravity Waves Are Real 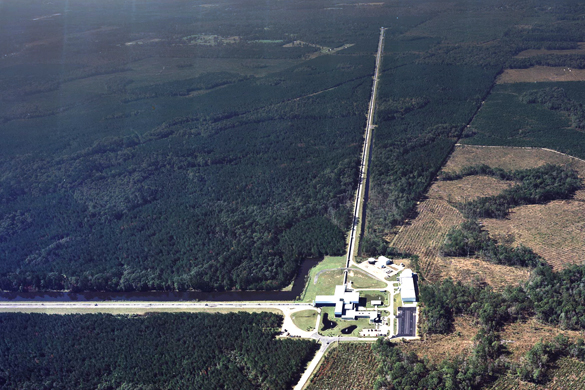 Gravity waves were detected in the universe for the first time on Sept. 14, 2015, a hundred years after they were predicted by Albert Einstein in his general theory of relativity. Even at the speed of light, they took 1.3 billion years to get here. The first detected gravitational waves were produced by a specific cataclysmic event, identified as two black holes coalescing, releasing enough energy in the last fraction of a second to warp time and space.

The gravitational waves were detected early in the morning during the first observational run of the upgraded instrumentation of the twin Laser Interferometer Gravitational-Wave Observatory (LIGO). The project began 50 years ago and has cost a large measure of faith along with more than a billion dollars of funding by the National Science Foundation.

As it developed and became a reality, LIGO consists of two L-shaped observatories, 1800 miles apart, one in Hanford, Wash., and the other in Livingston, La., At the heart of both observatories is an interferometer, a system that divides a laser beam into two beams that travel to and fro down the two-and-a-half mile arms in tubes kept in a near perfect vacuum, measuring the distance between the mirrors and capable of detecting movement as small as one-ten thousandth the diameter of a proton particle.

The gravitational waves that have moved LIGO’s needle are the most powerful explosions, apart from the Big Bang, that humans have detected so far. Two coalescing bodies were converted into gravitational waves representing a peak energy output about 50 times that of the whole visible universe. Two months later, a second observation was made, suggesting the opening of a whole new way of investigating the cosmos.

On Monday, Sept. 19 at a public talk in Santa Fe and on Tuesday, Sept. 20 in a Director’s Colloquium on the campus of Los Alamos National Laboratory, the Northern New Mexico community will have a chance hear a report from the front lines by Gabriela González, an experimental physicist deeply involved in the project, who is also the spokesperson for the international scientific consortium with more than a thousand members.

In a telephone interview this week González said she was asleep when the Louisiana LIGO detected the first signal, a tiny blip that was verified by the same signal received seven thousandths of a second later by the Hanford observatory. By the time González awoke there was a flood of email and text messages. “It took us a few hours to rule out it wasn’t a dream,” she said. “Everybody thought it was just a test.”

She said the next few months after the detection were “very dramatic,” with a lot of decisions to make about how to analyze the data and how to write it up. There were committees to review everything, all while the papers were being written. How many did they need to write? What should they say?

“With a thousand members of the LIGO consortium, there were thousands of emails, hundreds every day about all the different aspects,” González said.

Emil Motolla, a particle physicist and theoretical cosmologist at LANL, who is one of the organizers of González’s talk, said the detection of the gravitational waves was very exciting.

“Nobody ever doubted that gravitational waves were there,” he said. “In that sense it’s just a confirmation, but it is a confirmation.”

He said there would be new detectors on the horizon, one in Italy that is already well along, another in India that is a little farther out. Additional sites would add dimensionality more information about polarity of the gravitational waves to pinpoint where they are coming from in the sky, which would stimulate a more active search for counterparts.

Knowing what the signals are telling us about the sources opens up the whole field of astronomy and astrophysics, Motolla said. “You start to know what’s up there.”

The talk is Monday, Sept. 19 in the Grand Ballroom at the Eldorado Hotel in Santa Fe and is free to the public. Doors open at 7 p.m. and the talk begins at 7:30 p.m.

The Directors Colloquium at LANL is at 1 p.m. Tuesday, Sept. 20 in the Pete Domenici auditorium. 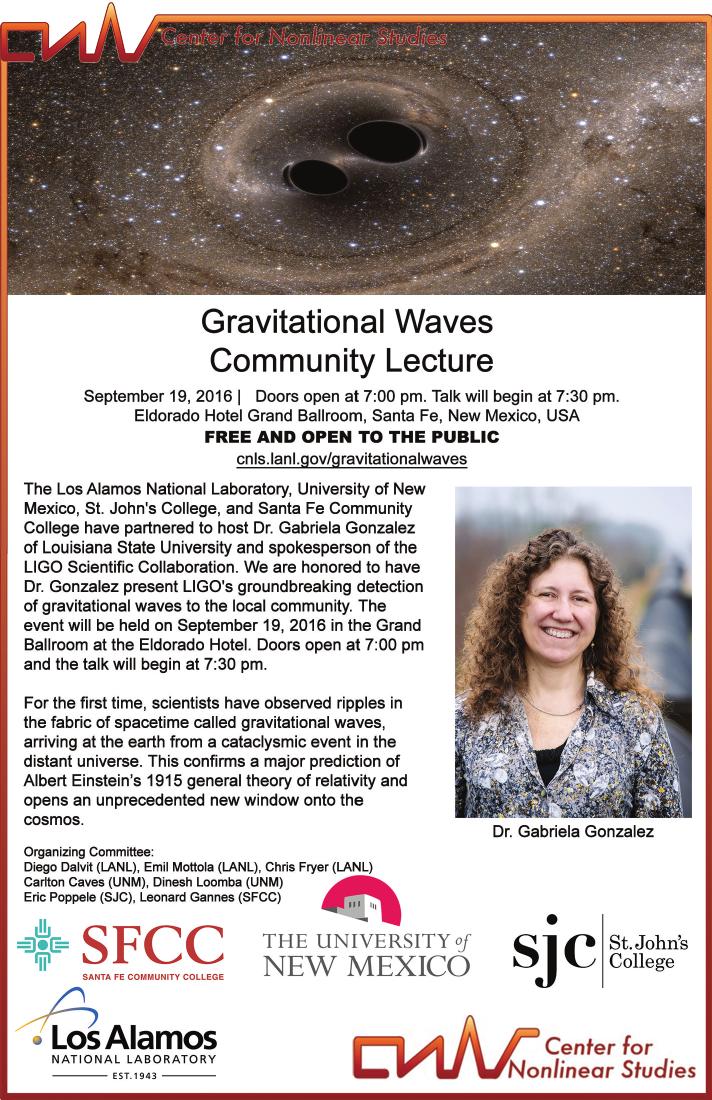