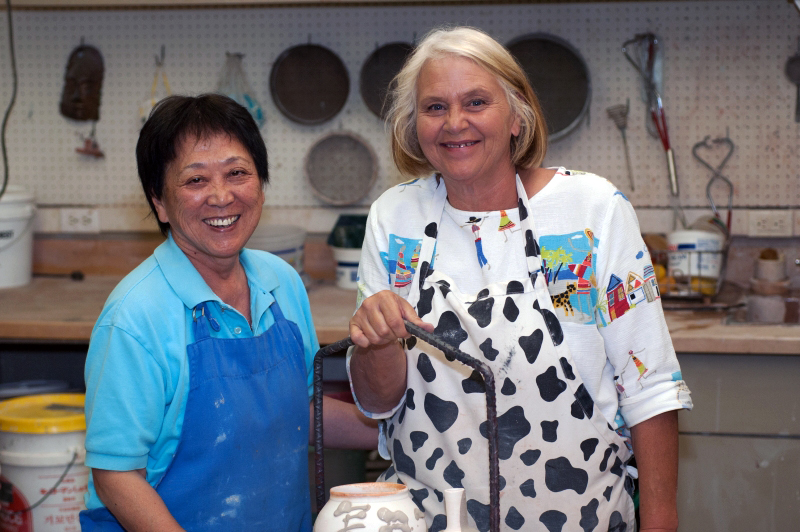 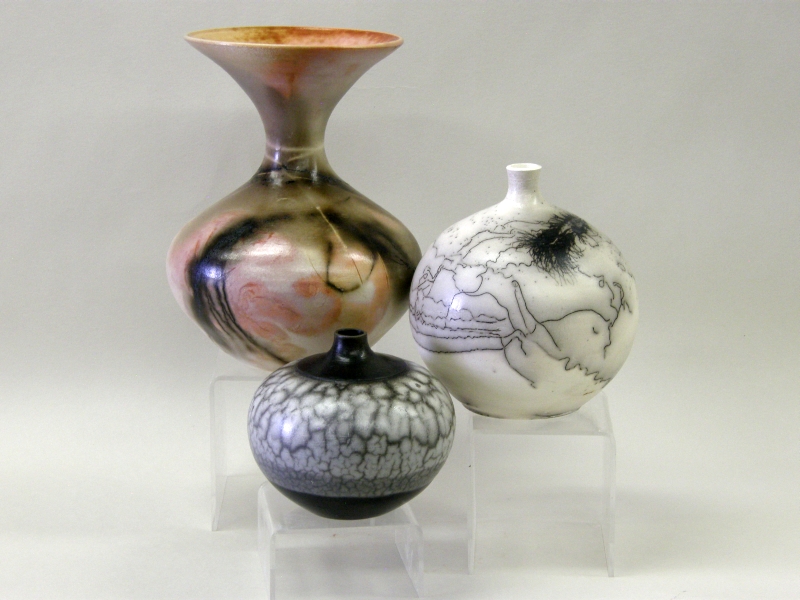 UNM-LA faculty member Barbara Yarnell along with longtime friend and student, SuFong Milonni, are exhibiting 27 pieces of their pottery featuring alternative firing techniques, through Oct. 18 at the UNM-LA library. An additional 20 pieces also are on display at the UNM-LA Student Union.

The pair has been working together since they met seven years ago when Yarnell began teaching at UNM-LA. A studio potter since 1977, Yarnell sold to galleries and at craft fairs but decided she knew enough to pass it on. She then pursued a career teaching her craft.

“This job just sort of fell into my lap, I love it, just love it,” Yarnell says.

“SuFong and I are great friends,” says Yarnell, who also is the General Studies Department Chair at UNM-LA. The two decided they wanted to do a show together and after some discussion, they decided to feature pieces that used alternative firing methods.

The three methods they settled on were aluminum foil rakur, which gives the piece a colorful, mottled surface of reds, pinks and browns. Next they tried horsehair reduction, which creates a contrast of black and white with bold patterns. Finally, naked raku, which uses a thick outer shell of slip that crackles during firing, allowing smoke inside the kiln to find its way to the pot’s surface through the cracks. The process leaves behind an intricate web-like pattern.

The three-month journey to this exhibit began with thumbing through books and magazines, selecting shapes that appealed to both artists. Each of them would take turns throwing the shape on the potter’s wheel.

“I usually threw it first,” Yarnell said. “That’s just the way it worked out. SuFong would then throw one.”

They each put their own particular spin on the shape. “It turned out the harder I tried to make it, it just never worked. I just let my own aesthetic interpret the shape. It was a much better shape and SuFong did the same thing,” she added.

When asked if there was ever any competition, Yarnell was quick to point out there wasn’t any. “That’s the wonderful thing about working with SuFong, we helped each other.”

The show is called Synchronicity. “It was not just in terms of throwing the same shape, but that in everything they tried, they were in sync,” Yarnell said.

There were wonderful surprises along the way. “It doesn’t happen very often, but there are times when you are in the moment, that golden hour when everything you do works,” Yarnell said.

She also noted that the whole experience was very liberating. As a studio potter, she says she had to be very specific, detailed and controlled. “Letting go was a really wonderful experience … I could breathe and be free.”

Just after the show was installed, Milonni packed her bags for Boston where she will be taking ceramics classes at Harvard this fall. Yarnell, being the close friend she is, offered to fill in for Milonni in her absence, providing a brief biography.

SuFong Milonni was born in China and fled to Korea during the war. There she received a scholarship to the University of Taiwan. Afterward, she taught math to support her family and then went on to graduate school in the United States. Yarnell laughed when she told the story of how Milonni went to the library to look at college catalogs. “She started with the “A’s” and applied to both Alaska and Arkansas and was accepted to both.” Milonni chose Arkansas where she received her Ph.D. in Physics.

Milonni met her husband while in Arkansas and then moved to Los Alamos to work at Los Alamos National Laboratory. After retirement, Milonni added pottery to her creative talents, which include writing poetry and practicing calligraphy for an hour each day.

The two friends are already planning another show next year, which will feature two-dimensional pieces made from clay. The creative synergy between the two is obvious. When asked about working side-by-side with Milonni, Yarnell said, “It was magic.”

For more information on pottery classes at UNM-LA, contact Barbara Yarnell at 505.662.5919 or visit the UNM-LA website at losalamos.unm.edu.