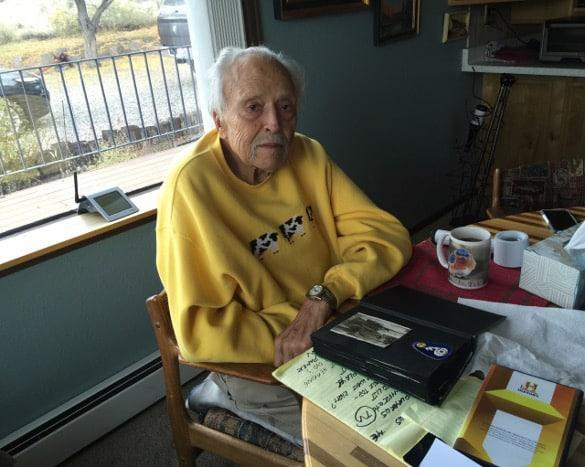 Reid Cameron and his Manhattan Project service patch. Photo by Sharon Snyder
By SHARON SNYDER
Los Alamos Historical Society
Sometimes a chance encounter can result in something unexpected. That was the case last August when I visited Mesa Verde National Park. I was wearing my Los Alamos Ranch School shirt with the embroidered logo when I met a volunteer ranger in the park.
We were enjoying a nice conversation when she noticed the logo and said, excitedly, “My husband’s uncle was at Los Alamos during the Manhattan Project!”
I immediately asked, “Is he still living?”
“Yes,” she said. “He lives in Grand Junction.”
“Does he have memories of his time at the Project?” I asked, hoping against odds, since even the youngest men at the Project would be in their 90s now.
“Yes, he does,” the ranger answered. “He loves talking about those days.”
That moment opened an opportunity that comes along rarely these days. Flash forward to November 4, 2017. Historical Society Director Heather McClenahan and I are sitting at a dining table across from 96-year- old Reid Cameron in his home along with his daughter and other family members who also want to hear his stories.
Research of the Manhattan Project is mostly done these days through online searches, reading books, and visiting archives. To experience what Heather and I did on that November morning is almost beyond description. Cameron was a member of the Special Engineer Detachment at Project Y, and his memory of those days in Los Alamos is still sharp. He answered questions for more than an hour as we videotaped a remarkable interview. Then he opened an old photo album of pictures taken during his days “on the Hill.” It was no surprise to see that the first thing in the album was his Manhattan Project service patch. Many of the photographs included his future wife, Helen Gowen, a WAC and chemist also assigned to the Project. Both continued their education after the war and pursued careers in their chosen scientific fields. Sadly, Helen Gowen Cameron died in 2015 at age 90, so we missed hearing yet another amazing story.
After leaving Los Alamos, Cameron was involved with a second famous moment in scientific history. In the early morning hours of December 20, 1951, near Arco, Idaho, a device known as the Experimental Breeder Reactor 1 lit up a string of four light bulbs to prove for the first time that reactors could be used to generate electricity. That was the beginning of the nuclear power industry, and Reid Cameron was one of the men who witnessed that event, one of the pioneers, the team led by Walter Zinn at the Argonne National Laboratory. His drawing of the ERB-1 assembly is framed and hanging in his Grand Junction home. He has also the model of that reactor that he took to the Brussels Worlds Fair in 1958. Today
ERB-1 is commemorated as a National Historic Landmark near Arco, ID.
Among other mementos in his home is a pair of wooden skis that he used on Sawyer’s Hill during the war years at Los Alamos. Cameron and his family showed us a hallway of photographs and a collection of historic artifacts, but what I remember most is a gentleman who made it possible for Heather and me to take a step back in time through his firsthand memories. Reid Cameron and his wife, Helen, are examples of the people we celebrate for their accomplishments and contributions to our nation.
Heather and I experienced a rare moment that doesn’t come often for researchers, but some days you just hit the jackpot. 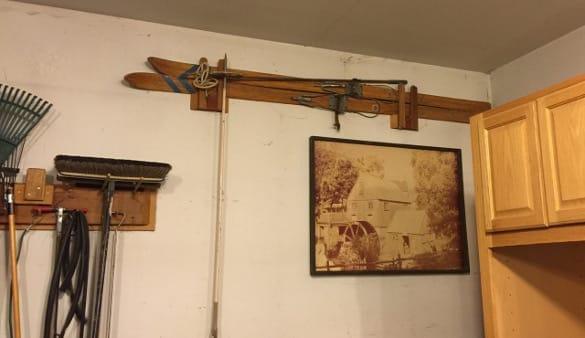 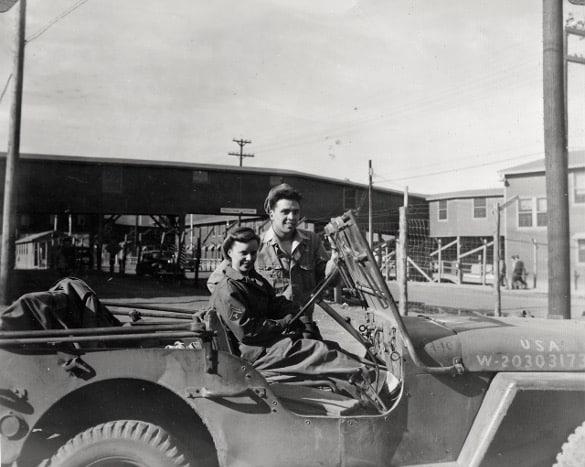