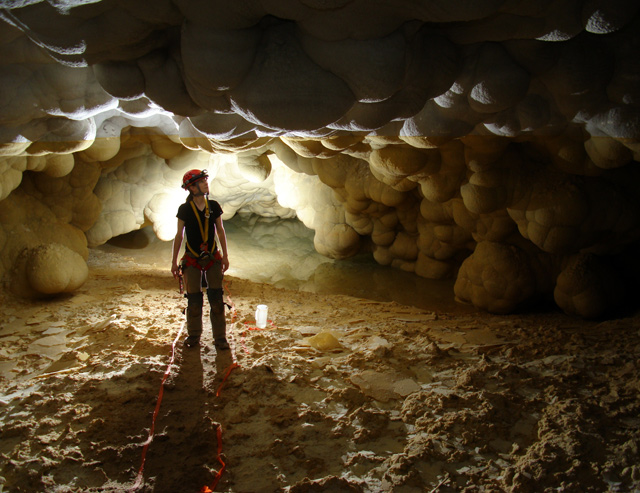 Underground of Enchantment is a 3D photo exhibit featuring the beautiful, magical, microbial secrets of one of the most interesting caves in the world – Lechuguilla Cave in southeastern New Mexico.

The cave is part of Carlsbad Caverns National Park and the exhibit originated with and is traveled by Carlsbad Museum and Art Center.

The cave holds a spectacular but fragile ecosystem, which was cut off from the surface until 1986. To protect this system, entry into Lechuguilla is restricted to exploration and science.

This exhibit gives the public a chance to glimpse the fabulous, varied forms and geologic features all in beautifully detailed 3D photographs and films.

Gosia Allison-Kosior, originally from Poland but in love with the surface and underground of the Land of Enchantment since 1995, curated this important look at one of New Mexico’s best kept secrets.

Lechuguilla Cave’s charm connected the group and their feeling of being privileged compelled them to share images of their expeditions with others. This was the moment when a dream about the exhibit was born.

Two different portions of Underground of Enchantment can be viewed at Mesa Public Library Art Gallery and PEEC. The library will show 3D photographic panels complete with 3D viewers and PEEC will show four short films in 3D about expeditions into the fabulous underground world. Both exhibits will be on show from April 5 through May 29.

There are several programs and talks planned about the exhibit including one with live bats at PEEC and one by Beth Cortright who is a caver and PEEC staff member who was also privileged to be one of few to enter and experience the majestic cave. See the full schedule of events below.

This exhibit and other library programs are made possible with support from the Friends of Los Alamos County Libraries. 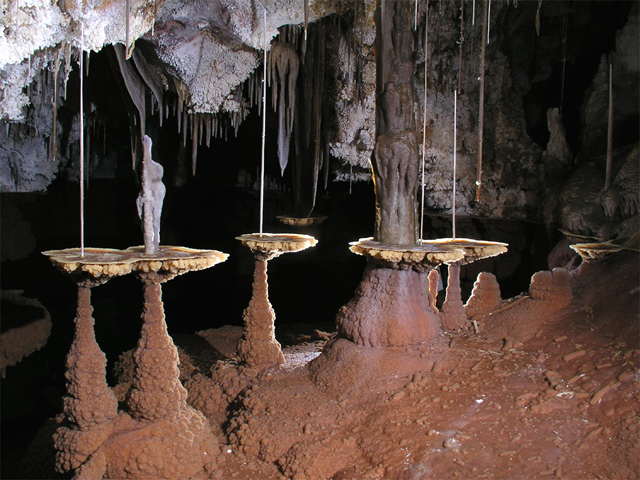 Mesa Public Library brings the Underground of Enchantment exhibit to Los Alamos. This 3-D photo exhibit and movie features the beautiful formations and microbiology of Lechuguilla Cave in southeastern NM. View the exhibit at Mesa Public Library during regular library hours and the film at PEEC 30 minutes before each program, during open hours, and by appointment. Through May 29. Free. MPL Opening 4-5:30 p.m.; PEEC Opening 5-6:30 p.m.

Since its discovery in 1986, Lechuguilla Cave has been known around the world as the most beautiful cave on earth. John Lyles will share the highlights of his 20 years involvement in the cave project, now 136 miles of mapped cave.  At PEEC Free. 6:30 p.m.

Tony Hinojosa will lead a caving outing to Alabaster Cave near San Isidro. Participants will make their way through the gypsum cave and eat lunch in the cool darkness. In-cave time will be around 3-4 hours. Obstacles include crawling, scrambling over rocks, traversing rock ledges, and squeezing through tight spaces in the cave. See equipment requirements and additional information on the website.  $24 members/$30 non-members. Please register in advance. Meet at PEEC at 8 a.m. to carpool, return around 5 p.m.

April 17: Natural History of Bats: Masters of the Night Sky

Wildlife biologist Debbie Buecher gives an overview of bat flight, echolocation, and resource requirements. Hear bat calls and see slides from Buecher’s research that illustrate the amazing diversity of bats in the Southwest. She will also show some live rehab bats! Designed for adults and children 2nd grade and up. $5 person $10 family; free for PEEC members. 6 p.m.at PEEC

Have you ever wondered what it would be like to live and work underground for a week? PEEC intern and caver Beth Cortright will present photos and videos detailing the basics of expedition caving. During expeditions in caves such as Lechuguilla in Carlsbad Caverns NP, teams are based out of a camp and the main goal is to safely survey designated areas. Free. 7 p.m. at Mesa Public Library.

May 14: Recent Discoveries in NM Caves

James Hunter, John Lyles, and Brian Kendrick will discuss and show slides of the discovery of Oz, an enormous passage that represents the largest discovery in the cave in more than 20 years. The slideshow is aimed at displaying the spectacular beauty of underground New  Mexico as well as the difficulty, danger, and team spirit that define expedition caving. 7 p.m. at Mesa Public Library. Free.