Udall Statement On Nomination of Ashton Carter As Secretary of Defense 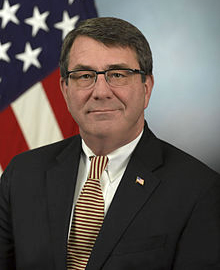 Ashton ‘Ash’ Carter
U.S. SENATE News:
WASHINGTON, D.C. – Today, U.S. Sen. Tom Udall, D-N.M., issued the following statement on the president’s decision to nominate Ashton Carter to serve as Secretary of Defense:
“The United States and the broader international community are confronting multiple quickly evolving threats in the Middle East, including the emergence of the brutal terrorist organization ISIS. Ashton Carter has the respect of senior military leaders having served under multiple secretaries of defense, managed large budgets and handled many demands under scrutiny. I have appreciated Secretary Hagel’s strong understanding of the strategic importance of our national laboratories to our national defense, and I look forward to meeting with Mr. Carter during the confirmation process to discuss his views on New Mexico’s national security mission.”
About Ashton Baldwin “Ash” Carter

Ashton Baldwin “Ash” Carter (born Sept. 24, 1954, in Philadelphia, Penn., is a physicist and was nominated by President Barack Obama Dec. 5, 20144 to replace Chuck Hagel as the United States Secretary of Defense. He was deputy secretary of defense Oct. 2011 to Dec. 2013, serving as the DOD’s chief operating officer overseeing more than $600 billion per year and 2.4 million civilian and military personnel, and managing global 24/7 operations. From April 2009 to October 2011, he was undersecretary of defense for acquisition, technology and logistics with responsibility for procurement of all technology, systems, services, and supplies, bases and infrastructure, energy and environment, and more than $50 billion annually in R&D.

Previously, Carter was a senior partner of Global Technology Partners focused on advising investment firms in technology and defense, and an advisor to Goldman Sachs on global affairs. At Harvard’s Kennedy School, he was professor and chair of the International Relations, Science, and Security faculty. He served on the boards of the MITRE Corporation, Mitretek Systems, MIT’s Lincoln Laboratories, and a member of the Draper Laboratory Corporation. Carter has been a member of the Defense Policy Board, the Defense Science Board, and the Secretary of State’s International Security Advisory Board. He was elected a fellow of the American Academy of Arts and Sciences, and is a member of the Council on Foreign Relations and the Aspen Strategy Group.

From 1993 to 1996, Carter served as assistant secretary of defense for international security policy, responsible for policy regarding the former Soviet states, strategic affairs, and nuclear weapons policy.

For his service to national security, Carter has on five occasions been awarded the Department of Defense Distinguished Service Medal. He received the Defense Intelligence Medal for his contributions to intelligence, and the Joint Distinguished Service Medal from the Chairman and Joint Chiefs of Staff. He was confirmed unanimously by the U.S. Senate for both the number-two and number-three Pentagon positions. Carter is author or co-author of 11 books and more than 100 articles on physics, technology, national security and management.