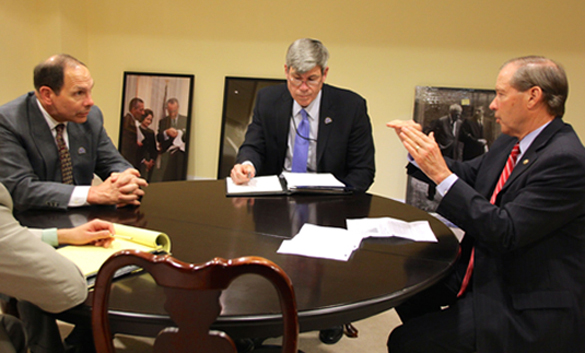 WASHINGTON, D.C. ― April 15, U.S. Sen. Tom Udall, a member of the Senate Appropriations Military Construction and Veterans Affairs subcommittee, met with Department of Veterans Affairs Secretary Robert McDonald to discuss the VA’s ongoing efforts to improve care for veterans in the wake of the appointment scheduling scandal that has affected the Albuquerque VA and other clinics in New Mexico.

Udall has called for independent and criminal investigations of the troubled Albuquerque VA hospital, and for improvements to scheduling, emergency response, the benefit claims backlog and other issues affecting veterans’ care.

Udall released the following statement after their meeting:

“Nearly a year since news broke of the VA’s ‘secret’ waiting lists and other unacceptable delays preventing timely care for veterans, some New Mexico veterans still have to wait more than a month to see a doctor. The Farmington VA ranks sixth worst in the nation for wait times, according to a new survey. The Albuquerque VA hospital and the clinics in Santa Fe and Rio Rancho didn’t fare much better. Our nation’s veterans deserve — and have earned — the best care we can provide. Secretary McDonald agrees, and we had a good talk about how to improve care in New Mexico. Simply put, the VA needs to step up its game and make sure every veteran who needs care can get through the door.

“Last summer, I helped pass critical legislation to hire more doctors and make other investments that is helping the VA decrease wait times for appointments and provide options for rural veterans. And on the Appropriations Committee, I’ve led efforts to increase funding to reduce the backlog of veterans’ benefit claims. We’ve moved forward nationally, but progress at the New Mexico VA has stagnated. That’s disconcerting, and I pressed Secretary McDonald to review the issue in New Mexico. The New Mexico VA’s new director is committed to progress, but he needs resources and support from McDonald’s team to make an impact.

“We also discussed directing more attention toward rural care and creative ways to address the challenge of recruiting and retaining doctors and nurses in New Mexico’s rural clinics. The VA still has a long way to go to earn back my trust, but I’m confident progress is possible.”

Udall also asked McDonald about the VA’s intentions for its new open-air burn pits registry, which Udall created through his Burn Pits Registry Act, and for McDonald to prioritize improvements to rural health care like the ones proposed in Udall’s Rural Veterans Improvment Act.

Udall recently pressed the Veterans Benefits Administration on the need to improve the process for approving and adjudicating veterans’ benefit claims.

Veterans who have having trouble making a timely appointment can call the VA at 505.222.3351 to speak with a New Mexico VA Health Care System staff member.